It’s no secret that dogs are some of the most popular pets in the world. It is estimated that 60% of all Americans own a dog, and if you’ve ever been a part of a dog-owning household, you probably know why. There are few other types of pets with which you can receive the same level of affection and interaction that you can with a dog, and for many families, their dogs are just as much a member of the family as the parents or children. The web is full of information and images of dogs, and dogs have even played an important role in art through the centuries, as far back as the heyday of the Greeks. It is often through these portraits that historians can trace the history of various dog breeds, and we can catch a glimpse into the fashionable trends of the aristocrats or the sporting culture of an era through these depictions.

And we know that after that introduction, you must be curious about dogs and art! Well, if you want to see dogs as the subjects of fine art, look no farther than BHL! We came across this delightful book entitled The Power of the Dog (1910/11), by Arthur Croxton Smith, which is brimming with glorious illustrations of various dog breeds, created by the artful hand of Maud Earl. The book portrays nineteen breeds, accompanied with descriptions regarding breed information and glimpses of the importance each played in early twentieth century life. But perhaps the most enchanting thing about the book is the way Maud Earl managed to capture not just the likeness, but also the personality of each breed in her art! For this post, we’ve picked five of our favorite paintings and included snippets of the information provided by the book on the breed. We know you’ll find these canines as adorably irresistible as we do and spend an additional few minutes browsing the rest of the images in BHL or on our Flickr account! 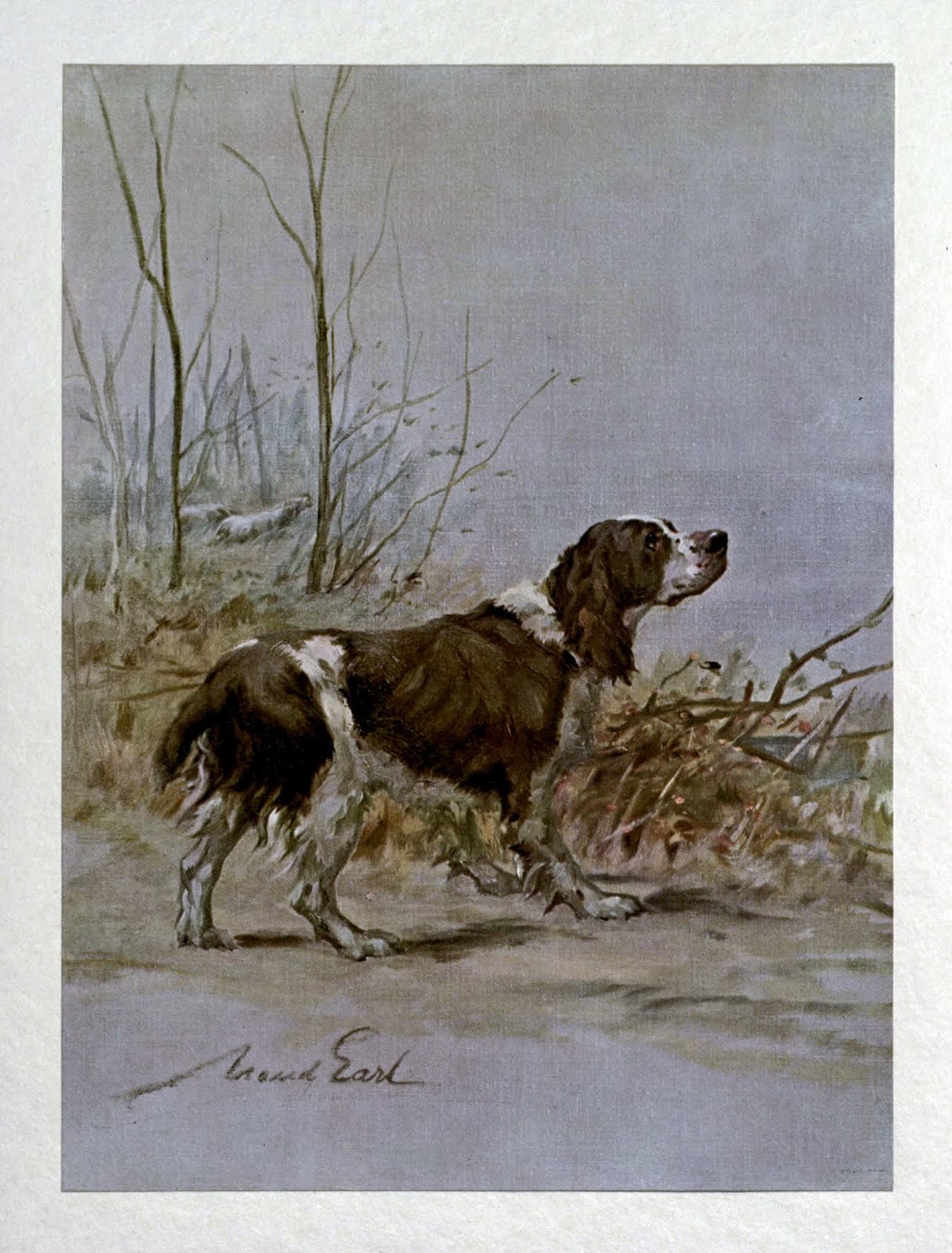 According to our book of the week, the English Springer “is designed primarily, by serving the sportsman in the field, to accomplish useful duties, but at the same time his docility of disposition, sagacity of expression and beauty of coat make him also a welcome companion when the day’s labours are ended.” At the time of the writing of the book, the English Springer was one of the least popular spaniel breeds, though the author argues that the breed is nearly unparalleled in its utility as a hunting companion. The name “is of good old English derivation, denoting the object for which the dog was employed – to spring birds to the net or gun.”

The author writes affectionately of one particular member of 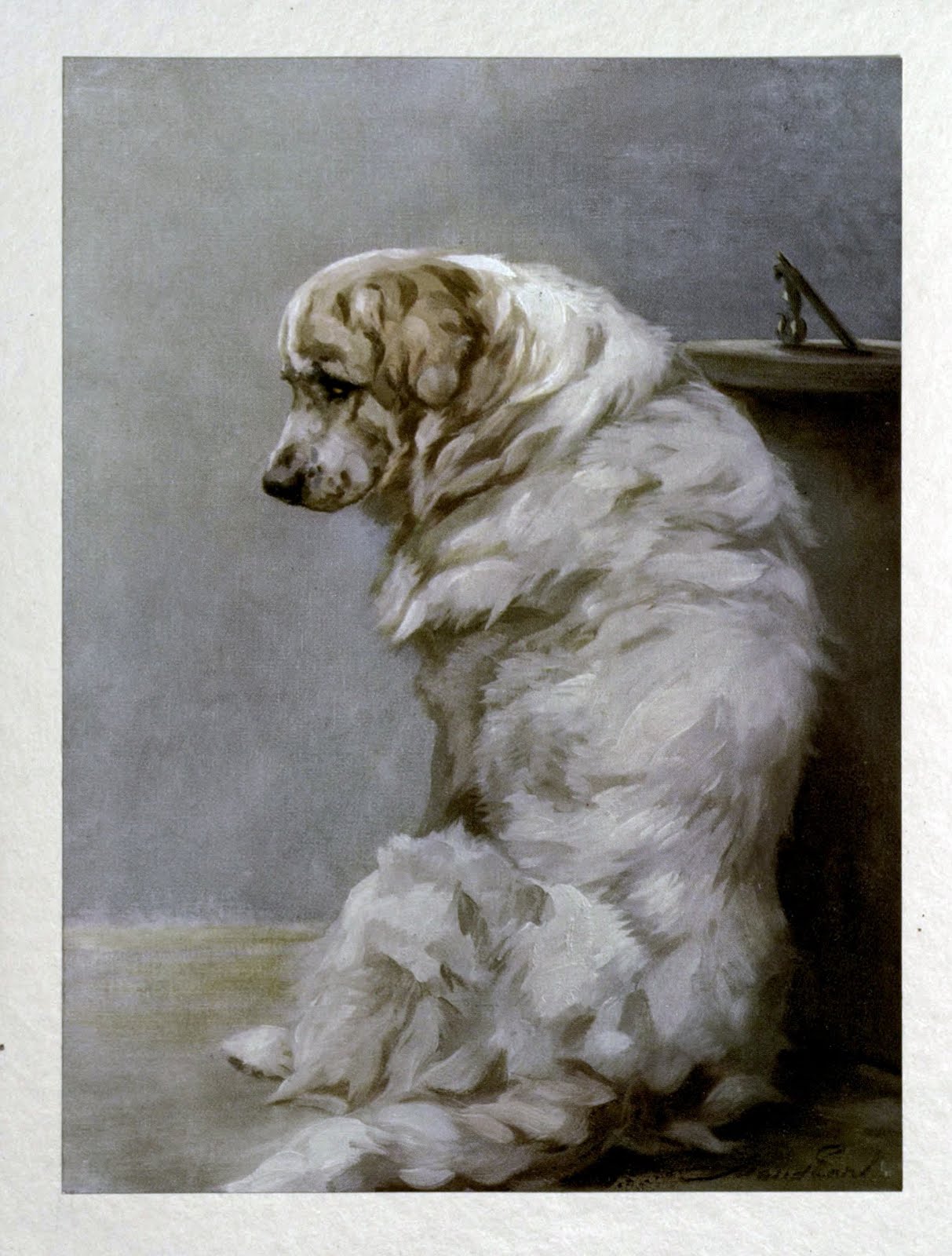 this breed, “With manners as charming and irreproachable as her looks, before many days she had won all hearts, becoming an important member of the household. That wise head of hers held brains which led her instinctively to adapt herself to her surroundings, and fall in with the habits and wishes of the human gods which formed her little world.” The book recounts a singularly charming story of the dog in question, Pandore, and her escapades with a garden hose. “The curious serpentine length stretched out on the lawn interested her vastly, and when she heard the sissling noise made by the air escaping from the nozzle as the water came on down went her nose to investigate. A sudden jet full in the face caused a precipitate retreat, and now as the hose appears there is much commotion at a diplomatic distance.” 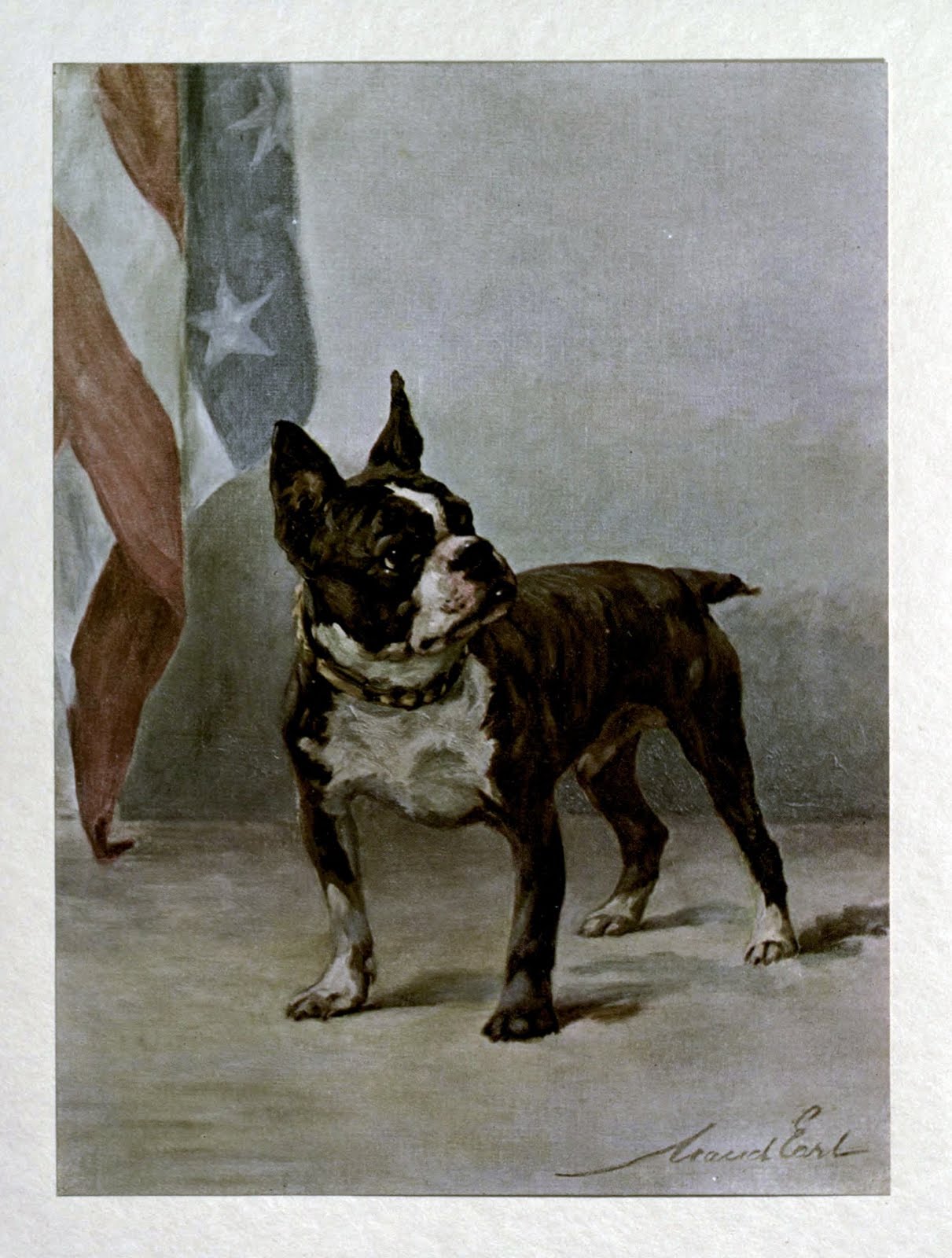 The book’s section on the Boston Terrier begins with the observation that America has produced few breeds of its own. The Boston Terrier, however, though being bred from “exotic” breeds imported from elsewhere, is one that America can claim. “Named after the ‘Hub of the Universe,'” this breed is an “active, game, ‘trappy’ little fellow, fit for my lady’s carriage or as a friend of the working man.” Though the breed had become a favorite pet of the Americans by the writing of this book, the author remarked that the original intentions for the breed were much more sinister. “My impression is that the desire was to manufacture a gladiator fit for the pit; and a cross between a bulldog and a terrier would be about as useful as anything for this horrible purpose. Fate, however, had in store for him a kindlier destiny than mauling his fellows and being mauled in return.”

Despite the fact that, as the author points out, the 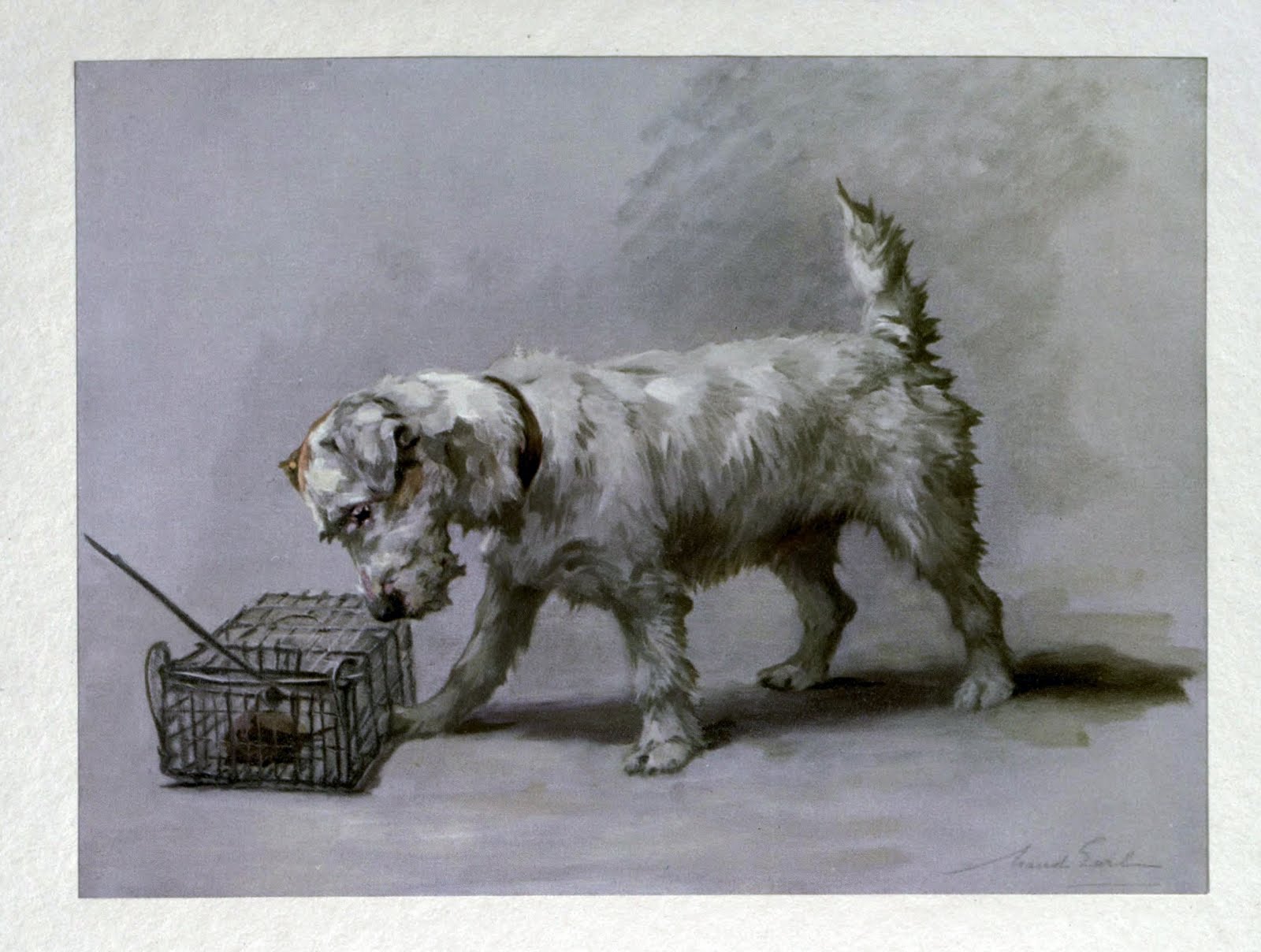 UK has produced an astounding plethora of terrier breeds, in the early 1800s, Captain Edwardes of Sealyham, Pembrokeshire, went about the process of creating a new breed, combining the best traits of several of the “old” terrier varieties. What he came up with was the Sealyham Terrier, seeking, the author presumes, “courage and stamina in a small body.” The exact breeds that were combined to produce the Sealyham are hotly debated, ranging from the Dandie Dinmont, the Bull Terrier, and the Welsh Cur. Though by the time of the writing of this book, the breed was largely established, there was still enough variety in the appearance of the various members to prompt our author to question the faithful perpetuity of the breed. He remarked, “All that we can hope is that in the future he will remain in the right hands, and not be made a pawn in the game of commercialism, or be allowed to degenerate into a carpet knight.” 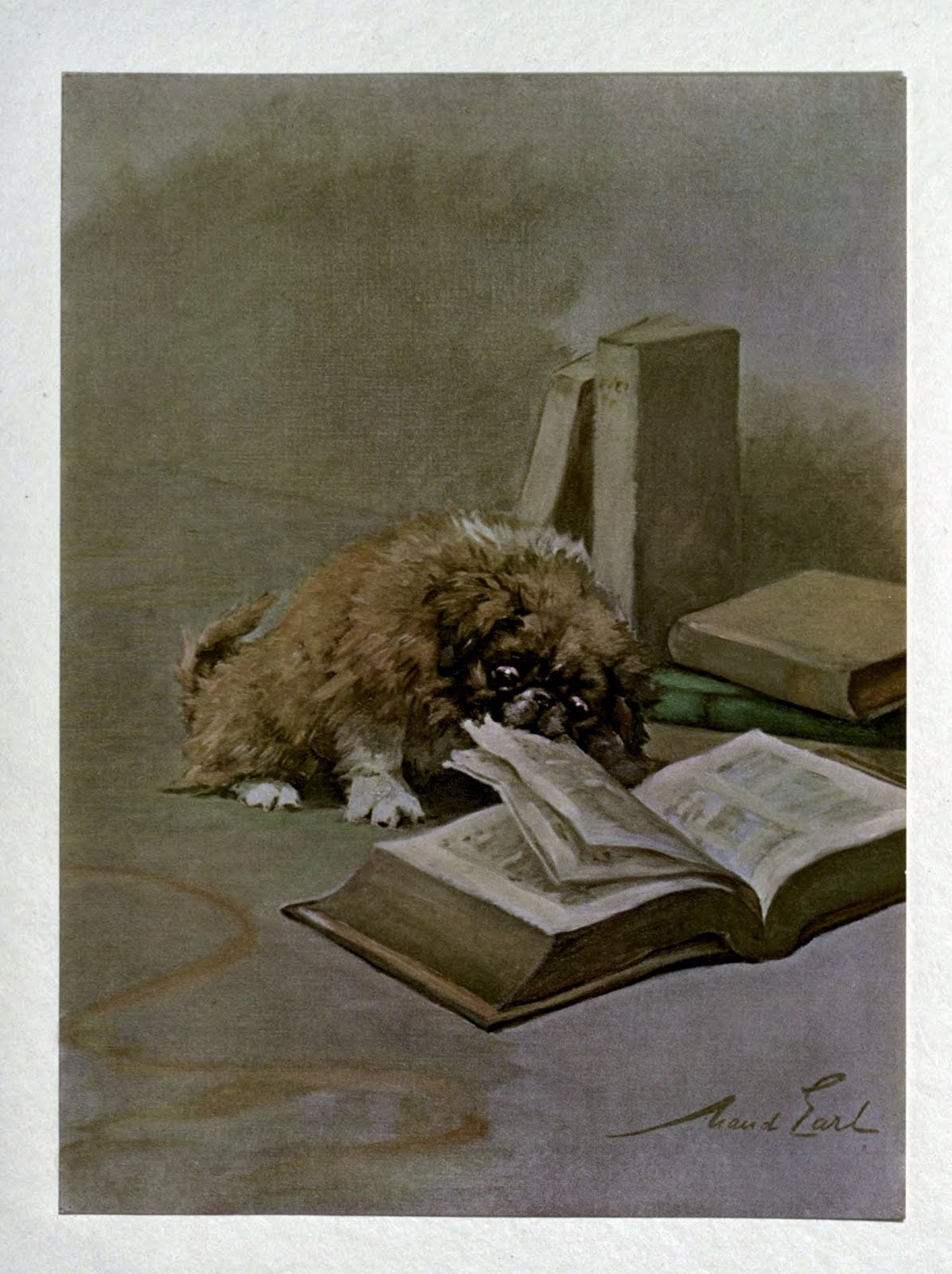 “To experience the fullest pleasure of the ownership of a dog it is necessary that he should come into our possession when young, before his intelligence is formed, and innumerable other impressions crowd his brain to the exclusion of those we wish to impart.” Such a statement outlines the first rules of having a puppy – that if you wish to own a well-behaved dog and enjoy a fruitful relationship with it, you must train it from an early age, lest he “tear up your favorite book.” If you are careful to do this, and avoid being too harsh with your puppy, Smith assures the reader that he or she will have a pet, and a companion, to cherish for years to come. Looking at this image, however, you might ask, “What is the fate of the merry mite so cleverly portrayed by Miss Earl? Youth passes, middle age comes, let him play and eat and sleep while the zest is on him, so that on the advent of maturity with all its troubles he may seek consolation in the memories of a happy puppyhood.”

Don’t forget to take a look at all of the fantastic images from this book in our Flickr account! 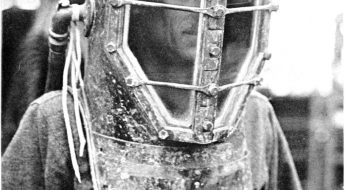 Book of the Week: Beebe, Barton and the Bathysphere 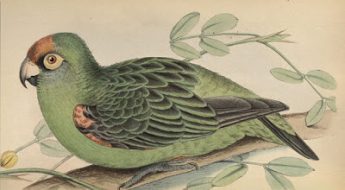