Ursus maritimus: A Shining Star in the North Pole

As part of BHL’s Winter Appeal, we’ll be highlighting some of the amazing species that are especially well-adapted to cold, wintery climes as well as those that often come to mind as we celebrate the winter holidays.  Each post will include images, facts and sometimes even stories drawn from the pages of the open access literature in BHL.  The ongoing growth of BHL is supported in part by our dedicated patrons whose gifts we depend on for the the digitization of additional literature, technical development of the program, and improvement of data curation.  We hope you’ll consider donating this holiday season!

Imagine being out in a quiet, cold landscape with almost nothing around for miles except for the ice and sea.  In this vast expanse of calm and quiet, you might either wander across the ice in search of a meal or even dive down into the freezing cold waters.  Either way, you would remain quite comfortably warm.  Thus is one of the advantages possessed by Ursus maritimus for surviving in this challenging environment.  A thick coat of fur and insulating layer of fat provide warmth and the distinctive white coloring of the coat serves as excellent camouflage when stalking prey.  A long neck and relatively narrow skull for the species provides the aptly-named “sea bear” with a streamlined figure excellent for swimming.

Commonly known as the polar bear, Ursus maritimus actually only occurs in one of the poles–the North Pole.  The vast, ice-covered ocean known as the Arctic actually has etymological roots in the ancient Greek word, ἄρκτος, meaning bear.  Antarctic, therefore implying “no bears.”

When we consider the growing concerns about the effects of climate change on places like the Arctic, polar bears are one of the iconic species that immediately come to mind for many of us.  How might they fare over the next decades?  Despite all of their physical advantages and their placement as an apex predator, polar bear populations have seen recent declines and are already considered a vulnerable species by the IUCN.  Some of the biggest threats facing polar bears are the melting ice cap, hunting, and human development in the area, including oil spills and other negative impacts on the environs.

Yet even before climate change was a prominent topic in science and the news, polar bears held a special place in the public’s imagination.  Tales of exaggerated ferocity were plenty.  One especially eyebrow-raising account tells of the polar bear’s invariable habit of charging at any man encountered.  While today we know that polar bears have been known to attack humans they are just, if not more likely, to avoid such encounters, yet this story goes on to insist that not only do they inevitably charge, they can just as inevitably be tricked into grabbing weapons and committing suicide with them.  Polar bears were undoubtedly less studied and therefore not as well understood in 1861, yet even so the author seems barely able to contain his bemusement at the extraordinary claims of this “eye witness.”  Today, hunting bans now help to protect this magnificent species.  Groups like BHL and our partners EOL work hard to make sure that scientists and others have access to important information about the species, its habitat and behavior so informed conservation decisions can be made.

The polar bear is documented in over 1,200 pages of open access literature made available through the Biodiversity Heritage Library.  BHL relies on donations from individuals to support scanning of the biodiversity literature held in some of the world’s most renowned natural history and botanical libraries.  To learn more about how your donation supports the continued growth of BHL, please visit http://archive.constantcontact.com/fs181/1103622715135/archive/1115465985290.html.  We hope you’ll consider making a contribution today! 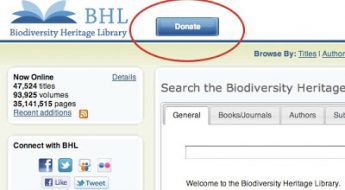 Another Way for You to Help BHL: Make a Donation

« Previous post
Basionyms, Synonyms, Authorities: Tracking the Names of Macro- and Micro Algae Through Time
Next post »
The Collector Connection: organizations and the individual collectors who shaped them