This blog post incorporates research conducted for the digital exhibition, “Wild Mouser to Household Pet: A History of Cats in Science and Society, 1858 to 1922.” Click here to check out the exhibition and book collection!

In the nineteenth and early twentieth centuries in the United States and Europe, cats were just beginning to be seen as household pets. Previously, they were viewed as biological specimens for medical study, muses for literature, and mousers that roamed around killing rodents. The way that people saw cats often involved a comparison with dogs. But how different are these two species? How did people perceive of those differences and similarities in the nineteenth and early twentieth centuries?

Authors compared cats and dogs in order to claim their favorite as superior. For example, in Domesticated Animals, Their Relation to Man and His Advancement in Civilization (1895), Nathaniel Southgate Shaler wrote:

Cats deserve some mention for the reason, that, while they are the least essential, and on the whole the least interesting, of domesticated animals, they have had a certain place in civilization. They afford, moreover, a capital foil by which to set off the virtues of the dog [1].

Clearly, Shaler is fond of dogs. He highlights one of the starkest differences between cats and dogs: their usefulness. While dogs were domesticated by humans to perform a variety of tasks such as hunting, cats never had much of a purpose beyond “mousing” (catching rodents, especially on farms with grain storages). This limited purpose led to less variation in cat breeding. However, cat enthusiasts still did breed and exhibit purebred cats.

Another point of dissention between cat and dog fans was which was more intelligent. Most believed that dogs were smarter. Author Dorothy Champion sums up the common beliefs and her take:

How often one hears the remark, ‘How stupid cats are!’ or, ‘Cats cannot compare with dogs for cleverness.’ This is a point on which many people make a great mistake… I have come to the conclusion that an uneducated cat has far more brains than an uneducated dog. Doubtless the dog is easier to teach, as he can be made to do things, whereas the cat is of an independent disposition [2].

Those trying to counter the belief that dogs were smarter had to fiercely defend the intellect of the cat and provide examples to bolster their claim. A common way to do so was to cite their ability to remember how to get from one location to another, even across long distances. However this ability was also turned into a fault, with some authors claiming that cats are more attached to locations than they are to people.

Another element of comparison between cats and dogs was the extent of their domestication. There are a few ways to approach this topic. One way is to go back and study their original shift from wild to domesticate. New scientific studies using ancient DNA are uncovering clues about the origins of this shift [3]. While the exact details are debated, everyone agrees that cats were domesticated more recently than dogs. In fact, twentieth century authors questioned whether or not cats really have been domesticated at all:

He never was but half-domesticated at best, and while he is a universal favorite with children because of his furry coat and look of seeming intelligence, he is yet essentially a wild animal, almost incapable of true domestication. He has lost little of his innate savagery, and as a relentless foe of birds he has really become an enemy to our civilization[4].

While this account is definitely one of the more severe critiques of cats, the sentiment that cats remained wild and were posing a threat to wildlife was gaining popularity in the beginning of the 1900s.

Another way to approach the topic of domestication has to do with nineteenth century conceptions of domesticity. Cats were believed to have a particular affinity for the home, and became associated with the household, and by extension, women. Conversely, dogs were known to travel outside with their owners, tagging along for masculine activities like hunting.

For more information on the link between cats and women in this time period, see this blog post.

By comparing their usefulness, intelligence, and domestication, nineteenth and early twentieth century authors debated the merits of cats and dogs in very similar ways that we do today.

*For more information about domestic cats in the nineteenth and early twentieth centuries, see the digital exhibition “Wild Mouser to Household Pet: A History of Cats in Science and Society, 1858 to 1922.”

Madison Arnold-Scerbo was a Junior Fellow Intern at the Science, Technology, & Business Division of the Library of Congress. 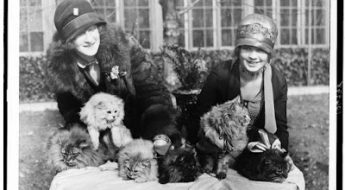 Cats & Women: Why the Connection?