Mycroporus affinis, photo by Robert Gergulics. The Mycophile, v. 57, no. 6. 2017. Contributed to BHL by the North American Mycological Association.

“Birds, flowers, insects, stones delight the observant. Why not toadstools? A tramp after them is absorbing, study of them interesting, and eating of them health-giving and supremely satisfying.” – Charles McIlvaine (1840-1909), mycologist

“We explore all aspects of fungi, including edibility, toxins, dying fabric, cultivation, using mushrooms to support the environment, potential medicinal applications, and photography,” says NAMA President David Rust. “This working relationship between amateur volunteers and professionals helped self-taught mycologists like Gary Lincoff [author of ‘National Audubon Society Field Guide to North American Mushrooms’] to learn and document developments in the field before such information sharing became routine on the Internet.” 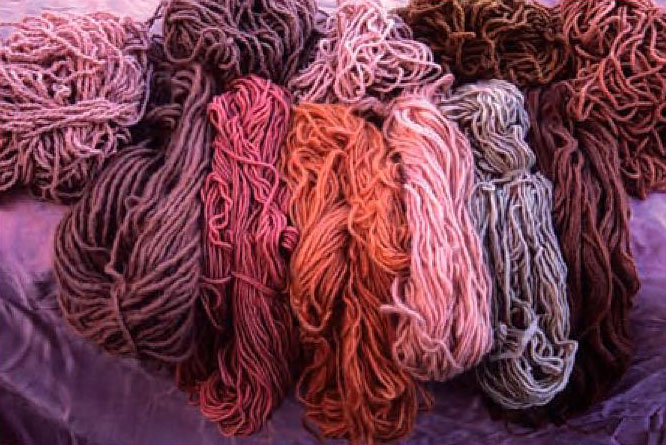 Wool dyed with Cortinarius semisanguineus, photo by Noah M. Siegel. The Mycophile, v. 49, no. 2. 2008. Contributed to BHL by the North American Mycological Association.

In that spirit of collaboration and open access, NAMA licensed its journal McIlvainea (named for mycologist Charles McIlvaine of the epigraph) and newsletter The Mycophile to BHL as a part of the Expanding Access to Biodiversity Literature project, funded by the Institute of Museum and Library Services. NAMA made digital copies of its publications available to project staff members and volunteers at The New York Botanical Garden for uploading into BHL. (The Mycophile is currently available on BHL, with McIlvaninea upcoming.)

“The Mycophile is our bi-monthly report on developments in the field of mycology, in particular amateur mycology; book reviews; club activities; and the accomplishments of our affiliated clubs,” Rust explains. “The newsletter reports on our annual foray, a gathering of approximately 350 mushroom enthusiasts where we collect, document, and voucher specimens of all types of fungi found at that location. These fungi end up in The Field Museum of Chicago and are entered into a database which is now available to the public on their website. NAMA has over 20 years of mushrooms and data available to researchers at The Field. In McIlvainea, we publish an annual report on mushroom poisonings around North America, gleaned from poison control centers and incidents reported by our network of 150 emergency mushroom identifiers. We also publish articles by renowned mycologists on current taxonomic developments and new research.”

“Our newest initiative, the North American Mycoflora Project, will provide a look at all fungi on the continent which have not been properly classified or named,” continues Rust. “It would provide online keys and downloadable applications, up to date distribution maps, links to macroscopic and microscopic images, and links to nucleotide sequences and phylogenetic trees.” 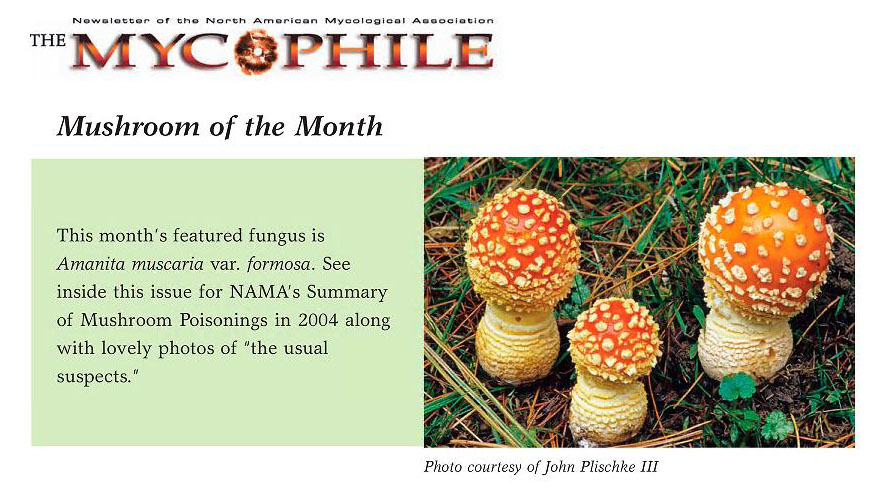 Unfortunately, not all fungi are “health-giving”… image caption reads: “This month’s featured fungus is Amanita muscaria var. Formosa. See inside this issue for NAMA’s Summary of Mushroom Poisonings in 2004 along with lovely photos of ‘the usual suspects’.” The Mycophile, v. 46, no. 3. 2005. Contributed to BHL by the North American Mycological Association.

As well as sharing more recent initiatives, these publications have value as records of past mycological study. In ‘Mycology Meets History: The NAMA Archive’, a 2008 Mycophile article, David W. Rose elaborates on the value of the organization’s record keeping:

“In the case of the NAMA records, there is, for example, a file of documents on every annual foray complete with programs, board agendas and meeting minutes, mushroom collection lists, participants lists, and photographs; and this detailed abundance is a testament to an organization that takes science, history and its educational mission very seriously.” 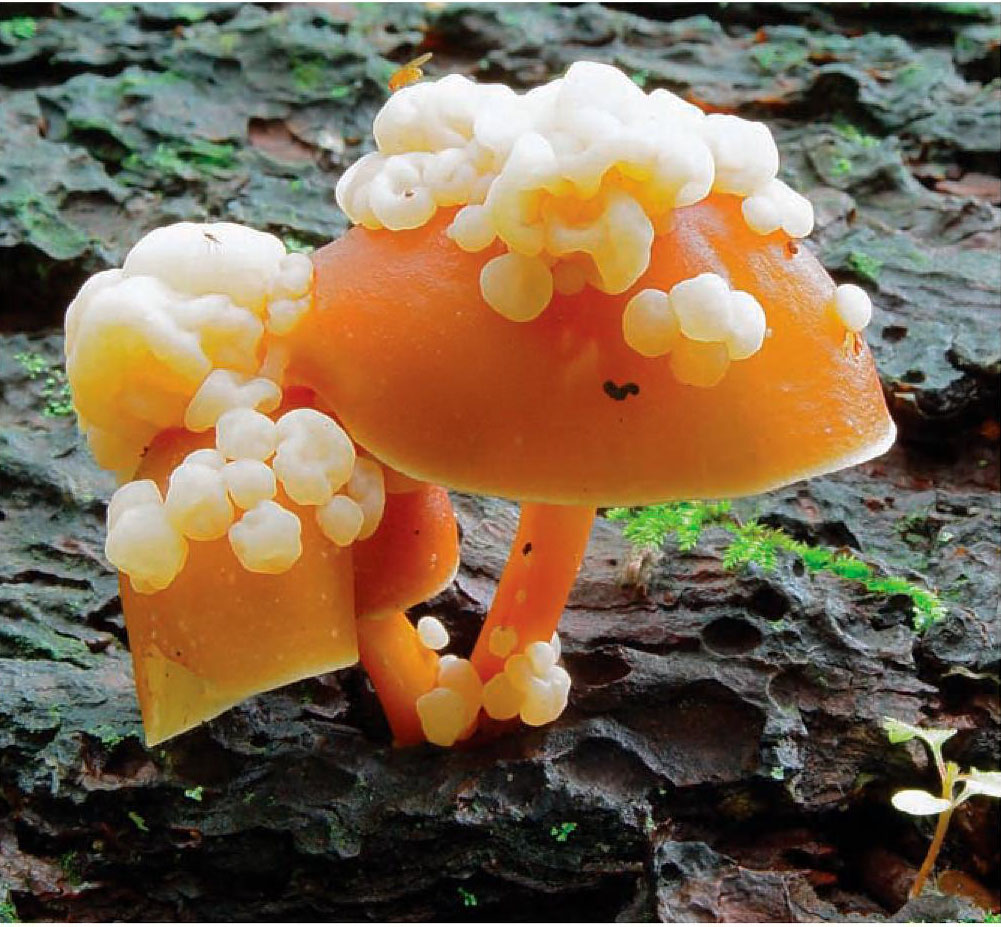 This article also closes with a punchline on the dangers of mycological work that is just too good not to share.

“The moral about ‘history lost’ bears repeating, in an anecdote that should have special resonance for mycologists. One huge collection that I processed in my archival work at the New York Botanical Garden was the William Jacob Robbins Papers. Robbins was a plant physiologist and Director of the Garden from 1938-1958, and though he is scarcely remembered for his mycology, he conducted a lengthy series of chemical assays of many species of fungi in the 1950s in the attempt to determine potential sources of antibiotics. […] his laboratory notebooks were extensive, and I organized and catalogued them all. All his note-books were clear labeled by genus or by species […] Most were in good condition, some were in bad shape. The final lab notebook in the series was labeled ‘Various Molds,’ and it had been damaged, unfortunately: completely covered by – you guessed it – various molds.” 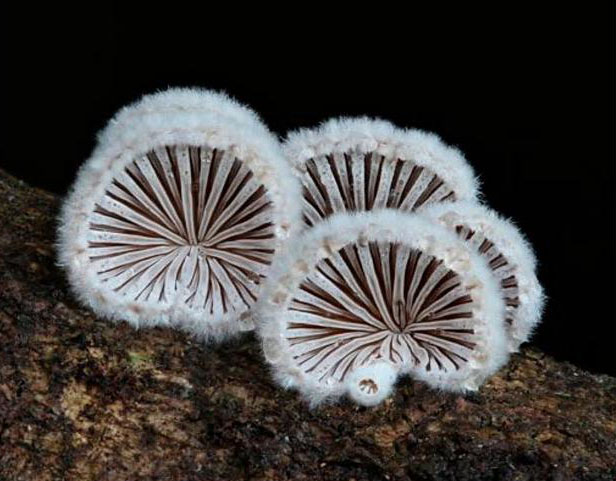 Schizophyllum commune, photo by Mark Bower. The Mycophile, v. 57, no. 6. 2017. Contributed to BHL by the North American Mycological Association.

Many thanks to NAMA for sharing its publications with BHL, and to David Rust for contributing to this post! 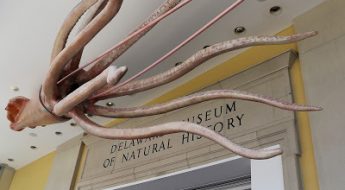 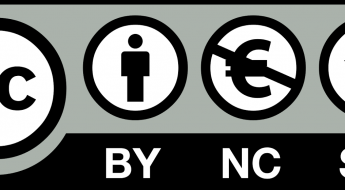 In-copyright Titles from the 2nd quarter of 2017 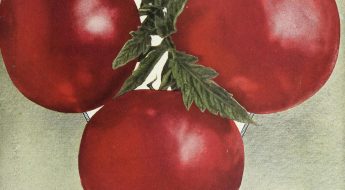 « Previous post
Field Note-Worthy: Thousands of Field Notes Now Available in BHL Thanks to the Field Notes Project!
Next post »
Myrtle: The Provenance and Meaning of a Plant