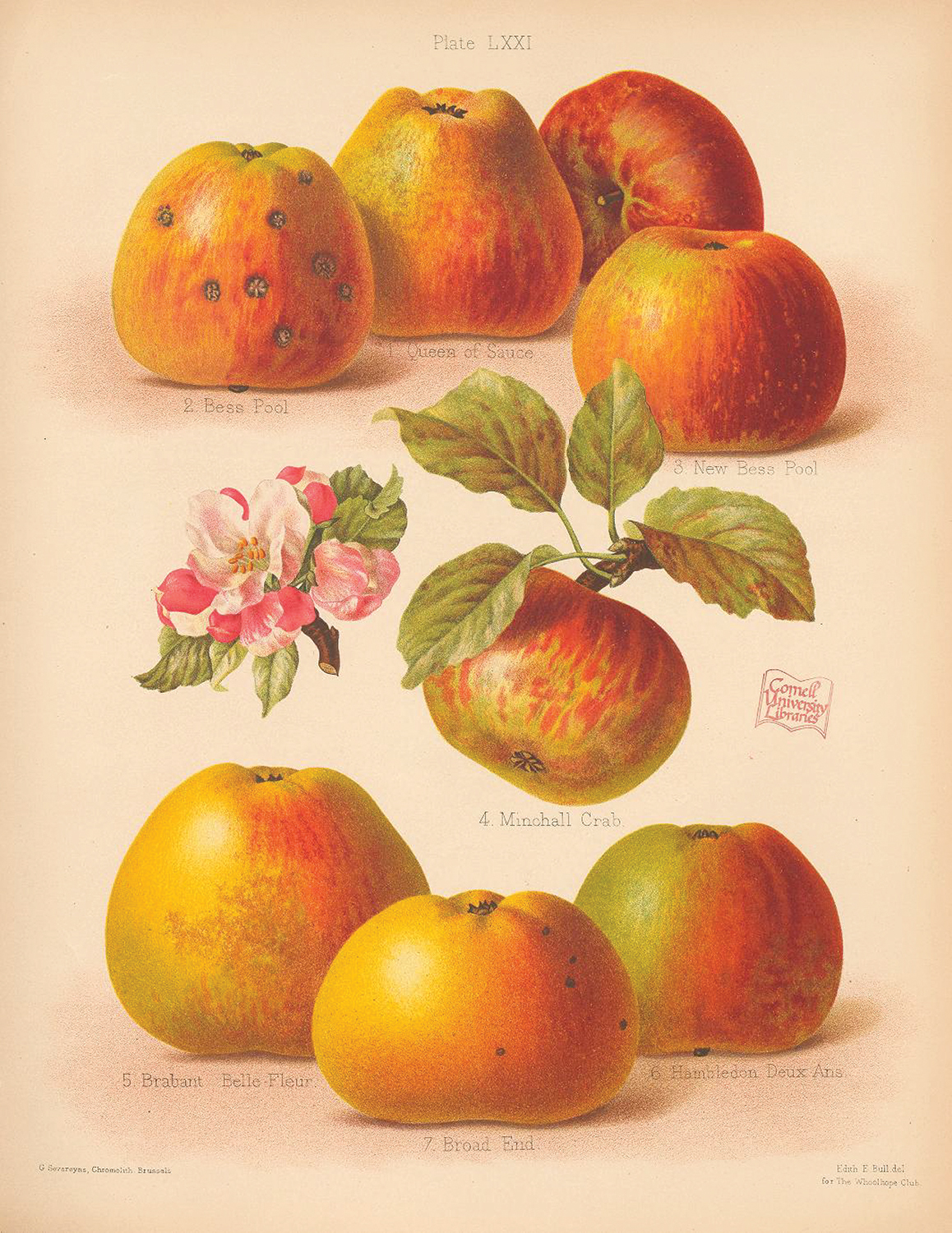 It is a glimpse into a lush diversity of the past….and into possibilities for a resilient future. The Herefordshire Pomona is a classic in the science and practice of pomology. Compiled and edited by the eminent 19th century horticulturalist Robert Hogg and the physician Henry Graves Bull, who moonlighted as an enthusiastic amateur naturalist, the Pomona was an outgrowth of efforts by the Woolhope Naturalists’ Field Club to record and showcase the different varieties of apples and pears found in the orchards of Herefordshire, a county in the West Midlands region of England.

For centuries, Herefordshire was known as the center of English apple cider production, a reputation that it continues to enjoy today. And yet, already in the mid-1800s there was growing concern among English horticulturalists and naturalists that many of the region’s orchards were falling into disuse, the fruits of their trees being passed over and forgotten in favor of more popular imports from other parts of the country and world. 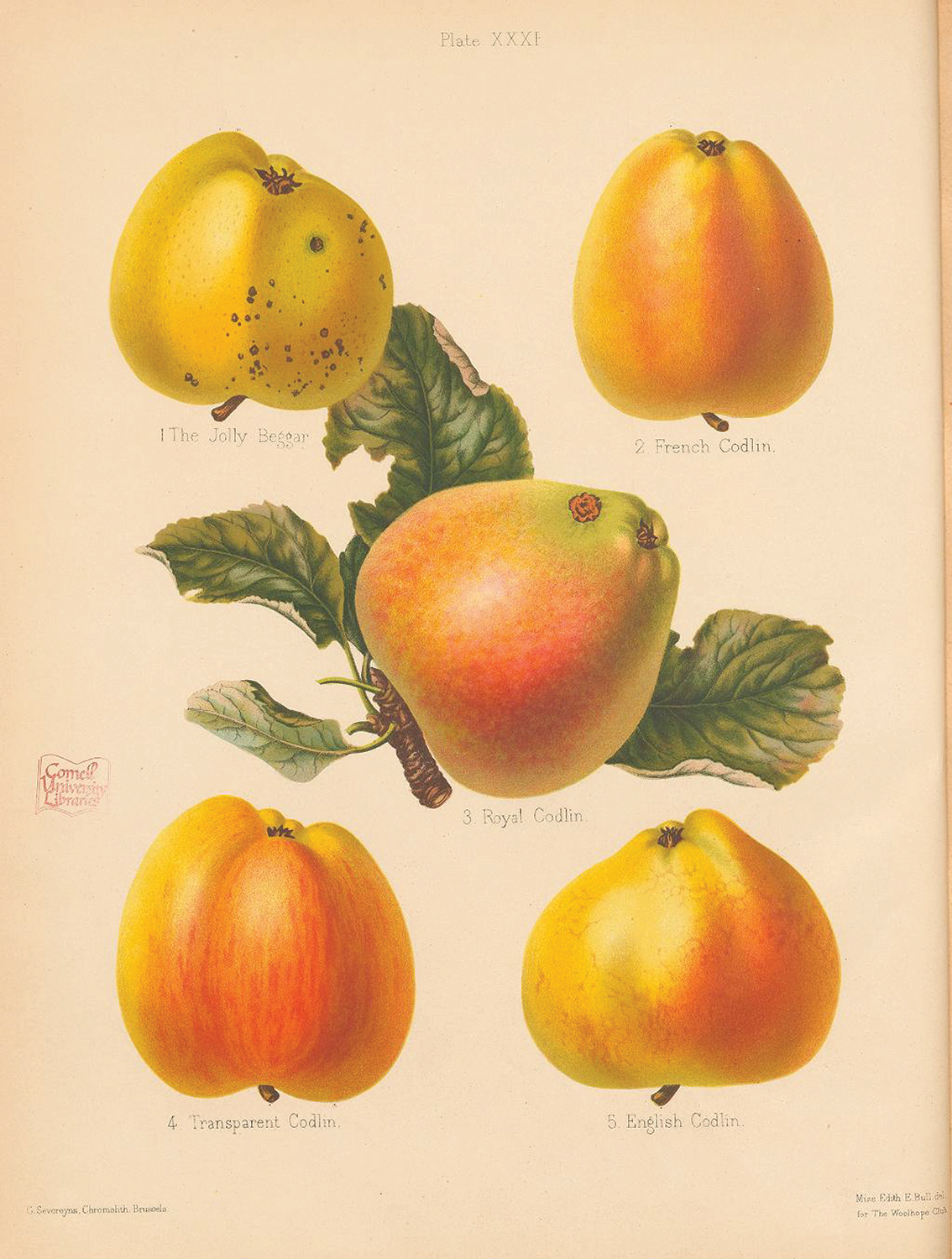 To counter this erosion of agricultural heritage, each year the Woolhope Club staged exhibitions of locally grown apples, inviting renowned experts, including Dr. Hogg, to judge the quality of the featured fruits, and to help identify any fruits not already clearly recognized. To fully capture the insights gained from these explorations, Hogg and Bull enlisted the help of artists Alice Blanche Ellis and Edith Elizabeth Bull (thought to be Dr. Bull’s daughter), who drew their pomological subjects as they saw them— glorious hues, unsightly warts, odd-lot shapes, fluky speckles and all. The resulting work was issued in seven parts between the years 1876 and 1885, purchased on subscription basis by English town and country gentry willing to pay a tidy sum for this comprehensive and gorgeously illustrated work. 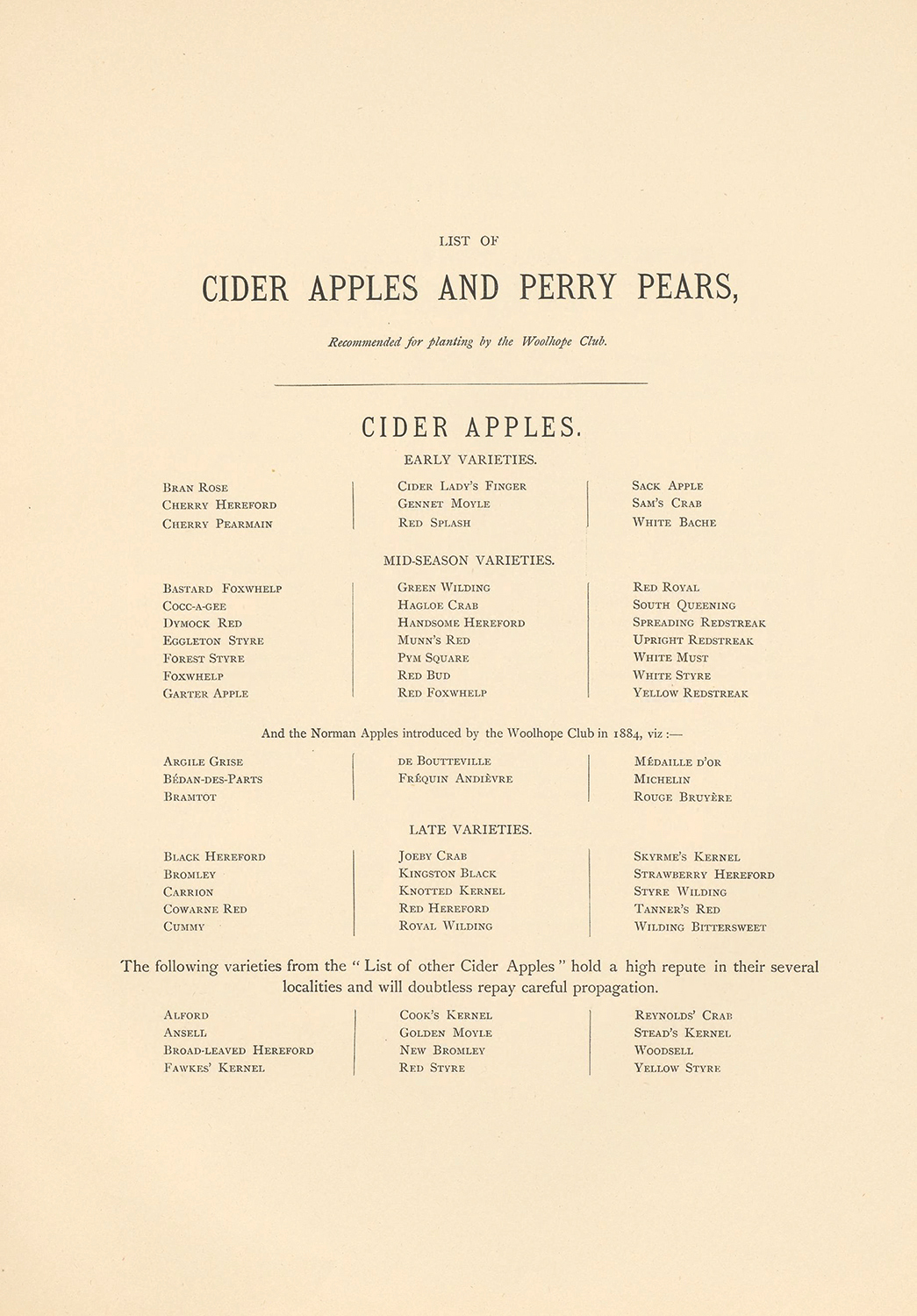 While the Pomona may thus have been born as the ultimate coffee table book for upper class households, it performed an invaluable service by documenting the presence of over 400 apple and pear varieties in 19th century England. Its indexes alone, featuring variety names like Garter Apple, Foxwhelp, Cocc-a-gee, Monstrous Pippin, Jolly Beggar, Bess Pool, Kentish Fill-basket, Peasgood’s Nonesuch, Queen of Sauce, Friar, Gipsy King, Schoolmaster, American Mother, Hoary Morning, and Bastard Rough Coat, read like a playful ode to the hidden stories—from lyrically sweet and archly comic to the darkly dramatic—of old English country life. Descriptions for each variety—drawn from Fruit Manual, a significant earlier work by Hogg—are instructive, not just for information about horticultural best practices of the time, but also for their guidance about important qualities of each variety, such as flavor, optimal timing for harvest, and shelf life in storage. And, as the Pomona notes, when it comes to cider apples, one should not be fooled by the size and the often-bitter taste of their varieties, for the smaller the fruit, the better the beverage. 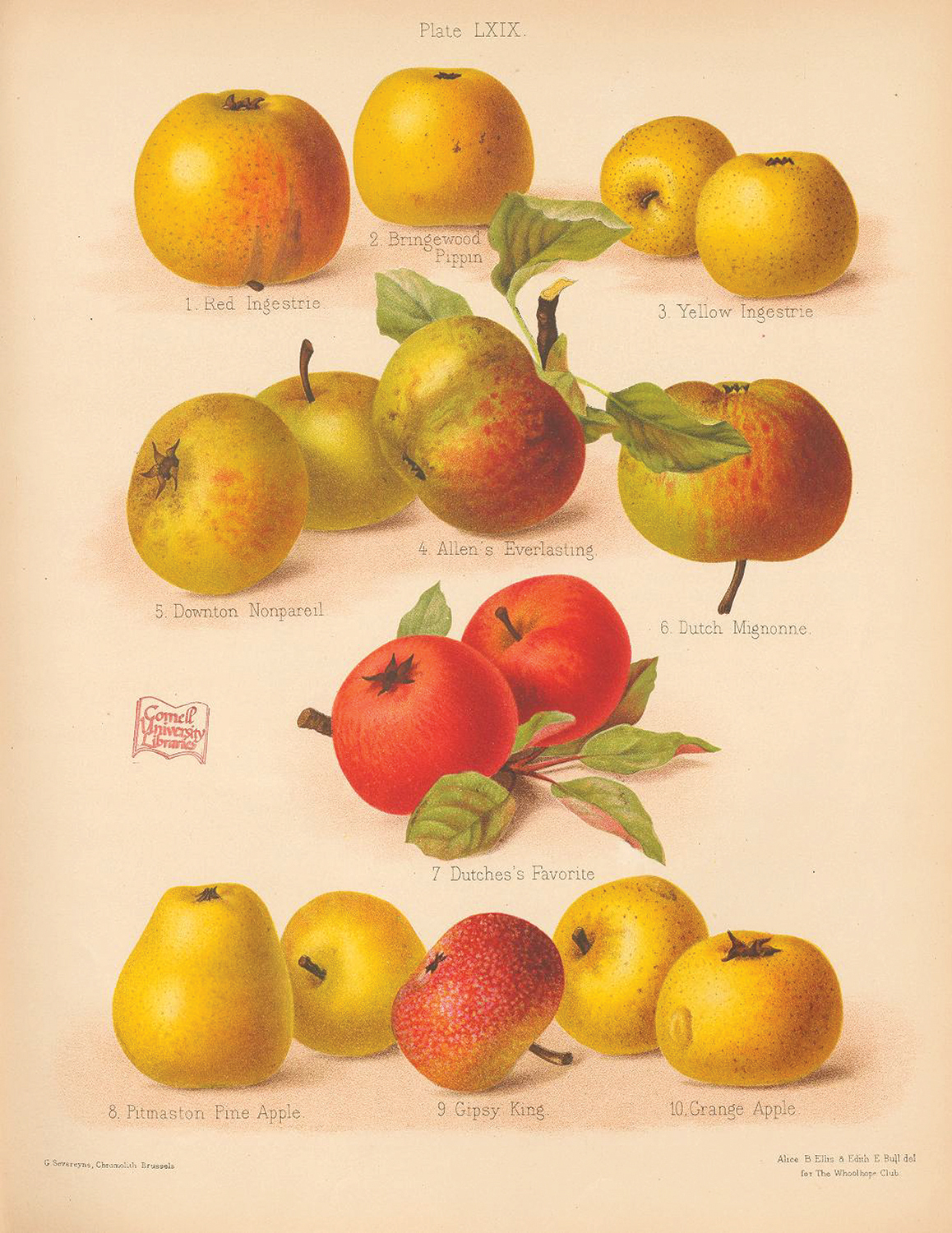 In 1885, six hundred copies of the Herefordshire Pomona’s seven published parts were bound and issued as a two-volume set. Mann Library is fortunate to hold one of these extremely rare sets in the Library’s special collections. Over the past several months, we have digitized both volumes.  Now part of the growing online collection of legacy life sciences literature in the Biodiversity Heritage Library, this digitized copy in the BHL collection makes an invaluable record of English horticultural history widely available to today’s scientists and breeders. As current interest in finding lost cultivars, securing genetic diversity, and developing new varieties with appropriate qualities for a re-emergent cider industry grows, the Herefordshire Pomona will help ensure that insights preserved from our past continue to advance both the discovery and conservation needed for a healthier world tomorrow. 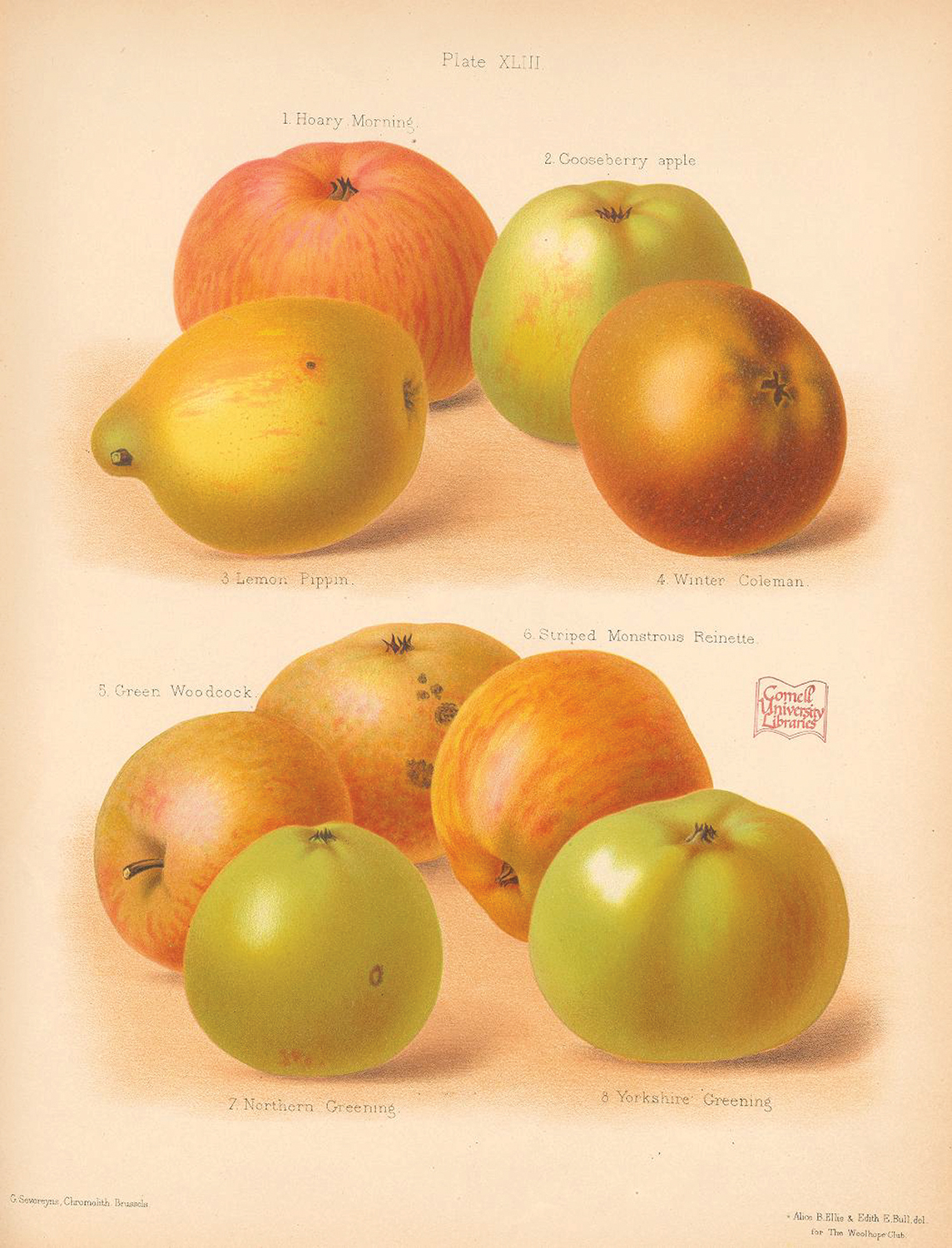 The week of 4 June 2018, BHL is celebrating cider-making and apples with Cornell University Library and Mann Library. Follow #CornellCider on social media for a sweet dose of apple delight and visit the Pomology: Apples and Cider collection on BHL to explore more great books like Herefordshire Pomona.

Roach, F. A., The Cultivated Fruits of Britain: Their Origin and History.  B. Blackwell, 1985

Eveline Ferretti is the Public Programs and Communication Administrator at Albert R. Mann Library, where she has the pleasure of working with a library staff that is passionate about promoting knowledge and discovery in all subjects related to the life science and human ecology disciplines. An enthusiastic (though not always very successful!) gardener, Eveline has a keen interest in issues of agrobiodiversity and sustainable farming, and enjoyed learning a little more about Malus x domestica’s long and fascinating history while writing this post. 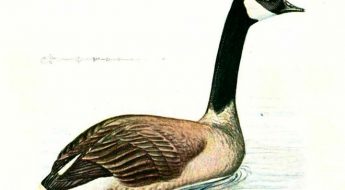 « Previous post
Myrtle: The Provenance and Meaning of a Plant
Next post »
For the Love of Cider: Phenotyping Apples with Modern Techniques and Historic Texts