Book of the Week: Introducing American Flora to England 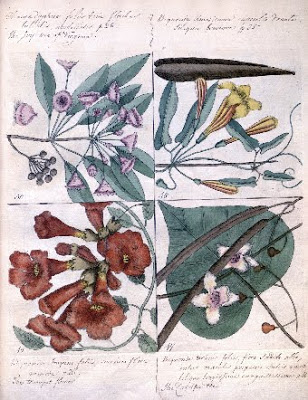 When settlers first came to the Americas from England and other parts of Europe, they were chiefly concerned with survival, as might be expected, and, though they may have taken note of the new and beautiful varieties of flora and fauna to be found in the wild new expanses of the New World, there was little concentration on how these species might be utilized, or even carried back to the homelands of the settlers for the benefit of those across the seas. The author, Mark Catesby, of this week’s book of the week, Hortus Europae Americanus, or A Collection of 85 Curious Trees and Shurbs (1767), expresses disappointment at this fact, and stresses that, particularly due to the similarities of the climates of England and northern America, the flora of the New World should be taken back to the empire and utilized in that country. In his own words,
“It will easily be imagined that a forest of a thousand miles in length, extending twenty degrees in latitude from north to south…must afford a plentiful variety of trees and shrubs, that may be usefully employed to enrich and adorn our woods by their valuable timber and delightful shade; or to embellish and perfume our gardens with the elegance of their appearance and the fragrancy of their odours…But however obvious this may now be, very little regard was had thereto at our first settling of those countries; nor indeed was any considerable step taken towards introducing these strangers into England till about the year 1720.”
In hopes that more people might take advantage of the trees and shrubs to be found in America, and cultivate them in their own gardens in England, the author, in this work, is “particular in giving an account where the several kinds of plants are to be found that are uncommon, and in directing how they should be collected, packed up, and secured, so as to preserve them in good condition during their passage.” Thus, in this work, the author describes eighty-five trees and shrubs of the Americas, “sixty-three of which are graved, and their figures here exhibited; the remaining twenty-two are described, but not graved, which is thought altogether unnecessary, because their description alone gives a clear idea of them without any other assistance.” The author also gives detailed instructions on how to care for and manage these species.
For example, to begin the book, the author describes the Laurel-tree of Carolina, which, “Of all the trees able to endure our climate, that have yet been introduced to England, there is none that can equal this magnificent ever-green.” Instructions for packing and shipping this tree off to England proceed as follows,
“The cones or seed-vessels should be plucked from the tree in the month of September, when the seeds manifest their beginning to ripen by bursting forth from the little cells wherein they are contained. After the cones have lain by for a little while, the seeds may be taken out and sent to England as soon as opportunity offers,” after which instructions are given on how to pack the seeds for the voyage, and what steps should be taken to cultivate the seeds once they arrive in England.
The rest of the work is filled with further instructions on how to grow these beautiful specimens outside of their natural habitat. Furthermore, the book contains lovely illustrations depicting many of the species for which growing instructions are given. Take a moment to find out how early settlers worked to spread the beauty of the New World across the seas, for all to experience. And enjoy the meticulous illustrations that depict just how beautiful these specimens really are.
This week’s book of the week, Hortus Europae Americanus, or, A Collection of 85 Curious Trees and Shrubs (1767), by Mark Catesby, was contributed by the Missouri Botanical Garden.
book of the week; America; plants; shrubs; trees
February 15, 2011
Share This Post

« Previous post
Sparking Conversations with Our Users: You Talk and We Listen
Next post »
BHL and our Users: Patrick Ives LaFollette