All posts from November 2012 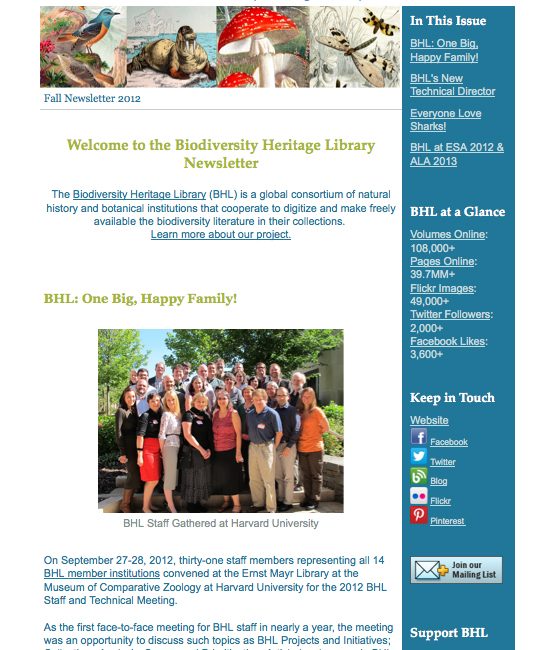 Want to keep up with all the latest BHL project updates? Then subscribe to our quarterly newsletter! It’s full of great information about all the fun things BHL is doing. The Fall 2012 Newsletter (excerpt below) highlights the 2012 BHL Staff and Technical Meeting; our new Technical Director, William Ulate, and the formation of the Technical Advisory Group; BHL’s Shark Week campaign; and BHL at ESA 2012 and ALA Midwinter 2013.Click here to subscribe to the BHL Newsletter. 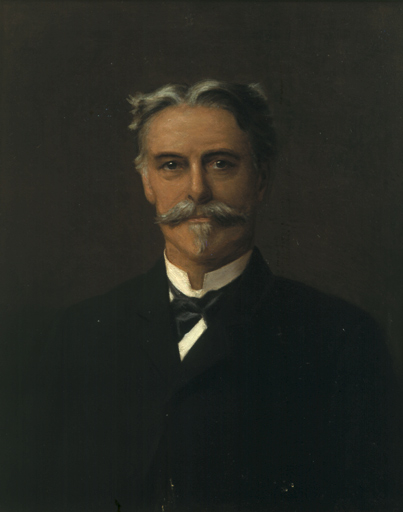 The Catesby Tercentennial Celebration The blogosphere is abuzz with tributes and commendations for famed artist Mark Catesby. Why? We are in the midst of celebrating the three hundred year anniversary of Mr. Catesby’s journey to America. Like so many well-known naturalists, Catesby was an intrepid young man with an insatiable curiosity for Nature’s Kingdom. He was particularly entranced with new, unknown, and exotic species and it was precisely for this reason that he was so determined to make his way across the Atlantic and be the very first man to observe, catalog, and illustrate the teeming plant and animal life from the New World. Though he lacked a formal scientific background, the monetary means, the artistic skill and the knowledge of engraving necessary to produce a natural history pictorial book covering the species of North America, he was not deterred from his dream to complete just such a tome. So one might easily guess what this week’s book of the week is. Our selection this week represents Mark Catesby’s life work: The Natural History of the Carolina, Florida and Bahama Islands. In 1747, Catesby happily finished his book. It took two trips to America and almost 20 years of effort to be completed but, Catesby died a happy and accomplished man just two years later, in 1749. Appreciating Catesby Like a fish out of water? Over the course of those twenty years, with much patience and persistence, Catesby gathered the money, the skills and the scientific knowledge necessary to achieve his goal. He made use of the libraries of wealthy scientifically minded men from London’s Royal Society, studied the work of some of the best natural history artists at the time (notably Georg Ehret, George Edwards and Maria Sibylla Merian), learned to engrave plates himself to curtail the costs of producing his publication and gathered funding from generous patrons who were interested in having specimens sent back to them from America. He was a determined do-it-yourself (DIY) kind of man. It would take Catesby the better half of his life to accomplish what he had initially set out to do but, he had a dream that he was insistent on making a reality. The fruition of his efforts was truly monumental at the time. When his work was presented to the Royal Society in London, Secretary Cromwell Mortimer remarked that it is “the most magnificent work I know since the Art of printing has been discovered.” Not a bad review for a quiet man who was in the habit of disparaging his own talents: “I was not bred a painter and I hope some faults in perspective and other niceties may [therefore] be more readily excused.” ~Mark Catesby. Mr. Catesby, you are most definitely excused. The feigned modesty is not necessary. While some have said that Catesby’s flat style is less realistic, that his whimsical juxtaposition of plants and animals are environmentally inaccurate and that his illustrations are sometimes downright bizarre, we think it’s for these very reasons that we find Catesby’s work so intriguing, refreshing, and moving. Coinciding serendipitously with Catesby’s Tercentennial celebrations has been the final completion, after months of anticipation, of the digitization of the Smithsonian’s very special first edition copy of Catesby’s The Natural History of the Carolina, Florida and Bahama Islands. This particular copy is considered a “perfect copy” and belonged to none other than Secretary Mortimer himself. Let’s repeat that. Yes. It’s free. It’s online. It’s available. Where? On the BHL of course. Catesby went beyond documenting and illustrating North America’s species as he sought to ignite our imagination with his peculiar and unique perception of the natural world. Today, we are re-introducing Mark Catesby’s magnum opus in digital form, so that it can be enjoyed by everyone as we think Catesby would have wanted. 8 things to look for when examining Cromwell Mortimer’s copy Want to know what you should be looking for in this week’s book of the week? Leslie Overstreet, Curator of Natural History Rare books and Head of the Smithsonian’s Joseph F. Cullman Library, gives us expert tips on what readers should notice when examining this prized book held in the rare book vault at the National Museum of Natural History. Cromwell’s Arms 1) Cromwell’s Coat of Arms How do we know that this particular copy was originally owned by Secretary Cromwell Mortimer of the Royal Society? Expert on British Armorial Bindings, Philip Oldfield of the University of Toronto has verified that the covers have been stamped in gold with the arms of Secretary Mortimer. Mortimer is listed in the book as an original subscriber of Catesby’s work.   Click to enlarge the Proposal 2) Catesby’s Proposal It was in Catesby’s Proposal to the Royal Society of London, that he first announced his plans for his work and outlined the parts to be published and subscription costs. Subscriptions would be issued quarterly, containing twenty plates a piece. Subscribers had the option to purchase black and white plates at one guinea per part or color plates at two guineas per part.     3) The overall arrangement of the work The book includes 220 plates, illustrating 109 birds, 33 amphibians and reptiles, 46 fishes, 31 insects, nine quadrupeds, and 171 plants. The high cost of producing such a work in the 1700’s meant that Catesby would publish it in installments. Therefore, the work was originally issued in 11 parts, each including 20 plates. Volume One was issued in parts one through five, between 1729-1732; Volume Two was issued in parts six through ten, between 1734-1743; and lastly the Appendix and the final part 11 were issued in 1747. 4) The evolution of the work Under the tutelage of talented artist Georg Ehret, Catesby learned a more three dimensional and rotund style that gave a life-like feel to his drawings. Take a close look. Do you see how Catesby’s artistic abilities evolved? Which picture do you think came later? Flat or Rotund? You be the judge 5) Catesby’s Binders Notes The copy […]

William Ulate, BHL Technical Director and I are pleased to announce the creation of the BHL Technical Advisory Group (BHL TAG). The BHL TAG will work with William and the Technical Development team at the Missouri Botanical Garden (Mike Lichtenberg and Trish Rose-Sandler) in an advisory capacity.

Internet Archive scanning: Behind the scenes at the Biodiversity Heritage Library 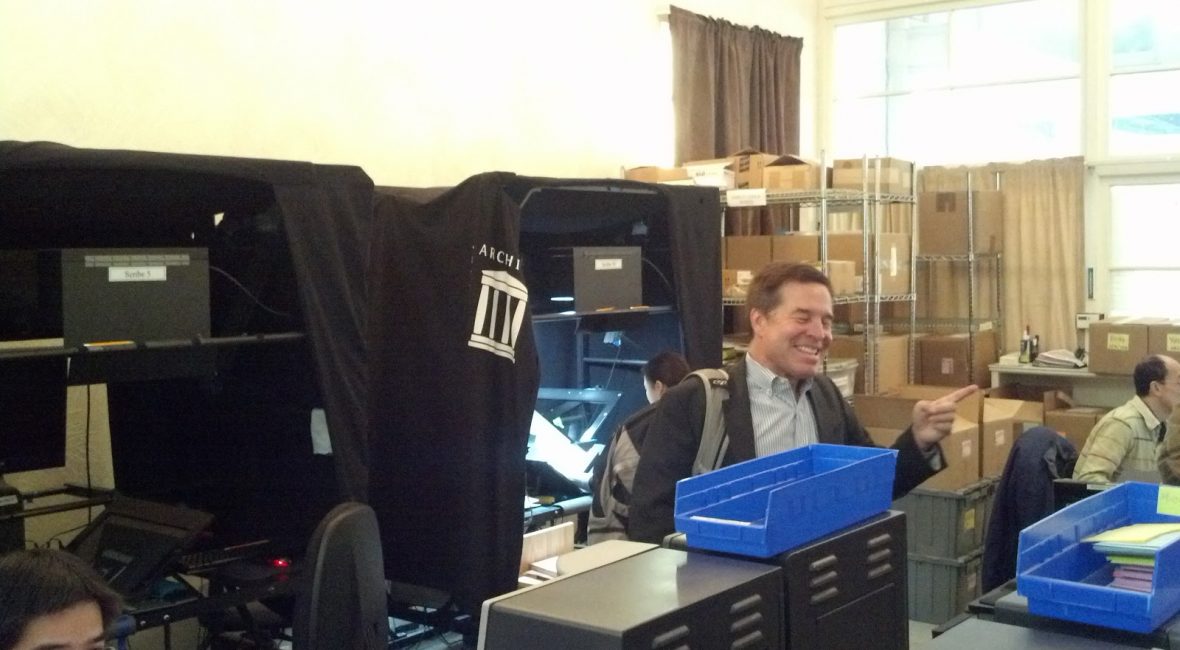 These days with digital cameras built into your phone, most everyone has some first hand experience creating digital images. Creating the nearly 40 million page images on BHL is in many ways similar what you probably do on a daily basis with your phone – it’s really just a matter of scale in terms of the technology used for the digitization and the special care taken with the books.

BHL, Internet Archive, and the eBook 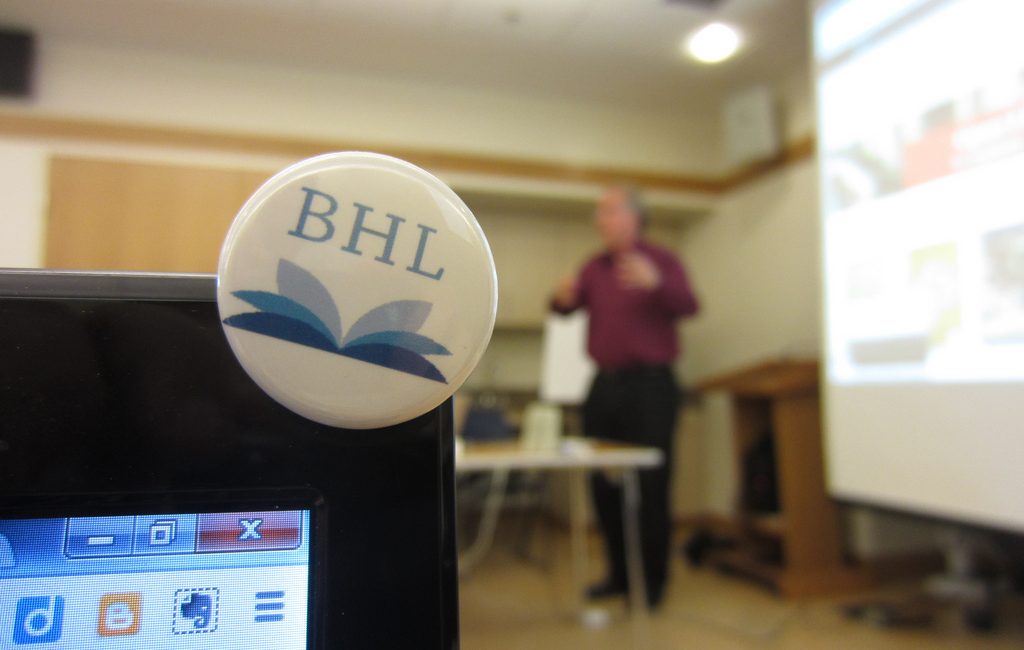