Within South America’s coastal ecosystems, vast expanses of subtropical and temperate salt marshes are dominated by an iconic species, the smooth salt marsh cordgrass Spartina alterniflora. This species is an important ecological engineer, providing habitats for a wide range of species and shaping the environmental evolution of many coastal ecosystems worldwide.

S. alterniflora is considered native to a wide latitude of the Atlantic coastline from Canada to Argentina, and the Patagonian salt marshes that it dominates are deemed pristine native ecosystems.

However, according to Dr. Alejandro Bortolus, a coastal ecologist, Head of the Grupo de Ecología en Ambientes Costeros at IPEEC-CONICET, and Co-Chair of the X International Conference on Marine Bioinvasions, this is an ecological mirage.

“Although wild and overwhelmingly beautiful, Patagonia is anything but pristine,” asserts Bortolus. “However, the general public and international scientific communities have largely embraced this mythic image of an untouched remote region in the uttermost ends of the Earth. They have come to believe in what I call ‘ecological mirage.’”

For more than a decade, Bortolus and his colleagues have been examining historic records and accounts from early settlers and naturalists, leading to the conclusion that S. alterniflora was actually introduced to South America in the 18th or early 19th century as a result of human activity, transforming what were once intertidal mudflats into the salt marshes seen today.

Bortolus describes this transformation within the Ecological Mirage Hypothesis.

“The Ecological Mirage Hypothesis proposes that a long overlooked historical event — where an exotic species is introduced to a given region but then mis-interpreted for centuries as native — may cause unexpected radical shifts in the evolution of the affected ecosystems,” explains Bortolus. “Under such circumstances, even those landscapes deeply associated with the culture and history of a region might not be as pristine as we were led to believe.”

Of course, proposing that these iconic, “pristine” salt marshes are in fact dominated by an introduced bioengineer species has widespread implications. Bortolus and his colleagues, James Carlton and Evangelina Schwindt, needed extensive evidence to support their theory.

The Biodiversity Heritage Library proved to be an invaluable resource for obtaining this evidence, providing easy access to essential rare literature and historic records.

“The review in which the Ecological Mirage Hypothesis was proposed (Bortolus et al. 2015) took nearly a decade to complete,” explains Bortolus. “BHL helped to speed up the work considerably by supplying us with high-quality material impossible to obtain from other sources, including rare first editions, old newspapers, reports, and church accounts, settlers’ diaries, interviews, and personal letters, etc. All of the material is available for anyone to check, double-check and check again from any personal computer in what I consider a portable magical library.”

Bortolus has been studying coastal ecology for over thirty years. His doctoral project involved the first manipulative experiments explicitly focused on the plant-animal interactions shaping the salt marshes of southern South America, including the first experimental evidence recording that herbivore crabs can significantly affect Spartina plants’ production and reproduction. Over his career, he also provided the first comparative description of the Patagonian salt marshes, including the “rocky salt marshes” – a unique intertidal hard-bottom ecosystem dominated and characterized by Spartina species. His projects also cover the problems caused by the deficient use of Taxonomy in ecological studies (the “Eco-Taxo Interface”).

BHL has been supporting Bortolus’ work since he first discovered it around 2007 after a routine Internet keyword search led him to the Library.

“I was astonished by the fact that BHL could provide me not only with classic records two or three centuries old, but also with publications written by Argentina’s pioneers of Botany, some of which I was struggling to find in the libraries of my own country,” lauds Bortolus. “In a matter of seconds, meticulously scanned publications supplied by some of the largest scientific institutions worldwide were there for me to use…and for free!”

Today, Bortolus uses BHL regularly as part of his research process. The Library has significantly improved the efficiency of his work.

“Before I discovered BHL, I was sending paper cards through the regular international mail to request the literature I needed – a process that normally took between 6 and 9 months for me to get the material (if I succeeded at all),” recalls Bortolus. “BHL is an excellent, unique initiative that creates a virtuous circle in which scientific knowledge is available to those who need it the most, helping them to produce more knowledge and bridging geographic and cultural frontiers as if they don’t exist.”

The information Bortolus has gleaned from BHL not only provides a new understanding of the forces that shaped South America’s coastal ecosystems over the last centuries, but also underscores the importance of historical documents when designing conservation strategies to protect “native” species. “Natural” is not always what it seems.

“Historical records make one realize that even the most significant scientific findings can fade away, independently of how revealing they are,” explains Bortolus. “I feel that finding and bringing back those forgotten discoveries and ideas to analyze and re-discuss them is one of my highest responsibilities as a scientist. For anyone trying to achieve that goal, BHL is a dream come true.”

Learn more about the X International Conference on Marine Bioinvasions, which will be held in Puerto Madryn from 16-18 October 2018, here: http://www.marinebioinvasions.info. 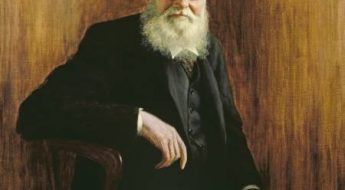