From Billions to None: The Story of the Passenger Pigeon

Ohio, 1854. A dense, black shadow begins to creep across the northern edges of the horizon, slowly but incessantly blotting out a bright cerulean sky. Residents take notice, and pour out of their homes and businesses to stare in wide-eyed awe and trepidation at the phenomena edging towards them.

Hours pass, and the sky is hurled into unwavering darkness. Finally, as the day fades, the sun itself succumbs to this nameless power.

Men and women fall to their knees in prayer, begging for deliverance from the Revelational apocalypse. A thundering roar, like the beating of a million drums, assaults the kneeling petitioners, and their fingers turn icy as an arctic gale whips around their bodies.

A lone figure, hunting rifle in hand, stands atop a hill and stares at the pitiful scene before him. Shaking his head, he lifts his muzzle, peers straight and true through his sights, and pulls the trigger. Dozens of shapes, like tiny meteors, break away from the mass overhead and plummet towards the earth. Swinging his weapon over his shoulder in satisfaction, he picks up a burlap sack and swaggers towards the fallen celestial bodies. As he stoops and retrieves one of the mysterious figures, a pair of slate wings unfurls. He stuffs the Passenger Pigeon unceremoniously into his bag and moves on to the next bird.

Ohio, July 1914. A ten year old boy sidles through a mob of men, women, and children ogling exotic animals at the Cincinnati Zoological Garden. Desperate to find a quite haven to escape the crowd, the child slips around the corner and finds himself staring directly into a pair of bulging eyes. Startled, he jumps back, and the eyes tilt sideways in response, as though curious about this new creature.

Brow furrowed, the boy takes a timid step forward, mesmerized. What he had momentarily mistaken for the glare of some ferocious predator he realizes is simply the quizzical stare of a rather drab looking bird. Her feathers, ever so slightly ruffled, are an unimposing brown dotted with gray and black. She stands with her back to him, her head facing him atop a neck turned 180 degrees like a broken porcelain doll.

“So I see you found Martha,” a deep voice rumbles behind him.

Startled again, the boy turns and finds a gray-haired, mustached zoo keeper standing behind him.

“Martha, our passenger pigeon. She’s the last of her kind, you know. When she dies, a whole species will go extinct.”

Frowning, the boy turns again to look with new appreciation into the eyes of this modest animal. Unexpectedly, he is filled with sorrow. She may not be as exciting as a dinosaur or as fierce as a saber-tooth tiger, but she looks very innocent and very lonely.

A surge of purpose rises up in his chest.

“Can’t we do anything to help her?” he asks fervently.

The man shakes his head sadly.

“It’s too late. Maybe we could’ve done something forty years ago, when people first realized they were in trouble. But now, there’s nothing we can do.”

The boy turns back despondently. She was the very last of her species, and it was too late to do anything to save her. Why hadn’t anyone done something when there was still time?

Losing interest in the boy, Martha turns her head, puffs up her chest, and tucks her beak tightly into her breast. She’d had enough of humans for one day.

The Fall of a Mighty Empire: The Passenger Pigeon

Two hundred years ago, the Passenger Pigeon (Ectopistes migratorius) was the most abundant bird species in North America. A population numbering in the billions, as much as 40% of all land birds on the continent shared the same genome as Martha. Migrating flocks were so large that they literally blocked out the sky, stretching up to a mile wide and 300 miles long and taking 14 hours to pass a single point. Flocks were so densely packed that a single shot could bring down dozens of birds. The beat of up to 3.5 billion pairs of wings literally created its own cold front below, and those unaccustomed to the marvel feared the end of the world was upon them.

Nesting colonies were just as large, covering several hundred square miles of forest. A single tree often contained up to 100 nests, causing many to topple over at the sheer weight of an aviary kingdom. By the end of the nesting season, blankets of pigeon droppings several inches thick saturated the forest floors. However, while colonies were staggeringly massive, a mating pair of passenger pigeons produced only one, occasionally two, eggs per season.

The Passenger Pigeon was nearly twice as large as the common city pigeon, with males averaging 16 inches in length and up to 12 ounces in weight. Frames built for speed and maneuverability, the birds could reach up to 60 mph, making them ideal targets for not only hunting parties but simple target practice. The onset of large-scale commercial hunting and railroads for distribution turned a sustainable hunting practice into a frenzied genocide. In 1869, Van Buren County, Michigan, alone shipped 7.5 million passenger pigeons to the east, where they sold for mere pennies.

The dangerous decline of the species was noted as early as the 1850s, but cheap meat and a seemingly endless supply of birds dampened any resolve to implement hunting restrictions. In 1896, a majority of the last wild flock of 250,000 birds were killed during a sporting event heralded as the “last chance to shoot the passenger pigeon in the wild.” On March 24, 1900, a 14-year old boy killed the last known wild Passenger Pigeon in Pike County, Ohio.

From billions to none in less than 100 years.

Martha the Passenger Pigeon is perhaps one of the most famous animals in the world, for she is a tangible reminder of the human capacity to decimate biodiversity. At nearly 30 years old, Martha, the very last of her species, died at the Cincinnati Zoological Garden at about 1pm on September 1, 1914. Immediately after her death, she was entombed in a 300 pound block of ice and shipped to the Smithsonian, where she was taxidermied.

In remembrance of the centennial of her death, Martha is on display at the Smithsonian’s National Museum of Natural History until October, 2015, as part of  the joint BHL/Smithsonian Libraries exhibit: “Once There Were Billions.” The exhibit documents the tragic histories of four extinct North American birds: the Passenger Pigeon, Great Auk, Heath Hen, and Carolina Parakeet.

Millions of people have rallied to commemorate the Passenger Pigeon this year, and help raise awareness about endangered species, extinction, and the impact of human activity on healthy ecosystems. The “Fold the Flock” initiative is an effort to recreate the staggering passenger pigeon flocks of the 19th century through origami pigeons. “The Lost Bird Project” has created a film and book to investigate extinction and memory. Also as part of the project, Todd McGrain has crafted stunning bronze sculptures of extinct birds, including the passenger pigeon, which are on display across America.

Other initiatives like Project Passenger Pigeon, the film From Billions to None, and a multitude of exhibits nationwide are working to raise awareness about extinctions and excite action to prevent future biodiversity calamities.

Finally, as always, BHL is here to help! Find books about the Passenger Pigeon and illustrations of the species for free from BHL.

How Can Historic Literature Help Modern Scientists Save Species?

Reports, illustrations, and photographs in historic literature and taxidermied specimens are the only remaining record we have of extinct species. Thus, preserving this knowledge is important simply as a means of documenting the biodiversity we have lost. But retaining and providing access to this legacy literature is not just about creating a memorial for extinct species. It’s also about helping to prevent future extinctions.

Historical records allow scientists to study the morphology, behaviors, habitats, diet, and breeding patterns of species, which help determine where those species might be vulnerable and inform strategies for rehabilitating endangered populations. Similar information about extinct species, and an evaluation of the circumstances that led to their demise, can help scientists identify threats to similar species. Records of migration pathways and changes in distribution patterns allow scientists to provide educated recommendations to policy makers about the lands and species to protect.

Without a concrete evaluation of earth’s biodiversity history, and an understanding of the mistakes we have made in the past, we are doomed to repeat our darkest moments. But just as humans have a capacity to annihilate a species, so have we the power to save one (take the American Wolf, for example). Supporting initiatives like the Biodiversity Heritage Library gives scientists, policy makers, and concerned citizens the information they need to protect life on earth. Take a look at what your donation can do, and we hope you’ll consider giving a tax-deductible gift today. 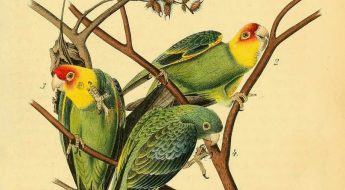