In 1860, Charles Darwin had an epiphany.

This was not an epiphany on the origin of species, as his monumental publication on the subject had been published one year earlier in 1859. This epiphany, which Darwin shared in a letter to his friend Joseph Dalton Hooker, was that flowers in the genus Primula display two distinct forms which differ in the length of the pistil’s styles and the height of the stamen’s anthers.

The condition of having multiple, distinct floral forms within a species is called heterostyly. Darwin coined the term distyly to describe the presence of two forms, or morphs. These morphs are called pin and thrum flowers, with pin flowers possessing long styles and low anthers and thrum flowers possessing short styles and high anthers. Each individual plant contains only flowers of the same morph, and the presence of heterostyly promotes insect-mediated out-crossing. In addition, a self incompatibility system is associated with heterostyly, which inhibits self-pollination. This ensures higher genetic diversity in future generations.

Darwin articulated his ideas on heterostyly within the paper ‘On the two forms, or dimorphic condition, in species of Primula, and on their remarkable sexual relations,’ which he read at the Linnean Society on 21 November 1861 and published a year later in the Journal of the Proceedings of the Linnean Society, Botany.

Darwin published further research on heterostyly fifteen years later within the monograph Different Forms of Flowers on Plants of the Same Species (1877). Within this work, he cites earlier observations of the condition in Primula species. It was not until Darwin, however, that the reproductive significance of these morphs was understood.

Dr. Philip M. Gilmartin has been interested in Primula floral morphs for decades.

A Professor of Plant Molecular Genetics at the University of East Anglia, Gilmartin has been studying gene expression and plant development for thirty years. For the past twenty years, his lab has been focused on understanding the molecular basis of heterostyly in Primula.

Gilmartin’s interest in Primula heterostyly isn’t restricted to genetics. While examining a print of Primula vulgaris from William Curtis’ Flora Londinensis (1777-98), Gilmartin realized that the copper-plate engraving clearly depicted both pin and thrum flower morphs. This realization sparked an exploration into historical observations of heterostyly.

“I sought to track down original references to identify the earliest observations on heterostyly. The Biodiversity Heritage Library resources were invaluable in this study,” affirms Gilmartin.

To conduct his historical review, Gilmartin referred to the cited sources in Darwin’s Different Forms of Flowers, as well as botanical images in early herbals, floral books, and florilegia. He accessed BHL several times each week while tracking down these references, using the scientific name finding tool and thumbnail view in the book reader to identify and navigate to relevant pages. He also downloaded whole PDFs and select pages of relevant material for future reference.

“For one reference cited in Darwin’s Different Forms of Flowers on Plants of the Same Species, the author (Kerner) and journal (Osterreichische Botanische Zeitshcrift) did not match the cited date (1835),” recalls Gilmartin. “I was eventually able to uncover the correct journal article from 1875 to find Darwin’s intended reference. Online access to the scanned journals was invaluable.”

As a result of this research, Gilmartin uncovered other 19th century illustrated representations of heterostyly in Flore Medicale (1818) and Hand-Atlas sämmtlicher medizinisch-pharmaceutischer Gewächse (1848), in addition to the 18th century Curtis image. Additionally, the earliest printed usage of the terms “pin-eyed” and “thrum-eyed” that Gilmartin was able to identify during his research appeared in Curtis’ Flora Londinensis.

The earliest published description of heterostyly, however, occurred much earlier, within Carolus Clusius’ Rariorum Aliquot Stirpium (1583). Gilmartin discovered this reference after consulting a 1943 French paper by van Dijk on historical observations of floral heteromorphy.

“Although Clusius was describing the two forms of flowers in different Primula varieties rather than within the same variety, this is the earliest description to my knowledge of the two forms of pin and thrum flowers which Darwin later studied,” explains Gilmartin.

Gilmartin presented the results of his historical review within the article “On the Origins of Observations of Heterostyly in Primula“, publishing in New Phytologist in 2015. Thanks to the Biodiversity Heritage Library, which is acknowledged in the paper, Gilmartin not only traced the published record of heterostyly but also gained historical context for his genetic research.

As for Darwin’s epiphany, while he was not the first to observe heterostyly, he was the first to study and articulate the reproductive significance of Primula floral morphs. It was an achievement that Darwin took great personal pride in. As he revealed in his autobiography:

“No little discovery of mine ever gave me so much pleasure as making out the meaning of heterostyled flowers.” 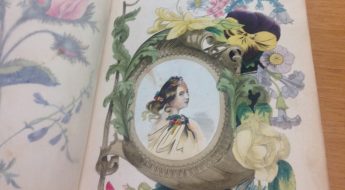