The Chesapeake Bay Foundation has spent the past fifty years working on a complex ecological problem. The Chesapeake Bay is an estuary in Maryland, Delaware, D.C. and Virginia. While about half of its water comes from the Atlantic Ocean, the rest flows to the bay from 64,000 square miles of watershed – spanning 6 states and home to over 18 million people. Pollution from sewage, agriculture, and industry (as well as other impacts of human development) have degraded the bay’s water quality, damaging biodiversity as well as human health, economics, and recreation. Chesapeake Bay Foundation (CBF) is a private sector group using many approaches to tackle this regional issue.

Thanks to CBF’s participation in the Expanding Access to Biodiversity Literature project, Annual Reports and Investigative Reports from CBF are now available on BHL. These publications document CBF’s initiatives in environmental science, restoration, education, advocacy and litigation.

CBF has contributed its Annual Reports from 2008-2014 which track the organization’s accomplishments and goals. The Investigative Reports contributed to BHL are:

About the Chesapeake Bay Foundation

CBF has been active in coastal conservation since 1967. With offices in Maryland, Virginia, Pennsylvania and D.C., as well as fifteen field centers, it’s the largest independent conservation organization dedicated to promoting the health of the Chesapeake Bay.

Over the decades, CBF has been instrumental in organizing and sustaining inter-state conservation work. In the 1970s, CBF called for and then provided staff support to a seven-year Environmental Protection Agency (EPA) Chesapeake Bay Study which analyzed the state of the bay and identified contributing problems. In the 1980s, based on the study’s results, CBF participated in negotiations for the first Chesapeake Bay Agreement, a cooperative inter-state commitment to reduce pollution. Today’s goals for bay cleanup are outlined in the Chesapeake Clean Water Blueprint, an interstate agreement that includes fairly-distributed, measurable goals as well as EPA-imposed consequences for failure to comply. CBF scientists evaluate the long-term progress of the Bay’s health by measuring indicators in three key areas: pollution, habitat, and fisheries.

One of CBF’s many current projects has communities ‘recycling’ oyster shells. Restaurants and citizens bring their empty shells to drop-off points, where they are cleaned and then placed in tanks of swimming oyster larvae. The larvae anchor onto the shells and grow into young ‘spat’ oysters. Oyster gardeners place these shells in rivers and the Bay to help rebuild oyster reefs. This helps to restore the oyster population and improve water quality – one of these filter feeders can filter up to 50 gallons of water in a day.

Thanks to the Chesapeake Bay Foundation for sharing their extensive work with us on the Biodiversity Heritage Library! 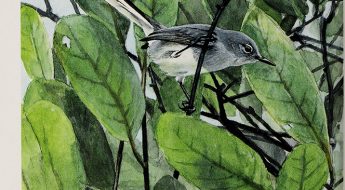