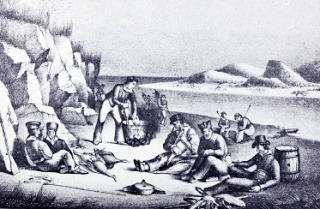 The lure of Antarctica has been captivating humans for hundreds of years, centuries even before the discovery of such a landmass occurred. Discussions about the existence of such a place were proposed as early as the first century AD, when Ptolemy suggested that there must be a giant landmass to the south serving to counterbalance the mass of the giant northern lands (Europe, Asia and North Africa) and preserve symmetry in the world. Following such proclamations, maps constructed as early as the 1500s began portraying a giant continent in the mysterious southern reaches of the globe. However, while belief in the existence of this southern continent permeated antiquity, it was not until the 1800s that confirmation of such a place actually occurred.

The famed Captain James Cook came within seventy-five miles of the illusive landmass in January 1773 before he was forced to abandon the effort in the face of the water’s icy threats to his vessels. Later, remarking upon his failure to sight the fabled continent, Cook wrote,
“The risque one runs in exploring a coast, in these unknown and icy seas, is so very great that no man will ever venture further than I have done.”

Fortunately, for history’s sake, Cook was proven wrong some fifty years later, when the first confirmed sightings of Antarctica occurred. History narrows the first sighting, in 1820, down to three possible candidates: Fabian Gottlieb von Bellingshausen of the Russian Imperial Navy, Edward Bransfield of the Royal Navy, and Nathaniel Palmer, an American sealer. Though somewhat disputed, the first documented landing on Antarctica occurred on February 7, 1821, when the American sealer John Davis set foot on West Antarctica.

Exploration of this great icy land, and conflicting territorial claims, have continued for the nearly two centuries since the confirmed discovery of Antarctica, but many are soon to forget that early extensive interaction with this frozen wasteland cannot be accredited to scientists and the great naval powers of the world, but to sealers who flocked to the “South Shetland Islands,” as they called them, to collect fur seal pelts. This week’s book of the week, The Voyage of the Huron and the Huntress: The American Sealers and the Discovery of the Continent of Antarctica, documents the extraordinary daring of these early seamen, and their contributions to the scientific knowledge since amassed. As the text so eloquently expresses:

“On this fringe of Antarctic seas, [the sealers] established camp and rendezvous, sailing through the ice-filled channels and along the rocky shores of the desolate islands…here they braved the unknown dangers of the icy, uncharted waters to the south, becoming the first among men to sight, recognize and land where rise the snowy mountains of the last great continent – Antarctica.”

This week’s Book of the Week, The Voyage of the Huron and the Huntress: The American Sealers and the Discovery of the Continent of Antarctica (1955), was contributed by the Marine Biological Laboratory, Woods Hole Oceanographic Institution.