Fliegenpilz. Krötenstuhl. Mousseron. Frogge Stole. Paddocstol. Toadstool. What do all of these words have in common? They are all various names that have been applied to mushrooms over the centuries. Today, we’re celebrating these curious, tasty, and sometimes deadly organisms with our book of the week, Nouvel Atlas de Poche des Champignons Comestibles et Vénéneux, (1911-12), v. 1. Fungi never looked as good as it does in the illustrations in this little gem…except, of course, perhaps between two pieces of bread at dinner last night…

The term “mushroom” refers to the “fleshy, spore-bearing fruiting body of a fungus.” “Mushroom” is most often applied to fungi with a stem, cap, and gills or pores, though it can also be more universally applied to fungi of the Phylum Ascomycota, or “Sac Fungi,” which are often woody or leathery in appearance.

The identification of mushrooms is a skill that takes many forms, from traditional methods including odors, tastes, colors, habitats, and seasons of occurrence, to more modern methods involving molecular investigation. A perhaps more interesting technique, however, involves mushroom spores. Mushrooms reproduce via spores, which are produced from basidia in the gills on the underside of a mushroom cap. These spores fall from the cap, and as a result, if the mushroom cap is cut from the stem and placed on a piece of paper overnight, the spores will fall en masse and reveal the mushroom’s spore color. The spore color can help narrow down the genus of the specimen. Such deposits are referred to as “Spore Prints.”

Mushrooms play a large role in the cuisine of cultures all across the globe, particularly in the foods of China, Korea, Europe and Japan. China, in fact, is the world’s leading producer of edible mushrooms. The most popular commercially-grown species is Agaricus bisporus, which includes the well-known Portobello variety. However, despite their popularity as food, there are a number of toxic species, and telling the harmless from the harmful can be difficult as there is no universally-held trait among all poisonous or non-poisonous varieties. Even those species deemed non-poisonous can produce mild to severe allergic reactions in some individuals. As another concern for European varieties, since mushrooms are capable of absorbing heavy materials, many specimens in Europe may still be contaminated from the Chernobyl disaster.

Below are some of our favorite illustrations from our book of the week, “>Nouvel Atlas de Poche des Champignons Comestibles et Vénéneux, (1911-12), v. 1. You can see all of the illustrations from this book on our Flickr site. As a challenge to our readers, one of the species below is poisonous. Which one? 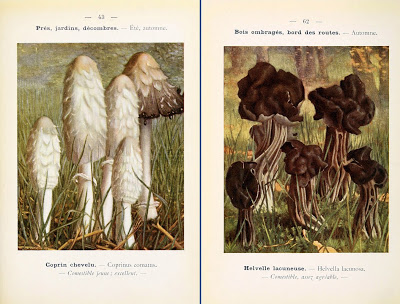 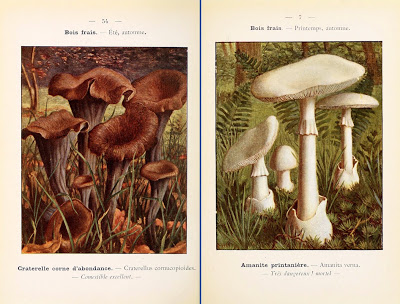 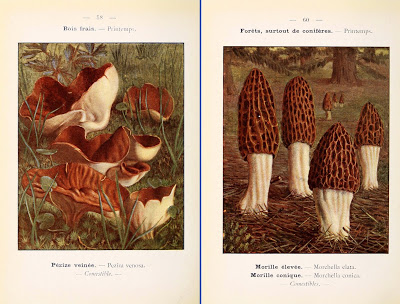 « Previous post
My Life as a BHL Staffer: Gilbert Borrego
Next post »
BHL and Our Users: Aaron Sims