It’s that time of year again, when the ghosts, ghouls, and goblins come out to play, the dead walk, and little children dress up as their favorite monsters and scurry from house to house cramming countless pieces of candy into bulging bags.

BHL has been celebrating Halloween all week with tweets, Facebook posts and quizzes, and a Flickr collection dedicated to the holiday. While doing research for our festivities, we gathered countless myths and legends associated with the biodiversity of Hallow’s Eve. Come along with us as we explore Halloween from nature’s viewpoint, and, thanks to some inspiration provided by Smithsonian.com, find out how you can use BHL to transform yourself into the precise likeness of your favorite species!

Most people associate bats with Halloween because of vampires. Many vampire legends claim that the undead monsters can transform into bats, helping them cover long distances quickly and sneak into the open windows of angelic young girls.

The bat’s original association with Halloween, however, is significantly less ominous. In early times, when the threat of the dead rising from their graves during All Hallow’s Eve was more credited, people would build large bonfires to ward off evil spirits. These fires attracted insects, constituting a small feast for the local bat populations, which would swarm around the fires to catch a midnight snack.

As the association of bats and evil spirits became more imprinted in the minds of credulous civilizations, rumors of bat species from the New World that drank blood only served to further intensify the belief. Unquestionable documentation of the curious species, now known as the vampire bat, by early Spanish explorers sealed the affiliation between bats and evil, and eventually helped give rise to the myths involving vampires (the epitome of blood-sucking monsters) and bats.

Learn about the Bat in BHL with two of our favorite images from our collection: an 1876 illustration from v. 1 of Brehms thierleben, allgemeine kunde des thierreichs and an 1869 illustration from Faune des vertébrés de la Suisse.

The pumpkin’s role in Halloween is tied to the legend of the Jack-o’-Lantern and the Gaelic festival Samhain. Samhain, whose origins date at least to the eighth century, marked the end of the harvest season and the beginning of winter. It was a day when the “door” to the land of the dead opened just enough to let souls and evil spirits escape into ours. While the souls of one’s dead kindred might be welcomed to a feast, precautions were taken to protect oneself from evil spirits that also wandered the earth on that day. One of those precautions involved “guising,” or dressing in costumes to conceal your identity from the spirits (a tradition we still carry out by dressing up in Halloween costumes). Another involved the Jack-o’-Lantern.

In the nineteenth century, the Irish and Scottish carved turnips or potatoes in the likeness of human faces and lit them with interior candles. These lanterns served several purposes: to light the darkness during Samhain festivities; to represent the spirits present during the night; and to ward off evil beings. When Irish settlers came to America, they found that pumpkins, native to the New World and thus foreign to the British Isles, were more prevalent and easier to carve. The carved pumpkin lantern is first associated with Halloween in an excerpt from Daily News on November 1, 1866:

“The old time custom of keeping up Hallowe’en was not forgotten last night by the youngsters of the city. They had their maskings and their merry-makings, and perambulated the streets after dark in a way which was no doubt amusing to themselves. There was a great sacrifice of pumpkins from which to make transparent heads and face, lighted up by the unfailing two inches of tallow candle.”

Learn more about the pumpkin in BHL and enjoy this fantastic 1804 illustration of this squash in Icones plantarum from 1804.

Owls have long been sorcery companions. For example, in ancient England, cooking owl eggs until they were ash, and consuming the ashes, was said to improve eyesight. An ancient Greek and Roman superstition asserts that witches could change into owls and after doing so, would swoop down and drink the blood of innocent babes. It has been claimed that owls are the messengers of witches and their hoot relays the approach of a hag.

Though in many ways adorable, when carefully considered, it is not really surprising that owls find themselves so closely tied to mischief. After all, their horn-like head feathers (eerily reminiscent of the Devil himself), their habit of turning their heads as much as 270 degrees in either direction, and their piercing, unblinking eyes may understandably raise the hair on anyone’s arms.

Over the centuries, the owl has become associated with a variety of dark superstitions. For instance, if you hear an owl screech during the night, take heed of your child, for the screech may either kill it or condemn it to become a witch! Other legends claim that only owls can live with ghosts, and the presence of an owl near a house indicates that it’s haunted. If an owl takes up residence on your roof, death is sure to visit soon!

We think the owl was never more captivatingly pictured than in this 1772 illustration from Verzameling van uitlandsche en zeldzaame vogelen.

Yesterday was National Candy Corn Day! Candy companies sell more than 20 million pounds of candy corn each year! The colors of a candy corn are meant to reflect the orange and yellow of corn kernels. The sugary treat was first crafted by George Renninger in the 1880s at the Wunderlee Candy Company. The confection, made largely of sugar, corn syrup, wax, and artificial coloring, has remained unchanged in over 100 years.

We love this image of Zea mays from v. 3 of Köhler’s Medizinal-Pflanzen in naturgetreuen Abbildungen mit kurz erläuterndem1896-98) that we feature it as one of four designs on our BHL business cards!

You may not have been expecting BHL to have any comment on one of Halloween’s most iconic figures – the witch – but with over 39 million pages, we found a way to make a witch scope-appropriate.

A supernatural figure apparently well-known to nineteenth century sailors, Mother Carey “personif[ied] the cruel and threatening sea,” orchestrating, along with Davy Jones (whom some purport as her husband) shipwrecks and claiming the lives of countless helpless victims. As the petrel species Thalassidroma bullockii and Thalassidroma pelagica are often seen before storms, sailors began branding them as Mother Carey’s minions, bestowing on them the somewhat confusing epithet Mother Carey’s Chickens.

Learn more about BHL’s witch in a past book of the week post.

Megan Gambino of Smithsonian.com posted a great blog piece about drawing ingenuous costume inspiration from BHL. With the anatomically-detailed scientific illustrations found throughout BHL, and easily browse-able thanks to the over 46,000 images in our Flickr account, it’s child’s play to pick a species, say a bat or something more unexpected, like a lobster, and design a guise around the creature.

So, be bold this year. It’s never been easier to have a biodiverse Halloween!

all hallow's eve, bat, corn, costume, halloween, owl, pumpkin, witch
October 31, 2012by
Share This Post
Share on FacebookShare on TwitterShare on PinterestShare on Google+Share on StumbleUpon 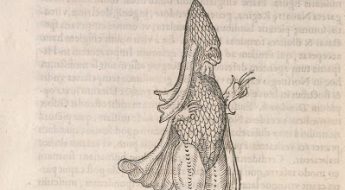 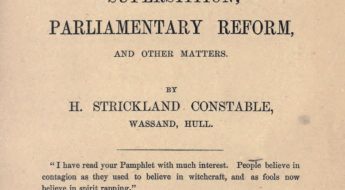 Book of the Week: Halloween, Witches, and Cattle 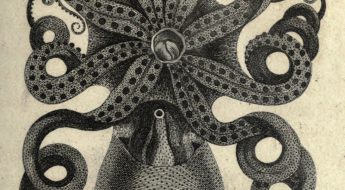