In 1676, the lower part of a massive femur was discovered in the Taynton Limestone Formation of Stonesfield limestone quarry, Oxfordshire. The bone was given to Robert Plot, Professor of Chemistry at the University of Oxford and first curator of the Ashmolean Museum. Plot published a description of it in 1677 in the Natural History of Oxfordshire. The illustration that accompanied the description is the first known published illustration of a dinosaur bone.

Plot first concluded that the bone belonged to a Roman war elephant, but later decided that it must instead represent the thighbone of a giant human like those described in the Bible. In 1763, Richard Brookes used Plot’s illustration of the thigh bone in his six-volume publication A System of Natural History. His reproduction of the illustration includes a caption that reads Scrotum Humanum, referencing the visual similarity between the bone and the human scrotum. Though the name is not considered valid today, its structure, following the Linnaean system of binomial nomenclature, has caused some to argue that it represents the first species name ever applied to an extinct dinosaur, because this thighbone does not, in fact, belong to a giant human, as Plot concluded. It belonged to a dinosaur, probably a Megalosaurus, although, since the specimen has since been lost, it’s impossible to know with certainty which species it belonged to.

Scrotum Humanum notwithstanding , Megalosaurus represents the first dinosaur genus to be described and validly named. In 1824, William Buckland gave the genus the name Megalosaurus in his article “Notice on the Megalosaurus or Great Fossil Lizard of Stonesfield,” describing it as an extinct giant reptile. The lithograph of the Megalosaurus jaw that accompanied the description was based on drawings done by Buckland’s wife, Mary Morland. Later in 1827, Gideon Mantell, in his The Geology of the southeast of England, assigned the type specimen its current valid binomial: Megalosaurus bucklandii.

The carnivorous Megalosaurus, together with the herbivorous Iguanodon and armored Hylaeosaurus, were the three genera later used by Richard Owen to define Dinosauria. 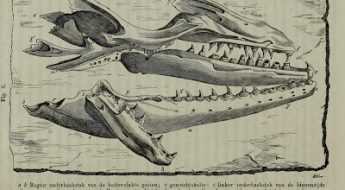