Pterosaurs, flying reptiles that lived 228-66 million years ago, are the earliest vertebrates known to have evolved the capacity for powered flight.

The first known pterosaur specimen was described by Cosimo Alessandro Collini in 1784. Twenty years earlier, in 1764, Collini had been appointed to supervise the Naturalienkabinett at Mannheim, established as part of the Kurpfälzische Academy of Sciences, in present-day Germany. The first-known pterosaur specimen arrived at Mannheim sometime between 1767 and 1784, probably originating from Bovaria. Collini was baffled by the specimen, but deduced that it was not a bird or a bat. He concluded that it must have been some form of marine creature, since he assumed that the ocean depths were more likely than land to house unknown species.

In 1800, Jean Hermann, Professor of Medicine in Strasbourg, drew the legendary paleontologist Georges Cuvier’s attention to the specimen through a letter that included the first restoration of a pterosaur. Hermann interpreted the figure as an intermediate form between birds and mammals and correctly deduced that the long fourth finger was used to support a wing membrane.

Reviewing Collini’s description and conclusions, Cuvier declared that the animal was actually an extinct flying reptile, which he named “Ptero-Dactyle” (Greek for “wing finger”). Cuvier published his findings in a short description in 1801 and then followed it with a longer publication in 1809. In 1818, Lorenz Oken, Professor of Medicine and Natural History at Jena, latinized Cuvier’s name to Pterodactylus.

In 1812, Samuel Thomas von Sömmerring at the Academy of Science of Bavaria published the first binomial for a pterosaur. Working from the Collini specimen, Sömmerring named the creature Ornithocephalus antiquus (now Pterodactylus antiquus), believing it to be a form between mammals and birds (with which Cuvier disagreed. He again described the pterosaur as a reptile in his 1812 publication). Even into the mid-1800s, despite mounting evidence for the reptilian interpretation, many still believed that Pterodactylus antiquus represented other groups. For instance, in 1830, German zoologist Johann Georg Wagler published a paper on amphibians in which he interpreted the pterosaur’s wings as flippers.

Although many additional Pterodactylus species were named over the years, these were found to belong to other genera or to be juvenile forms of P. antiquus, which is now the only valid species within this genus. 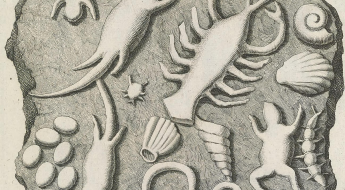