Until the end of the 18th century, it was generally believed that species could not become extinct, and despite important scientific advances in the 16th and 17th centuries, it was widely held that since the dawn of life, no new animal or plant species had been created or lost.

Furthermore, until the 19th century, the word “fossil” referred to any object that had been dug up from the ground, including not only what we recognize today as organic remains, but also gemstones, minerals, and other inorganic materials.

Finally, at the time of the 16th and 17th centuries, when the first books on “fossils” were being published, the living equivalent of many “fossil” species had not yet been discovered, making it extremely difficult to draw connections between fossil specimens and living organisms.

These three scenarios together created a daunting challenge for early naturalists trying to classify and understand fossils, and advances in each were required before true fossils could be widely identified as the remains of past life.

Conrad Gessner is one of the most influential naturalists in scientific history. Born in Zürich, Switzerland in 1516, his five-volume masterpiece Historiae animalium (1551–1558) is considered the beginning of modern zoology.

In 1565, Gessner published a short but incredibly important work entitled De rerum fossilium, lapidum et gemmarum maximè, figuris & similitudinibus liber or “A Book on Fossil Objects, Chiefly Stones and Gems, their Shapes and Appearances.” While he, like others of his time, included both organic remains and inorganic objects within his definition of fossils, he correctly recognized the resemblance of some fossils to living organisms. For instance, he recognized the similarity between several fossil echinoids and living sea-urchins, as well as a fossil and living crab. Other specimens, however, were more difficult to relate to living species. For instance, Gessner placed various fossil ammonites alongside gastropods and serpents, and the fossilized spines of cidariods he placed within his chapter on fossil wood.

In addition to correctly drawing correlations between several fossil objects and living species, On Fossil Objects represented three important innovations in the history of paleontology. First, it was the first publication in which illustrations were used systematically to supplement a text on fossils.

On Fossil Objects was also the first work on fossils that clearly refers to a distinct collection of fossil objects. The precursors to museum collections were beginning to be aggregated in university and private collections in the 15th and 16th centuries, and these collections were an important step towards ensuring that naturalists were referring to the same species as they could reference a distinct type specimen. On Fossil Objects references the “fossil objects” collection of physician Johann Kentmann of Torgau as the source of many of the objects described within the book, providing a concrete, verifiable point of reference for other naturalists.

Finally, to support research for his book, Gessner corresponded with naturalists across Europe, and thus On Fossil Objects is also the first work on fossils to employ the use of a cooperative research community. This not only helped form the first scholarly paleontological community, but also ensured that a greater breadth of fossil objects could be represented within the book.

Gessner intended for On Fossil Objects to be merely a prelude to a much larger work on fossil objects akin to his Historiae animalium. Unfortunately, Gessner never had the opportunity to write his next masterpiece. He died of the plague in 1565, shortly after the publication of On Fossil Objects.

This innovative work on fossils, which helped shape the future of paleontology, was the last publication from one of history’s most influential naturalists. 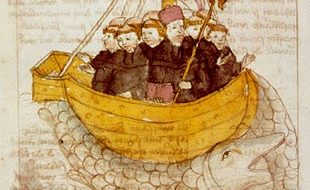