The study of mythology associated with fossils is a relatively new field, which Adrienne Mayor (2005) terms “the folklore of paleontology”; she continues by saying that “[c]ombining oral traditions and paleontology, and drawing on history, archaeology, anthropology, and mythology, the investigation of fossil legends offers a new way of thinking about pre-Darwinian encounters with prehistoric remains” (Preface, p. xxiv). Drawing from several resources, one can create a dynamic picture of what a large variety of cultures around the world and throughout time have thought were the myths associated with dinosaur, bird, and other prehistoric fossils.

Due to extensive travel, Greeks and Romans discovered fossils throughout the Mediterranean and into India (Mayor, 2000b, p. 8). The fossils of dinosaurs, mastodons, mammoths and other creatures were pervasive parts of the natural landscape in the Greek and Roman periods, helping to account for why Greeks and Romans developed mythologies about giant creatures as they sought to understand the presence of these remains (Mayor, 2000b, p. 8). Some highlights from Greek and Roman mythology include the following accounts.

In 675 B.C. when the Greek traveler, Aristeas, visited Scythian nomads in the Gobi deserts, the nomads told him about an area beyond Issedonia where griffins defended gold from the nomads (Mayor, 2000b, pp. 22-3). Aristeas wrote that the nomads would battle the griffins and that Issedonian accounts portrayed these creatures as lion-sized, with curved beaks like eagles (Mayor, 2000b, p. 23). Near Eastern cultures have been depicting such creatures since 3000 B.C. (Mayor, 2000b, p. 23). In the thirteenth century, the Chinese in Turfan and Lop Nur feared the surrounding deserts—which used to be Issedonian lands that were thought to be haunted by demons and dragons. In particular, the people feared the large bones in these deserts, calling them “dragon bones” (Mayor, 2000b, p. 38). In 1922, American adventurer Roy Chapman Andrews followed caravan trails through China to the Gobi desert and found the fossilized remains of Protoceratops (the size of a lion) and Psittacosaurus (which has a prominent beak); these fossil bones combine to form the image of the griffin, as described by the Scythian nomads and later the Greeks, Romans and other cultures (Mayor, 2000b, pp. 39-40).

In North Africa during the third to second century B.C., Carthaginians were digging trenches when they came upon two fossilized skeletons, each about 34 feet long (Mayor, 2000b, p. 153). The skeletons were assumed to be those of mythic giants, and Phlegon of Tralles, who served Hadrian (reigned between A.D. 117-38) at the time, claimed that the skeletons were proof that all life forms were becoming smaller (Mayor, 2000b, p. 149). This area, Ancient Carthage on the Gulf of Tunis, is rich with mastodon fossils, deinotheres, and mammoths (Mayor, 2000b, pp. 153-4), which paleontologists believe to be the source of the giant myths. Mayor provides evidence of the similarity between prehistoric fossils and Greek and Roman mythical creatures by citing contemporary Greek and Roman oral (transcribed) and written histories, as well as artwork produced during these periods.

Not to be ignored are Native American fossil mythologies from the Americas, also treated by Mayor (2005) in another work. She addresses tribes from North and South America and those mythologies believed to be based on prehistorical fossils by analyzing oral, Native American fossil lore preserved by various people during the colonial period, the sixteenth to eighteenth century, and the nineteenth and twentieth centuries (Preface, pp. xxxvi-xxxviii). Additionally, she interviewed scholars and Native Americans willing to discuss important myths concerning large creatures and monsters that she—and they—associate with fossilized creatures. Included in her findings are myths about monster bison, giants that were neither man nor animal (but were probably based on mastodon bones), a giant monster that promised its own extinction (thought to be a mammoth), giants in Tlaxcala, Mexico believed to have killed all the ancestors of the Tlaxcalteca people (presumed to be inspired by Colombian mammoth fossils), bird monsters (that were probably fossilized prehistoric birds of prey), giant lizards (assumed to be Triceratops) and sea creatures that battled flying creatures (assumed to be the marine fossils of mosasaurs and the fossils of the flying Pteradons, respectively). Each of these mythological creatures, and many more, addressed by Mayor, come from different Native American cultures throughout the Americas, though there are some overlaps occasionally in mythological themes, and the connection between myth and creature is largely supported by the actual presence of fossils in the region of the myth that reflect the appearance of the mythological creature being addressed.

Want to learn more about the connection between ancient myths and fossils? Then check out these resources (also cited above):

Tune in all week for more great fossil fun with our Fossil Stories event, including: 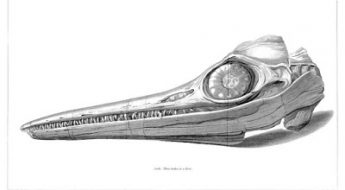