1820. Far west of the Galapagos Islands in the Pacific Ocean. A whaleship pursues a pod of sperm whales. Suddenly, an eighty-five foot long giant charges the ship, ramming it with its head not once, but twice, caving in the bows and sending the ship to a watery grave.

This is the story of the sinking of the Essex, the subject of Ron Howard’s movie adaptation of Nathaniel Philbrick’s novel In the Heart of the Sea, opening this Friday. The sperm whale that sank the Essex also served as one source of inspiration for another literary icon – the infamous white whale Moby Dick.

In addition to the big screen, another “white whale” hits the spotlight on a different stage this week – the scientific stage. Scientists from the Smithsonian Institution have just published new research on an extinct sperm whale that roamed the seas millions of years ago, which they’ve named Albicetus (“white whale”).

Today’s modern sperm whale was first scientifically described by Carl Linnaeus in the tenth edition of his 1758 Systema Naturae, a pivotal work that laid the foundation for our modern system of zoological nomenclature. Within this work, Linnaeus initially described the sperm whale as four separate species: Physeter catodon, Physeter macrocephalus, Physeter microps, and Physeter tursio. Today, we recognize that Linnaeus was actually describing only one species, which is now known by the binomial Physeter macrocephalus.

In the years following Linnaeus’ naming of the species, mystery and confusion surrounded the sperm whale, and over a dozen species names and multiple genera were published for the whale by the mid-1800s. Most of what information could be gleaned about the animal came from specimens that washed ashore, such as that depicted in Johann Jonstonus’ 17th century work Historiae naturalis de quadrupetibus libri, and from whaling expeditions.

In the 18th, 19th, and early 20th centuries, whaling was an important industry, and the sperm whale, with its spermaceti organ full of valuable sperm oil, was a primary target for whalers.  Despite the threats posed by the industry to whale populations, whalers were perhaps in the best position to learn more about the species they hunted. These expeditions also offered naturalists excellent opportunities to study these cetaceans.

One such individual was Thomas Beale (1807-1849), a British surgeon who, in 1830, joined the London whaling ship Kent as the physician on an expedition to the South Seas. Through his keen observations during the expedition, Beale gathered much information about the sperm whale, and, upon his return to England, published a fifty-eight page booklet for subscribers in 1835 entitled A Few Observations on the Natural History of the Sperm Whale, with an account of the Rise and Progress of the Fishery, and of the Modes of Pursuing, Killing, and “Cutting In” that Animal, with a List of its Favourite Places of Resort. The booklet was so well received that Beale revised, expanded, and republished it in 1839 as The Natural History of the Sperm Whale. This work served as the primary source of what was known about sperm whales at the time, and the Penny Cyclopedia hailed “Mr. Beale…in his excellent work on the ‘Natural History of the Sperm Whale,’ has done more to elucidate its habits and form than any other writer.”

Beale’s work was an important reference for Herman Melville, who acknowledged the book as a primary source of information for the cetological section of Moby-Dick; or, The Whale. Whaling provided additional inspiration for this work; the climax of Melville’s novel is based on the same events recounted within In the Heart of the Sea – the sinking of the Nantucket whaleship Essex. The crew that escaped the sinking of this ship spent three months at sea, covered 4,500 miles, and resorted to tragic lengths to stay alive. Of the 20 men who left the Essex, only 5 survived. Owen Chase, chief mate of the Essex, kept a journal of the events, which was later published as Narrative of the Most Extraordinary Shipwreck of the Whale-ship Essex, of Nantucket; which was Attacked and Finally Destroyed by a Large Spermaceti-whale, in the Pacific Ocean. Melville read Chase’s account of the event, and acknowledged its impact on his writing. The events were circulated within many natural history books, such as in this account within Johnson’s Household Book of Nature (1880).

While today there are only three extant species in the sperm whale family (the sperm whale and its relatives, the pygmy and dwarf sperm whales), their evolutionary history has seen many additional members. One of these, Albicetus oxymycterus, lived around 15 million years ago in the North Pacific Ocean, and now, thanks to research conducted by Dr. Nick Pyenson, curator of fossil marine mammals at the Smithsonian’s National Museum of Natural History, and Smithsonian research student Alex Boersma, we have a better understanding of this animal’s place in its family’s evolutionary history.

Mr. Charles A. Roe collected the type specimen for Albicetus oxymycterus from the sea cliffs near the original Santa Barbara Lighthouse (known as the Santa Barbara Light) sometime around 1909. Archival typewritten notes at USNM indicate that Mr. Roe had “first observed the specimen when he was a boy, some 30 years before.” After Mr. Roe’s death, his wife presented the National Museum of Natural History (then the United States National Museum) with the specimen in 1924.

At the time, well-known naturalist and paleontologist Remington Kellogg had an avid interest in this material (Kellogg would later become curator of vertebrate paleontology at USNM and make extensive contributions to the study of fossil marine mammals). Kellogg took it upon himself to describe the Santa Barbara specimen, and published his findings in 1925. He assigned the specimen to the genus Ontocetus, which was first named by Joseph Leidy on the basis on a large tooth found in the 19th century, which he thought belonged to a large marine mammal, and likely a sperm whale. Kellogg also thought this tooth, Ontocetus emmonsi, resembled the large dentition of his sperm whale specimen, which led him to place the Santa Barbara fossil as a new species in the genus Ontocetus. However, recent authors, weighing in favor of dissenting opinions about Ontocetus since the 19th century, have argued that the original tooth of Ontocetus emmonsi belongs not to a sperm whale, but to an ancient walrus.

In light of our improved understanding of the Ontocetus genus, Pyenson and Boersma re-evaluated the specimen and erected a new genus for it, Albicetus, or “white whale,” in homage to Melville’s Moby Dick.

“Since our specimen is most definitely an ancient sperm whale, we needed to give it a new and more appropriate genus name,” explained Pyenson. “While we don’t know what its skin color in life actually looked like, the color of the fossil is an ashen white. It only seemed appropriate to evoke Melville’s white sperm whale Moby Dick.”

Boersma and Pyenson published the name and their accompanying research about the fossil, which includes an estimation of the size of the whale and its place in the sperm whale evolutionary tree, today in the PLOS ONE article “Albicetus oxymycterus, a new generic name and redescription of a basal physeteroid (Mammalia, Cetacea) from the Miocene of California, and the evolution of body size in sperm whales.” The paper helps to resolve questions about how sperm whales have evolved into the singular creatures they are today, with insights on the increase in body size and changes in feeding strategies.

To accompany the redescription, Boersma and Pyenson created a 3-dimensional model of the specimen, available on the Smithsonian X 3D website (http://3d.si.edu). “In addition to making the specimen available for public viewing, the model was also necessary just for us to describe the specimen fully,” confesses Pyenson. “It weighs well over 300 pounds, taking four people just to slowly roll it over. Having the model was crucial for easy examination of the specimen from all angles for description and comparison.”

Thanks to Herman Melville, the White Whale is arguably one of the most recognizable figures in literary history. It is a figure with many identities. It is a harbinger of death; the personification of evil. It is a symbol of unattainable glory. But today, it is also something more. Today, the white whale is also Albicetus, a majestic, ancient, and complex creature that swam in the heart of the sea millions of years ago. 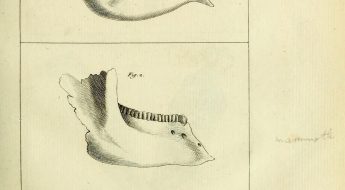 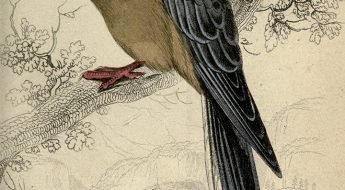