Charles Darwin is famous for the theory of evolution by means of natural selection. The theory hinges on the mutability of species, whereby the propagation of certain favorable traits within members of a species may gradually result in the evolution of that species. The question of when Darwin first came to believe in the mutability of species – when he became a “convinced transmutationist” – has long been a point of contention among historians of science.

There are two prevailing theories on the topic. The early conversion hypothesis states that Darwin developed a belief in the transmutation of species while on the Beagle voyage based on observed similarities between the fossils he was collecting and extant species in the area. The second theory, the late conversion hypothesis, holds that Darwin did not start believing that species were mutable until after the Beagle voyage, once experts in England had studied the specimens he collected. Today, most historians of science support the latter theory.

Brinkman has been studying the history of science for nearly twenty years. He specializes in late nineteenth- and early twentieth-century geology and vertebrate paleontology, especially in the American West, and is also interested in the spread of science from Europe to the New World and the trans-Atlantic exchanges of specimens and ideas. The question of when Darwin adopted a transmutationist viewpoint is of particular interest to Dr. Brinkman.

In a 2010 paper published in the Journal of the History of Biology entitled “Charles Darwin’s Beagle Voyage, Fossil Vertebrate Succession, and the ‘Gradual Birth & Death of Species,'” Brinkman argues that Darwin’s own journals from the Beagle voyage (which include discussions of the similarities between some of the fossils he was collecting and extant species – notably Glyptodontidae fossils and living armadillos – and reflections regarding fossil vertebrate succession – which Darwin himself later identified as a key element in his contemplation on the origin of species) suggest that Darwin’s adoption of transmutationism happened gradually but certainly during, and not after, the Beagle voyage.

Darwin’s journals and publications, as well as the books that Darwin was known to have in his Beagle library, provide key information that Brinkman used to support his arguments. As such, access to these materials is crucial to Brinkman’s research. Thanks to BHL, it’s easier than ever for him to obtain these resources.

Dr. Brinkman was introduced to BHL many years ago by Christine Giannoni, Museum Librarian at The Field Museum. Christine is a star promoter of BHL, having been involved with the program for many years; she currently serves as the Museum’s Member Representative to BHL. Thanks to her introduction, Brinkman is now a regular user of BHL.

“BHL is a wonderful resource,” lauds Brinkman. “I use a lot of old and obscure resources in my line of work, and BHL makes getting access to these sources a lot easier.”

When conducting research, Brinkman often refers to BHL 8-10 times a day, reading articles online or downloading relevant pages as PDFs. He also downloads title pages and significant figures for use in lecture slides. And while he may refer to specialized material when conducting specific research, the most-common type of material that he consults on BHL may surprise you.

“I probably use old museum annual reports more than any other single resource on BHL,” explains Brinkman. “This is especially useful, as a lot of these old reports have been relegated to offsite storage at many university libraries, which can sometimes mean long delays. BHL, however, provides them at the click of a button!”

So, whether it’s helping a scientist confirm the identity of a specimen collected in the field or providing primary source evidence to support the work of historians of science, it’s clear that BHL greatly increases the efficiency of research for those working in a variety of disciplines. We think Darwin would approve. 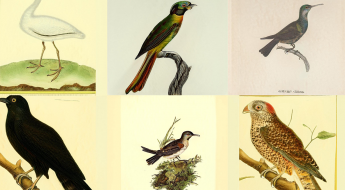 « Previous post
Tired of Poinsettias? Bah, Humbug! Then into the Smithsonian Libraries
Next post »
In Search of the White Whale: A Legend, a Fossil, a Living Mammal