When most people think about fossils, they generally think of body fossils, which are fossilized remains of parts of an organism’s body. But there is another type of fossil: trace fossils. Trace fossils are geological records of biological activity, and they provide important insight into an animal’s behavior.

One important trace fossil, which provides information about an animal’s diet, is the coprolite. That’s a fancy way of saying fossilized feces.

When coprolites were first discovered, they were identified as fossilized fir tree cones or bezoar stones. Bezoar stones were undigested masses found trapped in the gastrointestinal system, and were once believed to have magical properties, capable of neutralizing any poison. As an interesting aside, this claim was put to the test by surgeon Ambroise Paré in 1575. A cook caught stealing was sentenced to death by hanging, but at Paré’s request, agreed to be poisoned instead and fed a bezoar in the hopes that it would prove to be an antidote. The cook died in agony seven hours later.

William Buckland, famous for describing and validly naming the first dinosaur genus, Megalosaurus, had a theory about coprolites. He first became interested while studying cave deposits at Kirkdale. He suspected that the deposits that he found were actually preserved carnivore droppings, and even compared them with spotted hyena droppings in an attempt to prove his hypothesis.

In the mid-1820s, Buckland received the evidence he needed. Famous fossil-hunter Mary Anning provided Buckland with coprolites she discovered in the cliffs near her home in Lyme Regis, England. Anning’s attention was drawn to these objects, as she usually discovered them within the ribs or near the pelvis of the ichthyosaur fossils she was discovering. She also noticed that, when the coprolites were broken open, they sometimes contained fossilized fish bones, scales, and the bones of smaller ichthyosaurs. Mary herself believed them to be fossilized feces.

Buckland published his theory about the true nature of these fossils, and provided the name coprolite, in a paper which he read before the Geological Society of London in 1829 and was later published in the Society’s Transactions in 1835. Buckland recognized Mary Anning by name, giving her credit for her discoveries and deductions. 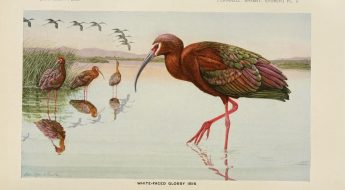