We hope you’ve been enjoying the fossil-mania this week with Fossil Stories! We’ve been exploring the fascinating history of paleontology, learning some great fossil facts, and hearing from experts (via a series of live webcasts) about current fossil research.

Our posts have demonstrated the important role that natural history publications have played in the history of paleontology. These works disseminated new research and ideas, documented the evolution of human knowledge about fossils and their origins, and recorded the first scientific descriptions of many ancient creatures.

But this literature is important not just for the historical information it provides. It is also highly relevant to modern paleontological research.

“Traditional ways of knowing about the fossil record are still relevant for modern questions in paleontology because specimens matter,” explains Dr. Nicholas D. Pyenson, Curator of Fossil Marine Mammals at the Smithsonian National Museum of Natural History. “Many important fossils were intially described and published in monographic, folio formats, and in many cases, those descriptions can be still be used 100-150 years later. I use them all the time.”

And indeed he does. During a recent trip to Argentina, Dr. Pyenson was able to compare specimens in the Museo Argentino de Ciencias Naturales with illustrations of those specimens in BHL alongside 3D scans of the related cetacean.

The importance of historic literature to modern fossil research is echoed by those in the field of paleobotany as well.

“Just as in research on living plant and animal biodiversity, research on the fossil record of plants and animals depends crucially on the published literature,” emphasizes Dr. Patrick Herendeen, Director of Systematics and Evolutionary Biology at the Chicago Botanic Garden. “Plant systematics literature goes back hundreds of years, and having access to this literature is essential for ongoing research in plant taxonomy and systematics. This is equally true for paleobotany.”

Knowing that historic literature is so important to modern paleontological work, we asked paleontologists at several BHL partner institutions to share some of their favorite historic publications with us. We think the results constitute a pretty awesome Recommended Reading List for Paleontology Enthusiasts!

“Not surprisingly, my favorite early book on paleontology is Recherches sur les ossemens fossiles de quadrupèdes by G. Cuvier (first published in 1812, with three later editions). Not only did it found the scientific study of fossil vertebrates but it is written in a clear yet elegant style but that makes it a pleasure to read. Cuvier did not just describe fossils but tried to interpret their anatomy in functional terms. As a foundational work in the field, it will always be relevant to researchers interested in the fossil record of backboned animals.”

Dr. Gandolfo’s favorite early paleobotany book is Ancient Plants, written by Mary C. Stopes in 1910. When asked why it is her favorite, Dr. Gandolfo referred to a quote from the book: “The lore of the plants which have successively clothed this ancient earth during the thousands of centuries before men appeared is generally ignored or tossed on one side with a contemptuous comment on the dullness and ‘dryness’ of fossil botany.” According to Dr. Gandolfo, “This book was written in 1910 and even after 105 years of incredible advances in the field of Paleobotany, this sentence still reflects what people feels about Paleobotany.”

The Ceratopsia are a group of herbivorous, beaked dinosaurs that thrived during the Cretaceous Period. They include such iconic genera as Triceratops and Montanoceratops. The name Ceratopsia was coined by Othniel Charles Marsh in 1890, and in 1907 he, along with John B. Hatcher and Richard S. Lull, published a monograph on the group, entitled The Ceratopsia. According to Dr. Makovicky, this work is one of his favorites and a classic amongst the pre-1923 published materials.

Dr. DiMichele’s favorite historic paleontology work is Description of the Coal Flora of the Carboniferous Formation in Pennsylvania and Throughout the United States, by Leo Lesquereux (1879-80). According to Dr. DiMichele, “This is the foundational book/atlas on American Carboniferous (coal age) floras and contains detailed descriptions and illustrations of many of the species that occur commonly in coal fields of the eastern and midwestern US. Many of the species that occur in the rocks I study were first described in this set of volumes, so the books remain a primary source of information to which I turn regularly.”

Dr. Pyenson’s favorite historic paleontology book is Ostéographie des cétacés vivants et fossiles (1868-79), by Pierre Joseph Beneden and Paul Gervais. “This work showcased specimens and species that no one had really seen outside of the areas where the specimens were collected,” explains Dr. Pyenson. “It’s a catalog of the world’s whales, and the authors didn’t discriminate between fossil and modern species. It’s cool that these were integrated together into one work this early on, before it was fashionable to do so.”

Thanks to all of our experts for sharing their favorite historic publications with us! We hope you’ve enjoyed our series of blog posts this week highlighting key works in the history of paleontology. Can’t get enough of the fossil publications? Then check out other great works in the BHL Fossil Stories digital book collection. 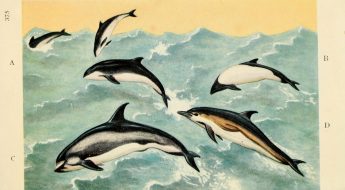