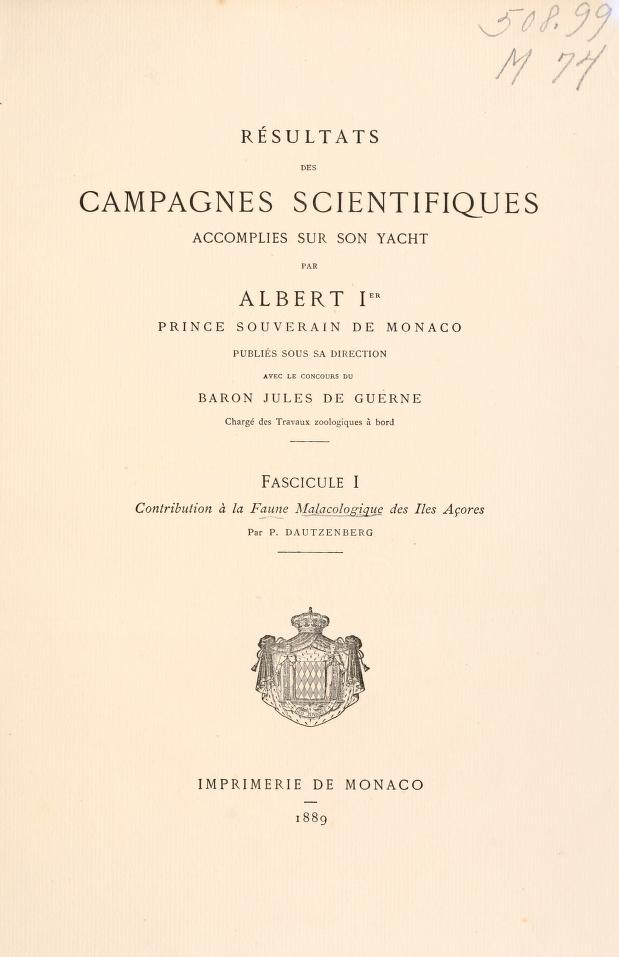 The Prince, in addition to having been the head of state of the Principality of Monaco, was an important figure in the development of the ocean sciences in the decades before and after the turn of the 20th Century. HSH Prince Albert I of Monaco’s pioneering science career included the exploration of the Mediterranean, the south and north Atlantic regions, and polar regions north of Norway known as the Svalbard Archipelago. Prince Albert I of Monaco was also considered a preeminent statesman who understood the importance of the preservation and stewardship of the most fragile areas of our earth, and the importance of science as a source for the foundation of peace on earth: Science: “that force that transforms living conditions, peoples’ mentalities, and international relations.” – Prince Albert I of Monaco (1910)

One hundred and seventy years after his birth, the work of Prince Albert I is today carried on by his great-grandson, the current head of state of Monaco, HSH Prince Albert II.

On July 8th of this summer, Prince Albert II of Monaco touched down at Barnstable Airport on Cape Cod, Massachusetts to visit the laboratories and marine work environment of the scientists who work at the Marine Biological Laboratory (MBL, founded in 1888, is an affiliate institution of the University of Chicago.) Activities during the Prince’s visit included laboratory visits, an exploration of the local waters aboard the MBL research vessel Gemma, and a panel discussion held with MBL interim director Neil Shubin and scientists from MBL’s Ecosystems Center: “Adapting to a Climate-Changed World.” The Prince came to MBL also to announce his support, through the Prince Albert II of Monaco Foundation, for the development of a website, SeaBase at MBL, a new open-access infrastructure for integrated data on marine organisms, their genomes, their microbiomes, and the environmental status of their habitats. Later during his visit, HSH Prince Albert II walked down the street to visit the Woods Hole Oceanographic Institutions’ (WHOI was founded in 1930) Center for Marine Robotics “Dunkworks” facility.

Woods Hole has hosted heads of state in the past: in 1975 Emperor Hirohito of Japan, whose life long hobby/profession was as a marine biologist (known for his detailed descriptions of marine species), visited scientists at both the MBL and WHOI as well as making a visit to the collections of the MBLWHOI Library. 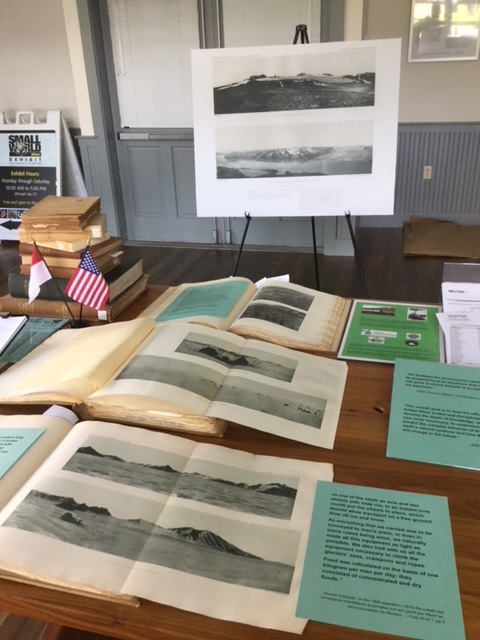 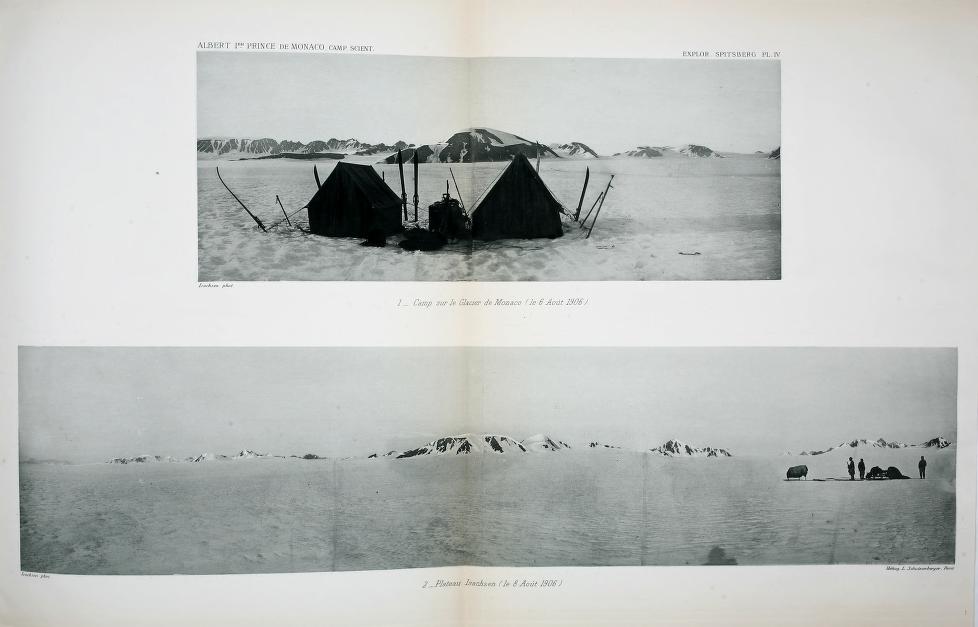 The Librarians prepared a small exhibition for a visit from the Prince on July 9th centered upon the work of Prince Albert I. Librarians Jen Walton and Matt Person researched the past and present connections between Monaco and the MBL, and they also studied specific volumes from Résultats des campagnes scientifiques accomplies sur son yacht par Albert Ier, prince souverain de Monaco (donated to the MBL by Prince Albert I) relative to current MBL environmental and biological research. While the physical volumes were used in the exhibition, the librarians consulted the digital volumes in the BHL for multiple reference purposes.

In addition to volumes from Résultats…, the exhibit included a special chair, now a part of the WHOI Archives collection, prepared for the exhibit by current WHOI Archivist Dave Sherman. In 1933, while on a marine biological station tour of Europe, WHOI marine chemist Professor Norman Rakestraw visited the Oceanographic Institute of Monaco and was given a gift of a wooden chair, which had been part of the late 19th Century oceanographic research yacht Hirondelle, owned and operated by Prince Albert I of Monaco. The Hirondelle chair was donated by Rakestraw to WHOI upon his return to the United States. 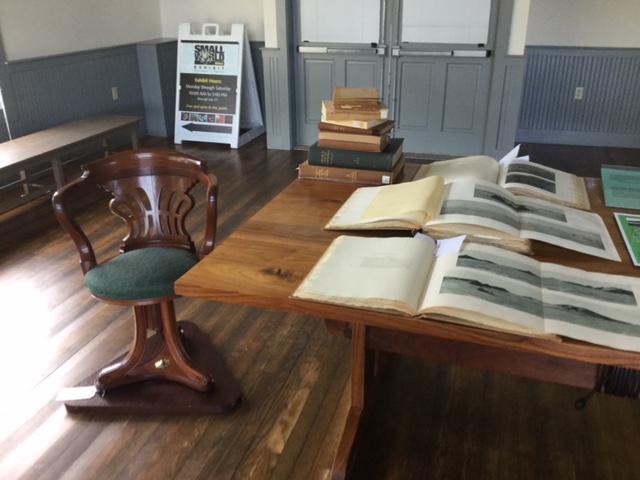 Jen Walton concentrated her research on one of the Cephalopod volumes, Volume 17 (1900), and in particular this image of a large squid which was named in honor of the family of the Princes Albert I and Albert II: Grimalditeuthis richardi. 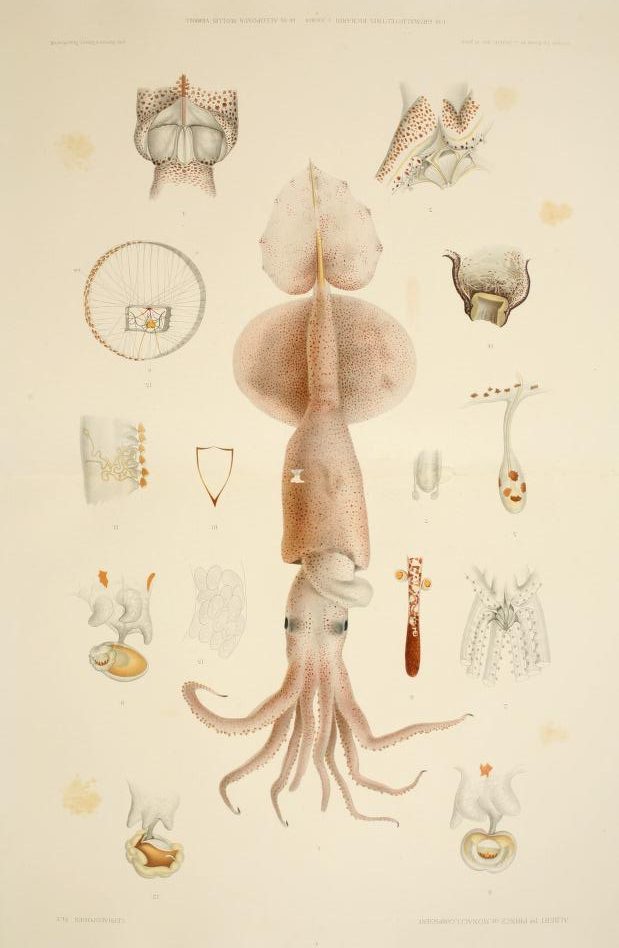 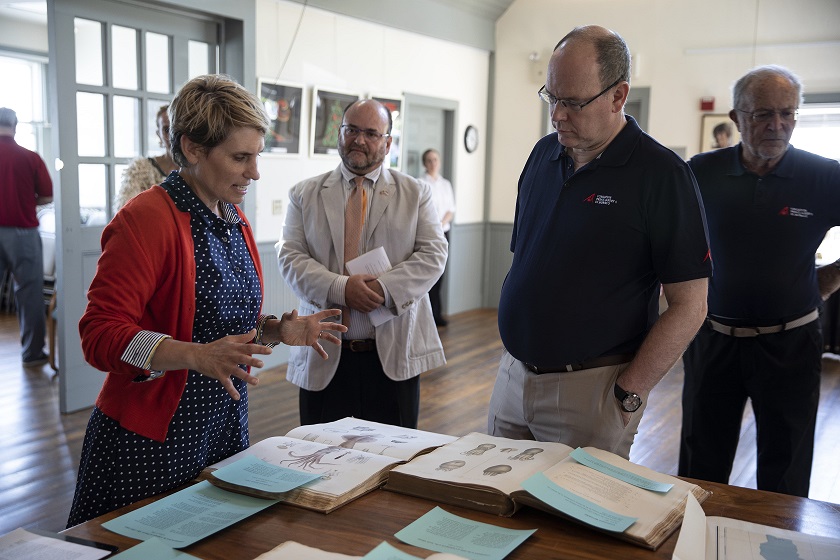 Matt Person told highlights of the story of the four expeditions (through studying Volumes 40-44 of Resultats…) to the Svalbard Archipelago which Prince Albert I led in 1898, 1899, 1906, and 1907. Matt Person also showed Prince Albert II an 1899 bathymetric chart of the Azores Islands and explained how the use of data from multiple sources collected by Prince Albert I over time created a single complete work…and this was compared to current arctic research at the Ecosystems Center of the MBL, which has drawn data over many years from multiple polar region collection sites, to inform global studies of climate change. 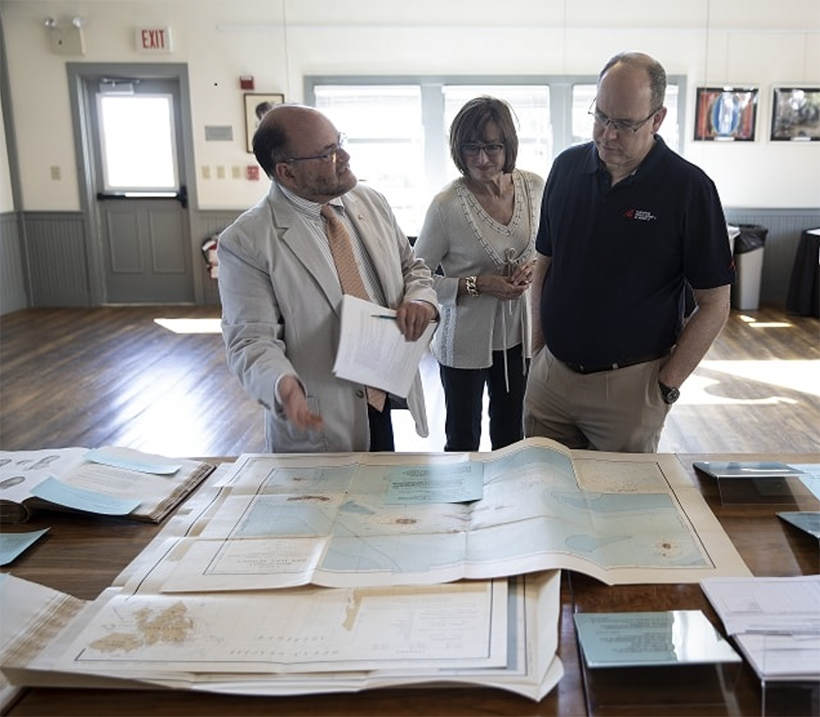 While both Jen Walton and Matt Person used the physical book volumes in the research they performed to become conversant in the work of Prince Albert I , they also employed the full text search and OCR (optical character recognition) files from the Biodiversity Heritage Library and BHL Affiliate the Internet Archive, for which they used an online translation tool to convert French text into English. This translation process was essential to gain a clearer understanding of the text, which informed the illustrations and photographs and narratives of the exhibition as explained to Prince Albert II.

The MBLWHOI Library is a Biodiversity Heritage Library founding member, currently an Affiliate, and our staff was part of the development team of the original taxonomic name server, which extracted scientific names from scanned literature. Our staff also formed part of the original “BHL worker bees”, who developed the implementation of much of the day-to-day workflows related to the operation of the online digital library. Matt Person is the Tech Services Coordinator of the MBL WHOI Library and a member of the BHL Collections Committee.

« Previous post
Q: How many BHL’s can you fit into a single meeting?
Next post »
Historic Literature Meets Modern Research: Discovering Octocorals in the Deep Sea of the Northeast Atlantic Ocean