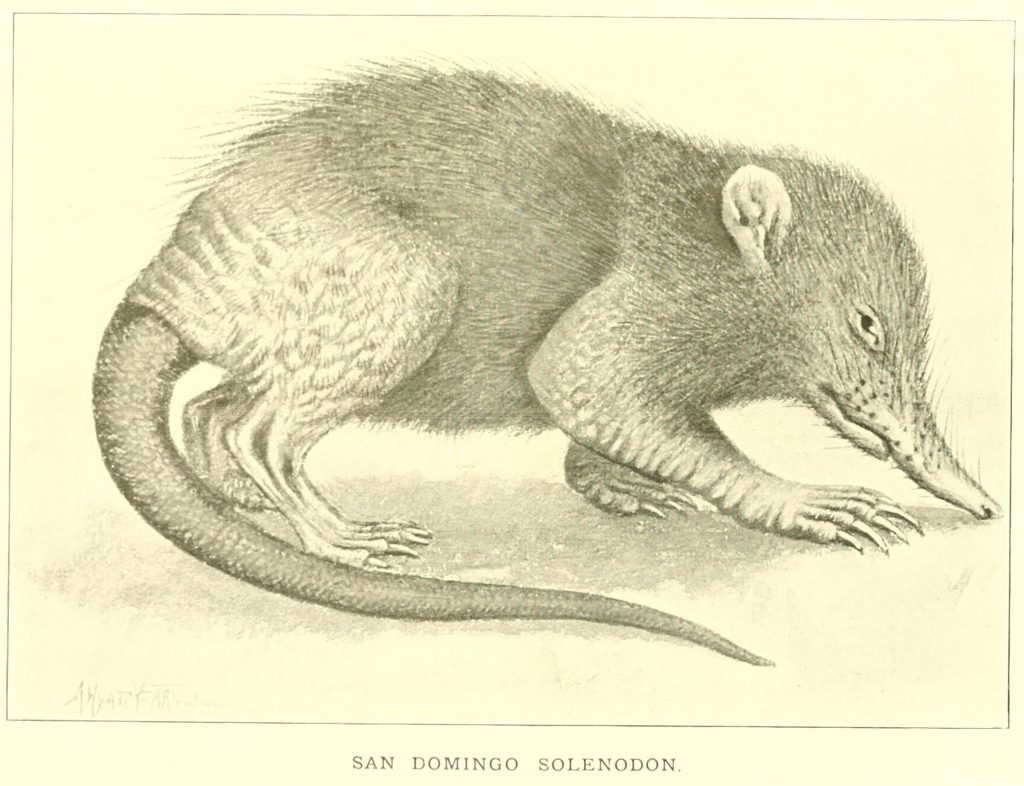 Hispaniolan solenodon (Solenodon paradoxus). Illustration from “XIII. Notes on the habits and external characters of the Solenodon of San Domingo (Solenodon paradoxus)” by Alpheus Hyatt. The Annals and Magazine of Natural History. Ser. 7, v. 20 (1907). Contributed in BHL from Smithsonian Libraries.

The Hispaniolan solenodon is a unique, and at first glance somewhat peculiar, animal. Even its scientific name conveys the unusualness of the species — Solenodon paradoxus.

One of two extant solenodon species (the other being the Cuban solenodon), the Hispaniolan solenodon is found only in Haiti and the Dominican Republic. It, like its Cuban counterpart, is endangered.

As members of the mammalian Order Eulipotyphla, which includes insectivores such as shrews, hedgehogs, and moles, solenodons diverged from all other living mammals over 70 million years ago. They are only found in the Caribbean, making them an important priority for the conservation of evolutionary diversity. This long history means that they have survived countless extinction events and only today are threatened.

Dr. Alexis Mychajliw (Postdoctoral Research Fellow at the La Brea Tar Pits & Museum of the Natural History Museum of Los Angeles County) has been studying the Hispaniolan solenodon as part of her research on Caribbean mammals for more than five years. Much of her work has focused on flipping the narrative of the Hispaniolan solenodon from endangered weirdo to resilient survivor. 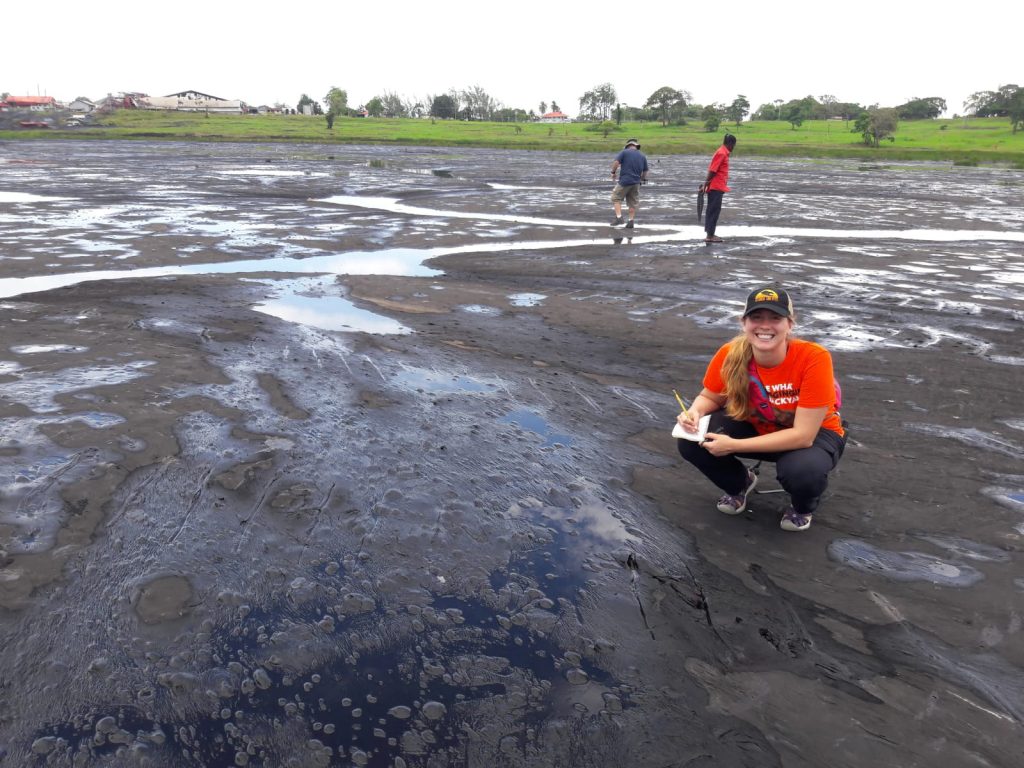 In partnership with the National Museum of Natural History in Santo Domingo and the conservation group Grupo Jaragua, Mychajliw and her colleagues have taken a “conservation paleobiology” approach to understanding the long-term drivers of decline and resilience for the Hispaniolan solenodon and Hispaniolan hutia (Plagiodontia aedium) — the two remaining nonvolant mammals in Hispaniola.

Together with her colleagues Lauren Gibson, Ernst Rupp, and Yolanda Leon, Mychajliw worked to better understand the determinants of the decline of solenodons across Hispaniola. Specifically, is this decline a recent trend linked to introduced predators like dogs, is it linked to the first arrival of humans, or part of a larger arc of decline linked to millennial scale climate change? They addressed these questions by compiling data on solenodon occurrences over time from numerous sources — including some historic documents from the Biodiversity Heritage Library (BHL). 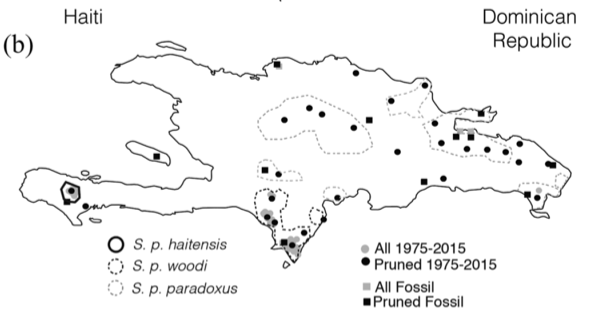 A map showing the localities used in the study on S. paradoxus published in Conservation Biology in 2019, including some taken from BHL documents (Gibson et al 2019).

“XIII. Notes on the habits and external characters of the Solenodon of San Domingo (Solenodon paradoxus)” by Alpheus Hyatt, published in 1907, was a particularly informative source for this research.

“I would never have found this document without BHL,” shares Mychajliw. It is now one of her favorite publications in the Library.

The article begins: “Although Solenodon paradoxus of San Domingo and Haiti was discovered and imperfectly described as early as 1839, several years before the Cuban species (Solenodon cubanus) was known to science, it is still practically unknown to recent zoologists. The published descriptions of this rare and interesting mammal are vague and unsatisfactory.”

Hyatt then proceeds to discuss the species’ rarity — even as early as 1900, it was already in decline: “And when, in December 1906, I undertook a collecting-trip to San Domingo with the avowed intention of obtaining the Solenodon, prominent zoologists stated that the quest was hopeless, one of them saying I would be as likely to secure specimens of ghosts as of Solenodon paradoxus” [emphasis added]. 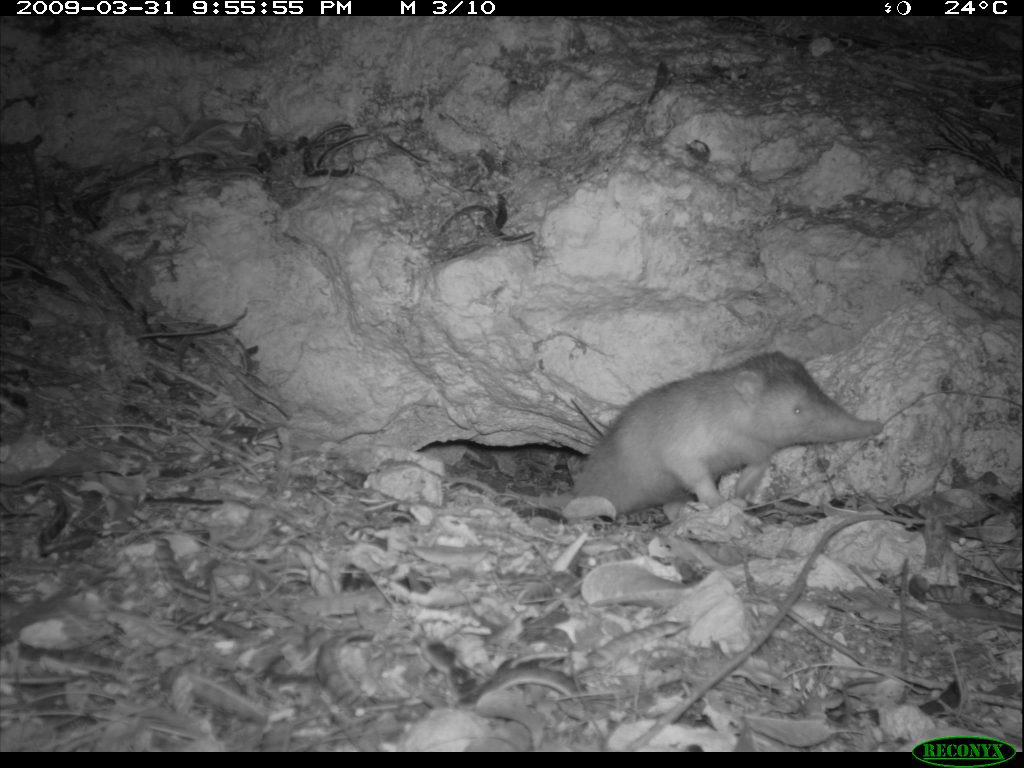 A ghost, according to Alpheus Hyatt’s colleague – a photo of the Hispaniolan Solenodon (S. paradoxus) as it emerges from its den in the Dominican Republic. Mychajliw and her colleagues combined BHL literature searches with camera trap surveys conducted by Grupo Jaragua to understand how their distribution has changed over time. Photo by E Rupp of Grupo Jaragua.

Hyatt also provides clues to the threats facing solenodons, writing that dogs are effective predators (unfortunately, a trend that has only increased): “They also claim that when pursued it frequently trips itself and tumbles heels over head. When hunted with dogs, it thrusts its head into the nearest hole or shelter, and allows itself to be captured without resistance.”

Ultimately, Mychajliw and her colleagues found that humans, and in particular their dogs, are a recent and significantly urgent threat for solenodons. While solenodons survived past climate change and the arrival of humans, the last hundred years have provided an unprecedented challenge for this wonderful and weird species.

Mychajliw’s work on Caribbean mammals is part of her larger research speciality working at the intersection of paleoecology and conservation biology. In addition to her work in Hispaniola, she also studies collections excavated from asphaltic fossil deposits in Los Angeles at the La Brea Tar Pits and Trinidad as part of the La Brea Tar Pits & Museum international “BREAS” initiative (Bridging Research and Education in Asphaltic Sites) to help create pictures of these regions’ ecosystems throughout history.

Using fossils, historic data extracted from the literature, and modern-day observations of living mammals, Mychajliw reconstructs population trends and the environmental and anthropogenic perturbations that may shape their trajectories over time. These ecological experiments can help guide conservation planning and inform specific management decisions.

BHL has been an important source of literature for Mychajliw’s research since she first discovered it as a PhD student. Her research into the drivers of Caribbean mammal extinction over the past 10,000 years required developing species lists for each island, a general understanding of extinction timing, and reconstructing the species’ body sizes — a task that seemed likely to require many museum visits to take measurements of teeth and bones.

“Luckily, I found BHL!” lauds Mychajliw. “As an early graduate student, I didn’t have the time or funds to travel to so many different museums. Instead, through BHL, I found many historic documents of the earliest excavations in the Caribbean.”

Using documents like “A second collection of Mammals from caves near St. Michel, Haiti” (Miller 1929), Mychajliw was able to obtain locality information and measurements on specimens collected from the Caribbean. She compiled this information into a database, which she could use to populate body size equations and make estimates of extinct vs. extant species body sizes.

Through this work, Mychajliw identified two waves of size-biased extinctions in the Caribbean, with large mammals disappearing at a similar time as human arrival, followed by smaller species disappearing with the arrival of European commensals such as rats and cats. This finding was communicated in a 2017 publication in the Annual Review of Ecology, Evolution, and Systematics (Cooke et al 2017). 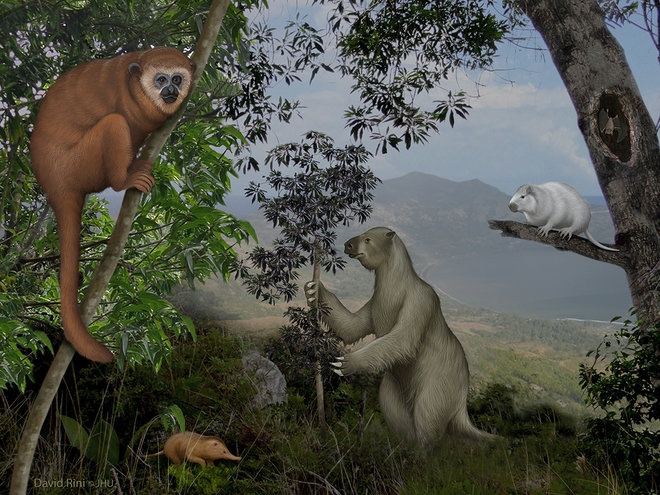 A view of the Caribbean island of Hispaniola, approximately 5,000 years ago. This community would have included enigmatic monkeys, pygmy ground sloths, giant rodents, and venomous insectivores. Today, only 2 of 25 nonvolant mammals survive. Illustration by D Rini.

“BHL is an incredible resource that is particularly helpful for early career researchers who may not have the funds or connections to visit multiple museums or institutions to collect data,” affirms Mychajliw.

As Mychajliw’s testimonial demonstrates, historic literature like that available at BHL helps researchers incorporate centuries of knowledge into modern research. This can inform studies on everything from paleoecology to conservation, taxonomy, and even the history of science.

“The documents held in BHL inform not just my science itself, but also bring an historical perspective on those who did science before me and how the practice of science has evolved,” explains Mychajliw. “For example, in reading many of the early accounts of scientists who collected samples in the Caribbean, I can see how our societal attitudes on the importance of local knowledge has (hopefully!) changed and become more inclusive in the present day. All of the references I make to early Caribbean authors are male (a “Mr.” so and so receiving this specimen or that) – and I am happy to see more diversity in the present day.”

As Earth’s biodiversity continues to decline at a rate unprecedented in human history, an understanding of the past — from the forces that shape ecosystems to the responses of species to various stressors over time — can help inform strategies and policies to address and combat modern-day threats. By providing open access to global literature collections and the valuable data they contain, BHL will continue to provide researchers with the information they need to study and conserve life on Earth.

Dr. Alexis Mychajliw is a Postdoctoral Research Fellow, La Brea Tar Pits & Museum (part of the Natural History Museum of Los Angeles County). Her research specialty is working at the intersection of paleoecology and conservation biology. She works both at the La Brea Tar Pits in California and in the Caribbean, where she has recently started working in Trinidad, as part of the La Brea Tar Pits & Museum international “BREAS” initiative (Bridging Research and Education in Asphaltic Sites). She has also been working on the Caribbean island of Hispaniola for more than 5 years, in partnership with the National Museum of Natural History in Santo Domingo and the conservation group Grupo Jaragua. 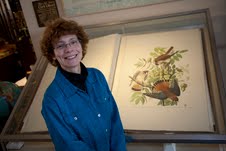 BHL and Our Users: Wendy Wasman 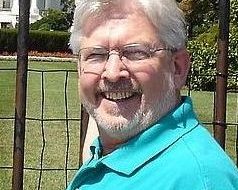 « Previous post
Unearthed: Exploring Paleobiology Literature with Smithsonian Libraries
Next post »
Athanasius Kircher’s Cabinet of Wonder: The Man Who Believed in Everything and His Museum of the Miraculous, Universal, and Absurd