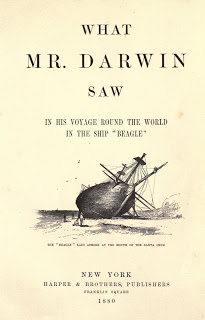 The great scientific discoveries that have been made during the many incredible exploring expeditions throughout history have long interested both scientists and laymen alike, and perhaps none more so than the voyages undertaken by Charles Darwin himself on the H.M.S. Beagle. While the appeal of the narratives of these expeditions to adults may seem obvious, engaging children in such works is not always simple. The concern with “interest[ing] children in the study of natural history, and of physical and political geography”so that they might exhibit enthusiasm for nature throughout their lives is the chief concern of this week’s book of the week, What Mr. Darwin saw in his voyage round the world in the ship “Beagle” (1880), compiled from Darwin’s Journal of researches into the geology and natural history of the various countries visited by H. M. S. Beagle.

In a preface directed towards parents, the author writes,

“The compiler has thought it an advantage to connect stories about a great variety of animals with one person, and he an observer of such credibility and authority that little if anything that was learned of him would have to be unlearned. Mr. Darwin is, of course, pre-eminently such an observer. On the other hand, by carefully connecting these stories with the places on the earth’s surface where the animals were studied, a correct notion will be had of the distribution of the animal kingdom, with a corresponding insight into the geography of the globe in its broadest sense.”

What Mr. Darwin Saw is divided into four parts: Animals, Man (describing the people and cultures encountered on the voyage), Geography (describing the cities, rivers, mountains, valleys, plains, etc. seen on the expedition), and Nature (discussing the “grander terrestrial processes and phemonena” encountered). The original text comes from Darwin’s writings, though some small alterations have been made for the publication to take into account audience and overall organization. Since the changes are so minimal, the work is still attributed to Charles Darwin.

Before beginning the main narrative of What Mr. Darwin Saw, children are given a short biography of Charles Darwin and a description of the voyage of the H.M.S. Beagle. Children are then urged to test their own powers of observation by counting how many animals they can find in an accompanying woodcut by Thomas Bewick.

The description of the animals, people, geography and nature in the following sections of text are rich and inviting, as they are presented in a highly conversational tone produced from Darwin’s own observations. Children would be highly entertained to read Darwin’s description of the Guanaco, or Wild Llama’s, reactions around strange behavior in humans. They would likewise be thrilled to read of the dangerous encounter Darwin and his team experienced with an ice cliff, and their imaginations would be stimulated by Darwin’s description of the coral and coral architects around the visited lagoon islands. And while these writings may have been directed at children, they are nevertheless singularly engrossing for adults as well. So, whether child or adult, take a few minutes to look through Darwin’s narrative of the biodiversity, cultures and geography encountered on that monumental voyage of the H.M.S. Beagle.

This week’s book of the week, What Mr. Darwin saw in his voyage round the world in the ship “Beagle” (1880), by Charles Darwin, was contributed by the University of California Libraries. 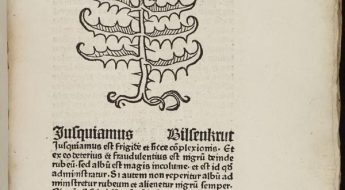 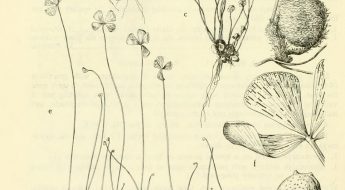