By now, you’ve probably heard the buzz about Magicicada septendecim: a type of cicada that only appears every 17 years in unimaginably large numbers.  Periodical cicadas like the Magicicada septendecim are unique to the United States, and occur in the northern midwest and eastern regions of the country.  These cicadas have an interesting physiology and reproductive system, which is explored in our book of the week taken from the Smithsonian Miscellaneous Collections, Volume 89, Number 8: Morphology of the Insect Abdomen Part II: The Genital Ducts and Ovipositor, by R. E. Snodgrass.  This unusual, 1.5-inch-long insect has a black body and large red-orange eyes, clear wings with orange veins, orange stripes on the underside of its abdomen, and an orange spot on its thorax.  It spends most of its life in one group, called a “brood,” in underground burrows one to three meters below ground.  During the 17 years they remain underground, the cicadas go through a few stages of development and feeding until the nymphs tunnel out to the surface with their brood, usually around May, as they are doing now in certain parts of the country (Gulker).   Broods contain such large numbers of cicadas that they can overwhelm their predators who can quickly become too full after eating from the wealth of available bugs, leaving enough cicadas leftover to reproduce and make the next generation brood. 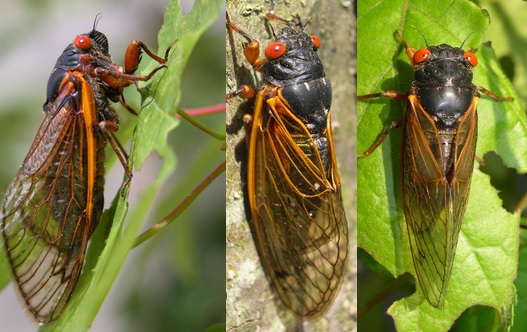 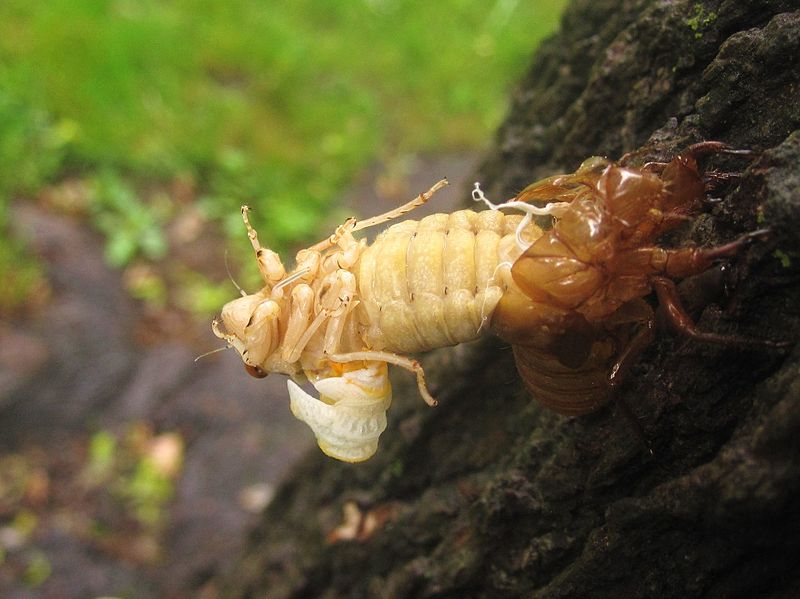 Cicada molting its exoskeleton upon emerging from underground after 17 years.  From Wikimedia Commons.

The Magicicada septendecim’s only purpose once it emerges from its underground burrow is to reproduce (and the by-product of its emergence is that it feeds local wildlife and its carcasses nourish the soil). The nymphs will dig into the surface of nearby trees, shed their exoskeletons, and become adults ready to mate.  Males will sing together and fly around until they can convince a female to mate, and the cicadas will mate several times.  After mating, the female will use her ovipositor to inject up to 500 eggs inside of twigs, and die quickly thereafter.  Around July, both male and female cicadas will have died, and the new, tiny nymphs will burrow underground to wait another 17 years until re-emerging.  One fascinating fact about the Magicicada species is that it has a special song to indicate alarm, and when one insect begins “singing” it, others will join in.  Additionally, this insect has three courtship calls, one of which is supposed to sound as if the cicada is saying the word “Pharaoh” (see Gulker’s article, “Magicicada septendecim: Linnaeus’ 17-year cicada,” at http://animaldiversity.ummz.umich.edu/accounts/Magicicada_septendecim/for more information).

Our book of the week takes a more detailed look at the sound-producing and reproductive organs of these cicadas, thanks to author R. E. Snodgrass.  Snodgrass notes that “The 17-year cicada. . .has a curious and unusual development of the genital chamber, which is provided with a secondary posterior passage giving exit to the eggs directly into the channel of the ovipositor” (91).  He mentions that there has “been so much misinformation given on the subject of the abdomen of the cicada” that he would like to direct his attention to this matter (91).  What follows is an illustration of several angles of the female Magicicada septendecim abdomen. 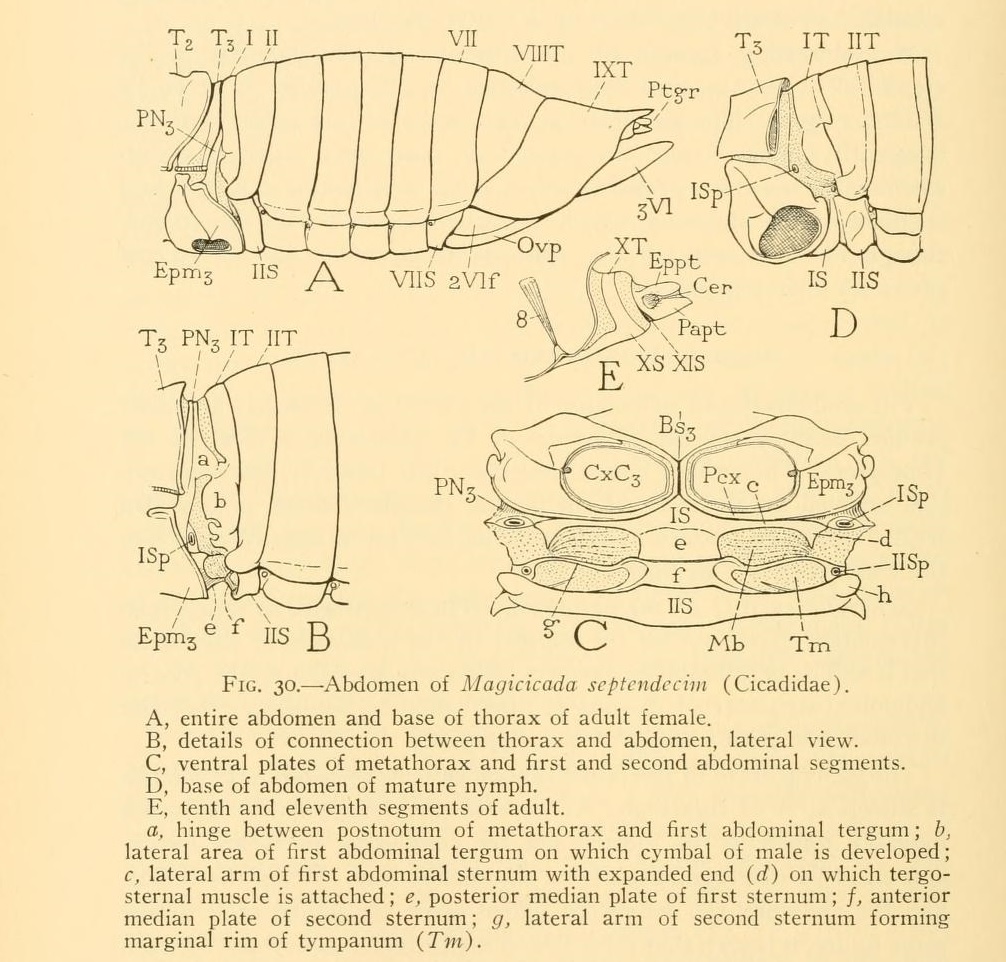 Fig. 30.  Views of the female cicada’s abdomen, including the egg-laying ovipositor, marked “Ovp” in illustration A (92).

Snodgrass describes the female abdomen in figure 30, illustration A:

At its base the abdomen is broadly but movably joined to the thorax, but the connecting parts are mostly concealed by overlapping parts of the metathorax.  When the thorax and the abdomen are somewhat pulled apart, as shown at B of the same figure, it is seen that there lies in the infolded membrane between the metatergum (T3) and the first abdominal tergum (IT) a well-developed narrow postnotal plate of the metathorax (PN3), which bears the large third phragma, and is fused ventrally with the metapleural epimera (Epm3) in the usual manner. . .The [first abdominal tergum] (IT) is a narrow, transverse plate united with the second tergum (IIT); its lateral part presents an enlarged oval area (b), which corresponds with the area of the sound-producing cymbal of the male. (91–92)

Snodgrass continues by describing the sound mechanism in the cicada’s abdomen:

The sternal plates of the first and second abdominal segments are highly modified, and they are separated by a deep inflection that forms a large ventral cavity at the base of the abdomen.  This cavity is ordinarily closed to a narrow slit between the sternal plates. . .In the male cicada the cavity is much larger than in the female and contains the so-called “resonance” membranes, or “mirrors”, which are now regarded as tympana for the reception of sound vibrations. . .The tympanal cavity can be opened and closed by movements of levation and depression of the abdomen on the lateral hinges (fig. 30 B, a) between the postnotum and the first abdominal tergum, the movements being produced by the dorsal and ventral muscles of the first abdominal segment. (92–93)

What follows are two illustrations of the female Magicicada septendecim’s reproductive organs: 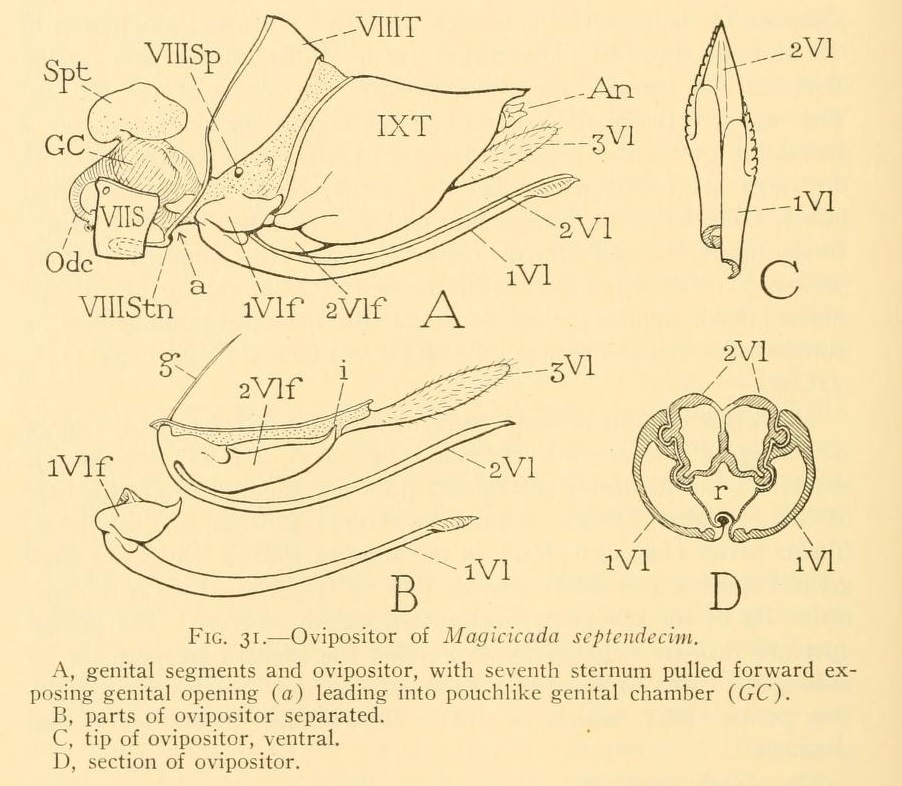 Fig. 31. A more detailed look at the genital segments and ovipositor of the female cicada (96). 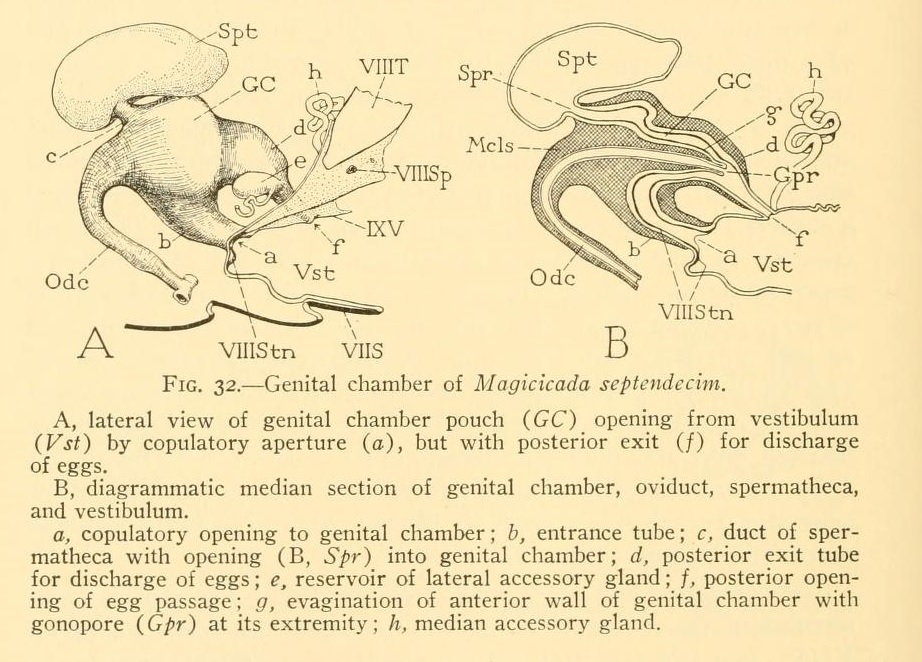 Fig. 32. The genital chamber of the female cicada, which has two genital openings–one for copulatory purposes, and one for expelling eggs into the ovipositor (a needle-like protrusion that injects up to 500 eggs inside nearby twigs to allow the eggs to hatch) (98–99)

The female cicada’s egg-laying ovipositor is visible in fig. 30 as “Ovp.”  Snodgrass says that “Above the seventh sternum [see fig. 30 A, VIIS] is a small vestibular cavity (fig. 32 A, Vst), in the anterior wall of which is a large genital opening (a) above a small fold (VIIIStn), which is the posterior lip of the otherwise invaginated eighth sternum.  The genital aperture may be exposed by depressing the seventh sternum, or by pulling the latter forward (fig. 31 A, a).  It leads into a large copulatory pouch (GC), which. . .is the true genital chamber” (95).

These tiny, intricate reproductive organs are the source of life that brings forth the overwhelmingly large numbers of cicadas we see every 17 years—sometimes in such large numbers that the cicadas will cause traffic problems and significant tree damage.  Even though the appearance of a brood might remind us of a Biblical plague of locusts, the Magicicada septendecim is an amazing insect that will sacrifice itself in large numbers just so the remaining members of the brood can reproduce and begin another 17-year cycle.

Book of the Week: The Berry That Changed The World

« Previous post
For the Love of Cats: Harrison Weir’s Extraordinary Dedication to the Cat
Next post »
The Biodiversity Heritage Library at the American Library Association Annual Meeting 2013