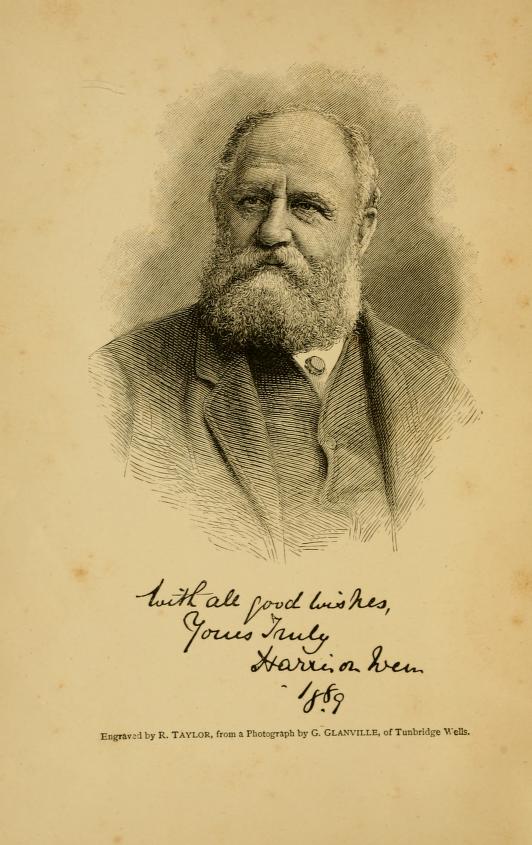 Harrison Weir, President of the National Cat Club, Judge at the first cat show in London, and all-around cat lover and enthusiast.

This book of the week, an 1889 work entitled, Our Cats and All About Them: Their Varieties, Habits, and Management; and for Show, The Standard of Excellence and Beauty; Described and Pictured by Harrison Weir, F.R.H.S., was written by Harrison Weir, President of the National Cat Club which he formed in 1887. What is equally delightful to Weir’s loving descriptions of cats, their looks and their behavior, are his beautiful illustrations of cats throughout the book. One striking aspect of this book is the fact that Weir’s descriptions of nineteenth-century feelings and issues concerning the cat are so very similar to our own. For instance, the author mentions that people often would ask him how to stop cats from scratching the furniture, or talk about what a wonderful personality their cat had (1), or how ingenioius their cats were for being able to open doors by themselves:

Take for instance, how very many cats will open a latched door by springing up and holding on with one fore-leg while with the other they press down the latch catch, and so open the door; and yet even more observant are they than that…as I have shown by a case…in which a cat opened a door by pulling it towards him, when he found pushing it of no avail.  The cat is more critical in noticing than the dog.  I never knew but one dog that would open a door by moving the fastening without being shown or taught how to do it.  Cats that have done so are numberless. (6-7)

In addition, he points out what many today can observe in their own multi-cat homes, that cats attach themselves to certain members of the family exclusively: “I found that no two [cats] were the ‘followers’ of the same member of my family…Why was this?…I am sorry to say I rapidly came to the conclusion that it was jealousy!” (6).  Weir describes a picturesque scene of cat jealousy in action:

Zeno [the cat] would be very cossetty, loving, lovable, and gentle, but when Lulu [the cat] came in and was nursed he retired to a corner and seized the first opportunity of vanishing through the door.  As soon as Zillah [the cat] jumped on my knee and put her paws about my neck, Lulu looked at me, then at her, then at me, walked to the fire, sat down, looked round, got up, went to the door, cried to go out, the door was opened, and–she fled. (7)

This is a scene very familiar to mulitple cat-owners today. 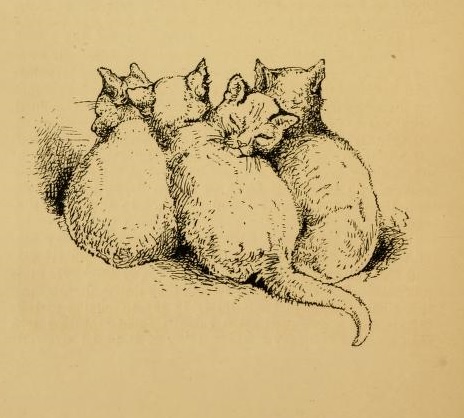 Weir was an early advocate for the humane treatment of animals, specifically cats, as he passionately said:

Among animals possibly the most perfect, and certainly the most domestic, is the Cat…Long ages of neglect, ill-treatment, and absolute cruelty, with little or no gentleness, kindness, or training, have made the Cat self-reliant; and from this emanates the marvellous powers of observation, the concentration of which has produced a state analogous to reasoning, not unmixed with timidity, caution, wildness, and a retaliative nature…

But should a new order of things arise, and it is nurtured, petted, cosseted, talked to, noticed, and trained, with mellowed firmness and tender gentleness, then in but a few generations much evil that bygone cruelty has stamped into its often wretched existence will disappear… (Preface v-vi) 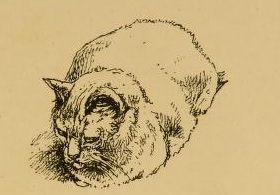 A peaceful cat, in what is sometimes referred to nowadays as “meatloaf position,” meaning the forepaws and backpaws are completely tucked under the cat’s body, the cat being rested and comfortable since it is not in a defensive stance that would allow a quick escape (5).

Weir realized that there were many cat lovers, especially in London, and so decided to hold the first cat show there at the Crystal Palace in 1871 (1-2). Weir, his brother John Jenner Weir, and the Rev. J. Macdona, were judges, and Weir said “the result [of the cat show] was a success far beyond our most sanguine expectations–so much so that I having made it a labour of love of the feline race, and acting without fee, gratuity or reward…It is to be hoped that by these shows the too often despised cat will meet with the attention and kind treatment that every dumb animal should have and ought to receive at the hands of humanity.” (2-5) 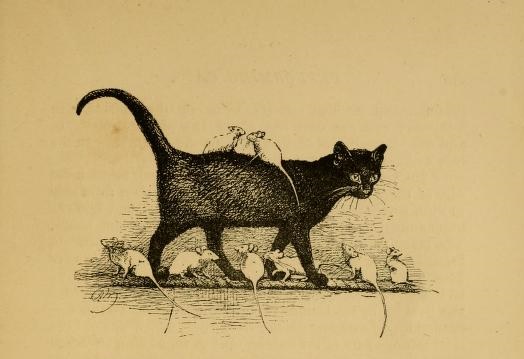 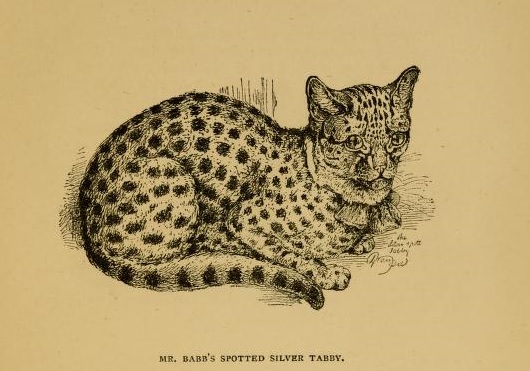 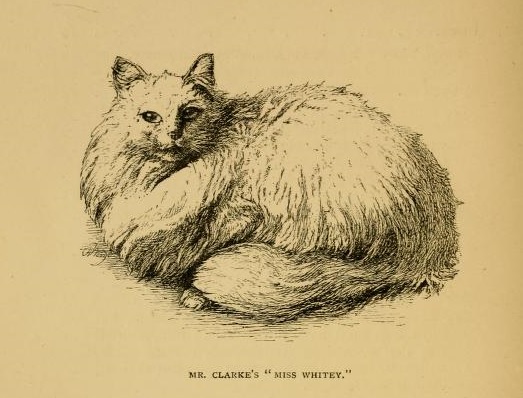 While this book is known today as the first cat pedigree book, outlining what an exemplary specimen of each breed of cat should look like and how they should behave, it is a wonderful read simply because it is filled with loving anecdotes about cats, which “are the outcome of over fifty years’ careful, thoughtful, heedful observation, much research, and not unprofitable attention to the facts and fancies of others.  From a tiny child to the present, the love of Nature has been my chief delight” (Preface v).  Take for instance, his inclusion of a story about a mother cat’s love for her kittens:

No animal is more fond and attentive than the cat; she is the most tender and gentle of nurses, watching closely every movement of her young…What can be more sensitively touching than the following anecdote, sent to The Animal World by C. E. N., in 1876?  It is a little poem of every-day life, full of deep feeling and feline love.

“I have a small tabby cat, very comely and graceful. Being very fond of her kitten, she is always uneasy if she loses sight of it if only for a short time.  For the last six weeks, the mother, failing to recall the truant back by her voice, even returns to the kitchen for the lower portion of a rabbit’s fore-leg, which has served as a plaything for some time.  With this in her mouth, she proceeds to search for her lost one, crying all the time, and, putting it down at her feet, repeats her entreaties, to which the kitten, allured by the sight of its plaything, generally responds.  Owing to its gambols in the open air during the inclement weather, the kitten was seized with an affliction of the throat; the mother, puzzled with the prostration of its offspring, brought down the rabbit’s foot to attract attention.  In vain; the kitten died.  Even now the loving mother searches for the rabbit’s foot, and brings it down.” (110-111) 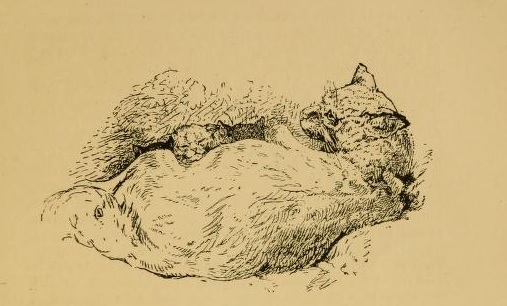 Weir includes many more heartwarming stories about the love and dedication of cats for their kittens and their human masters which are very enjoyable to read–in addition to a lengthy section of amusing “Cat Proverbs” (185-195), “Superstition and Witchcraft” as they relate to cats (195-199), “Weather Notions” as determined by cat behavior (200-201), and famous “Lovers of Cats” (223-227).  Among the “lovers of cats” Weir lists are the “Turks”–“Mahomet was very partial to Cats.  It is related, that being called up on some urgent Business, he preferred cutting off the Sleeve of his Robe, to waking the Cat, that lay upon it asleep” (223), Samuel Pepys (224), Petrach, Cardinal Wolsey, Sir I. Newton (227), Cowper, Gray, Cardinal Richelieu, and Montaigne (227).  You can read more about cat superstitions and folklore at our previous cat post.

With his many beautiful illustrations of different breeds of cats and kittens and his wonderful stories, this is truly Weir’s own “little poem of every-day life, full of deep feeling and feline love,” dedicated to the creatures which gave him such pleasure.

And now for some gratuitous photos of my own two cats, Peanut Butter and Jelly, and their fabulous and unexpected sleeping habits.  Enjoy! 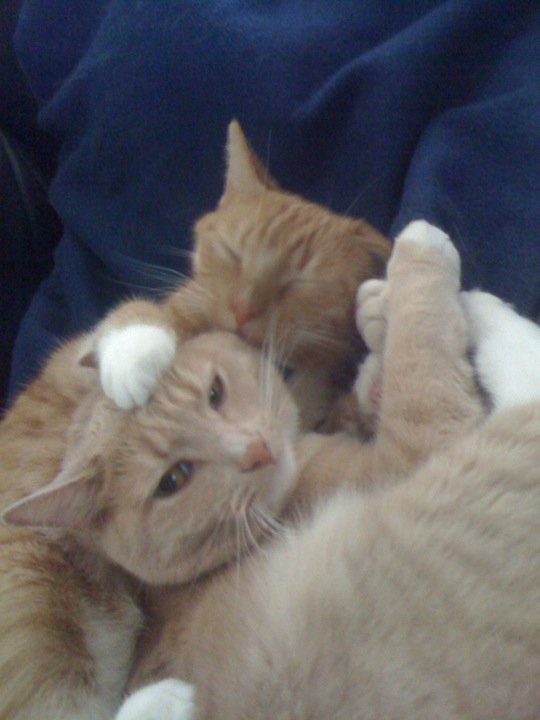 Kitten kisses!  Jelly (the orange tabby on the left) and Peanut (the buff cat on the right). 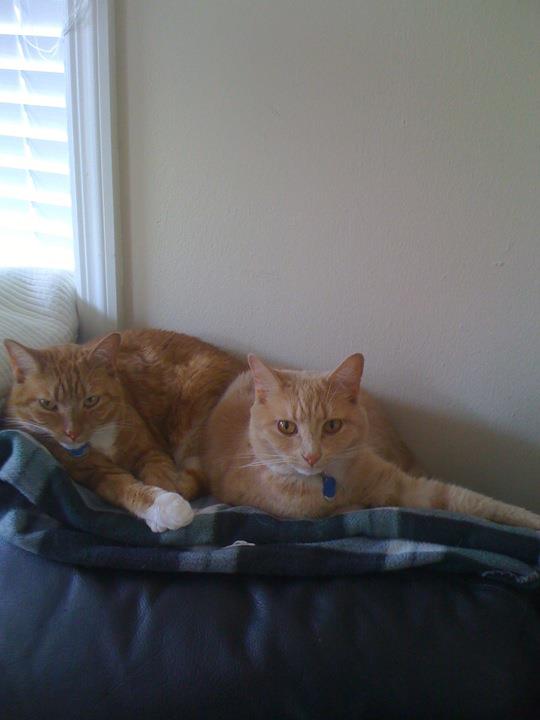 Two of a Kind. 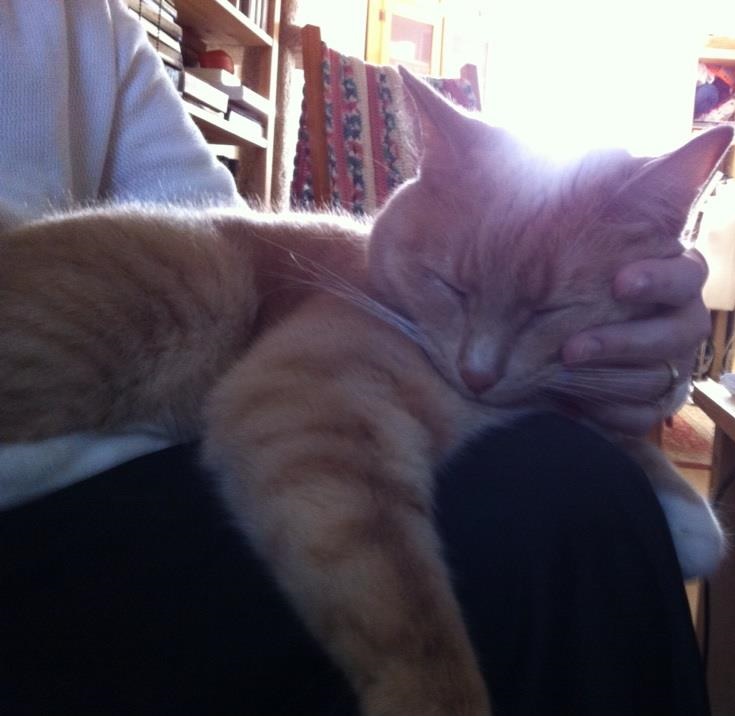 Sleepy all the time.
book of the week, cats, first cat show, Harrison Weir, kitten, mammals, national cat club, Our Cats and All About Them
July 18, 2013
Share This Post

« Previous post
How BHL Helps Users Delve into the Wonderful World of Lepidoptera!
Next post »
A Special American Insect: The Magicicada septendecim