Halloween has come and gone this year, but America’s interest in Zombies still lives on. Zombies are all the craze now on TV and in movies. You might be familiar with The Walking Dead, however there were many that came before this hit TV series including Shawn of the Dead, World War Z, 28 Days Later, Resident Evil, and 28 Weeks Later among others.

Zombies really exist in nature. Usually “zombies” in nature are the result of a parasitic relationship. This type of relationship is when one member of the pairing benefits while the other is harmed.There are an array of parasites that include viruses, fungi, protozoa, wasps, and tapeworms. Parasites have different goals when invading a host. Some simply use the host’s resources with no intention of killing them as they need the host to survive. Others hijack the nervous systems of their hosts and make them “zombies” by altering their behavior, for example, which many times results in the host’s demise.

Some interesting ones include Leucochloridium variae, commonly known as the brown-banded broodsac. This parasite invades the eyestalks of snails and make then swollen, pulsating and colorful in order to attract birds. The birds rip out the eyestalks and eat them. Then the eggs of the parasite develop in the stomach of the bird and are released in droppings. The snail can regenerate the eyestalk, but unfortunately, the new one also is infected.
The Ophiocordyceps unilateralis, infects carpenter ants by invading them through the cuticle via enzymatic activity and living in the exoskeleton. It begins to eat the ant from the inside out. As the fungus spreads through the ant’s body, it releases a compound that affects the ant’s brain and alters its behavior. This is when the ant may fall from the tree it normally lives on, climb onto a leaf and secure itself by clamping its mandible on it. Then, the ant dies. From the ant’s dorsal neck a single stalk grows and from there the fungus’ spores spread.
Euhaplorchis californiensis is a tropically transmitted parasite that thrives in salt-water marshes. Unlike the Ophiocordyceps unilateralis, which lives in one host, this clever parasite lives in three different hosts, which include Horn snails, shorebirds, and killifish. However, like the Ophiocordyceps unilateralis it also alters the behavior of the host increasing the odds of moving to the next host. The life cycle includes eggs being released in the droppings of the shorebird, then the horn snail consuming the droppings. Once the parasite enters the horn snail it becomes sterile. Once the cercariae develop in the horn snail, they swim out into the marsh and attach themselves onto the gills of a killifish. From there, they make their way into the brain and they form a layer over the brain, which causes the killifish to surface and make themselves more appealing to a shorebird, which catches and consumes them. Thus the cycle starts all over again once the parasite is in the stomach and can lay its eggs.

Unfortunately, loveable Fido and our purring kitties are not immune from parasites just because they live a domestic life. Published in 1920, the Parasites and parasitosis of the domestic animals : the zoölogy and control of the animal parasites and the pathogenesis and treatment of parasitic diseases was written by Benjamin Mott Underhill, a graduate from the University of Pennsylvania School of Veterinary Medicine and professor at the University of Pennsylvania. This book is by no means comprehensive on the subject, but is informative and represents early finds and advancements in understanding life cycles and infections afflicting both domestic animals and humans. Parasites such as lice, leeches, tapeworms, mange, ticks, bed bugs and more are covered in this book with detailed illustrations included.

Humans are not immune to parasites either. Humans can acquire parasites in several ways including ingestion through air, dust particles, as well as by food and water consumption. Other ways of transmission include skin contact including zoonotic transmission, which is by way of contact with a pet. Even mosquitoes, flies, fleas and other insects can spread parasites. There are three main classes of parasites that can cause disease in humans: protozoa, helminths and ectoparasites.

Parasites affect humans in rural areas of low-income countries as well as in developing ones. According to the Center for Disease Control and Prevention (CDC), “Cryptosporidiosis is the most frequent cause of recreational water-related disease outbreaks in the U.S., causing multiple outbreaks each year.” Cryptosporidium is a protozoan that can cause gastrointestinal illness resulting in diarrhea in humans. Luckily, humans are not at the mercy of these pesky parasites. Since the 1920s, there have been advancements in medicine and drugs have been developed to combat many parasites like the ones discussed in the blog and Underhill’s Parasites and parasitosis of the domestic animals : the zoölogy and control of the animal parasites and the pathogenesis and treatment of parasitic diseases making the domestic life better for everyone in the house.

Learn all about parasites at the Center for Disease Control and Prevention here.


Interested in parasites that prey on parasites? Listen to the Stuff to Blow Your Mind podcast The Dexter of Parasites here. 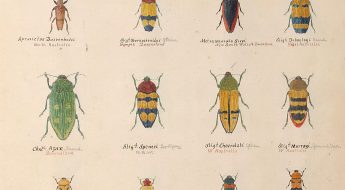