Art is an integral part of scientific investigation and documentation. Before the advent of photography, illustrations were used to capture intricate species details, habitat appearance, and even behaviors such as predation. Photography gained popularity as a visual recording method within scientific publications in the late nineteenth-early twentieth centuries, over time increasing the efficiency and accuracy by which nature could be recorded.

Scientific illustrations and photographs are an important part of the Biodiversity Heritage Library. They are highlighted via social media on Flickr and Pinterest and are the subject of recent projects, (including Flickr image tagging for Art of Life and our Zooniverse Science Gossip portal) aimed at improving access to and discoverability of these important scientific resources. A recent post even articulated how scientific images from BHL are inspiring modern art.

Scientific art may be presented either through final publications or within the pages of scientists’ field notes. The latter often serve as the basis for more formal publication illustrations or provide details upon which authors may base their written descriptions of species or environments. In many cases, they help reveal new insights into an organism’s physiology, morphology and ethology.

The Artistic Legacy of the Mother of Entomology

Maria Sibylla Merian, born on this day (April 2) in Frankfurt in 1647, is recognized as one of the most significant contributors to the field of entomology. Raised within a family of artists, Maria developed a fascination with insects, especially moths and butterflies, at an early age. By observing and sketching the silkworms that fed on the mulberry in her yard, she discovered that the silkworms turned into moths. She soon expanded her investigations to include as many caterpillars as she could, realizing that each of them metamorphisized into various butterflies and moths.

At the age of 28, Maria published her first book of botanical illustrations in 1675, entitled Neues Blumenbuch. In 1699, she was awarded a grant by the then-governor of the Dutch colony of Suriname to travel with her daughter, Dorothea, to South America to explore and illustrate local animals and plants. She spent two years traveling around Suriname, including what later became known as the French, Dutch and British Guianas, illustrating wildlife with particular attention to capturing insect metamorphosis. In 1705 she published her work in Metamorphosis Insectorum Surinamensium with 60 plates depicting the full life cycle of many Suriname insects.

Maria’s illustrations were important and revolutionary for a number of reasons. The observations and evidence they displayed helped overturn the prevailing theory of the time that insects spontaneously generated from mud. Additionally, Maria drew her subjects from life in their natural environments. Most naturalists of the day illustrated species from dead, preserved specimens, which contributed to a lack of knowledge about the true life cycle and origin of insects. Finally, Maria also portrayed the host plant for the species she studied and even illustrated the damage the insects left on the plants.

Sadly, Maria’s Suriname expedition was cut short by an illness that forced her to return to the Dutch Republic. In 1715 she suffered a stroke which left her partially paralyzed and affected her ability to work. She died two years later in 1717 and was listed in a local registry as a pauper.

While Maria’s sex and lack of formal education resulted in her work largely fading into obscurity for many centuries after her death, she was rediscovered in the twentieth century, and today we properly recognize her significant contributions to science and how art enabled her to reveal new truths about the natural world. You can learn more about Maria in our Early Women in Science exhibit.

A Picture’s Worth a Thousand Words (or field entries…)

Silberglied was educated at Cornell University and Harvard University, and he began his professional career upon his appointment in 1973 as Assistant Professor of Biology at Harvard University and Assistant Curator of Lepidoptera at the Museum of Comparative Zoology (MCZ). In 1976, he accepted an additional appointment as a biologist at the Smithsonian Tropical Research Institute (STRI), spending half the year in Cambridge and the other half in the American tropics.

Silberglied’s work was chiefly focused on Lepidoptera, and he was especially interested in insect vision, ultraviolet reflectance in butterflies, and courtship, mating and reproductive behavior. As a previous post by Emily Hunter from The Field Book Project describes, photography was an integral part of Silberglied’s investigations into these topics. He used photographs to capture transient butterfly behaviors such as courtship displays, which allowed him to study the activities in more detail. But perhaps more revolutionary than this, he used photography to “see what a butterfly sees.”

Butterflies are able to see ultraviolet patterns invisible to the human eye. These patterns, as Emily Hunter describes, “assist butterflies with camouflage, finding nectar in a flower, communicating, and attracting a mate.” A small field book from 1972, Costa Rica, describes Silberglied’s methodology for capturing these UV patterns, which included two 35mm lenses attached to 16mm motion picture cameras (one recording color film, the other recording UV). This technique allowed Silberglied to “translat[e] the invisible UV patterns to human visible images.” Learn more in Silberglied’s article about the subject. Silberglied’s field materials include a host of photographs capturing minute details, including a fascinating picture of butterfly wing patterns.

Sadly, Robert E. Silberglied was killed in 1982 (at the age of 36) in the Air Florida plane crash. His use of an artistic medium to uncover knowledge about butterflies was revolutionary and inspirational. As Ms. Hunter ponders, “who knows what he would have accomplished today with the abundance of new imaging technologies, as well as advances in sound recording, molecular techniques, and sophisticated methods of tracking individual butterflies.”

You can view Robert E. Silberglied’s field notes in BHL, digitized by The Field Book Project. 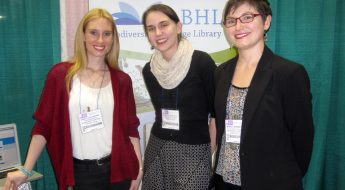 « Previous post
No Flippant Matter: The Re-Invention of the Flipper and Why Ceatacean Flippers Are Unique
Next post »
2015 Annual Members Meeting at The Field Museum