In 1492, Christopher Columbus sailed out from Spain with a mission to find a western trade route to Asia. Instead, he found a whole “New World”…and something altogether more mysterious.

On January 9, 1493, near the Dominican Republic, Columbus spotted three “mermaids.” How did he describe them? “They are not as beautiful as they are painted, since in some ways they have a face like a man” (History.com).

The myth of a marine human extends as far back as 5,000 BCE, when the Babylonians worshipped a fish-tailed god named Oannes. John Ashton, author of Curious Creatures in Zoology, proposes that this is the first depiction of a merman. Also in classical antiquity, the goddess Atargatis, chief goddess of northern Syria, was depicted as a fish-bodied human, thus constituting the first known representation of a mermaid.

By the Common Era, mermen and mermaids had made their way into the accepted zoological canon. Pliny the Elder, who lived in the first century CE and had quite a lot to contribute to the discussion of mythical beasts, asserted that mermaids were real. According to Philemon Hollands’s 1601 translation (1634 edition in BHL), Pliny stated,

“And as for the Mermaids called Nereides, it is no fabulous tale that goeth of them: for looke how painters draw them, so they are indeed: only their body is rough and scaled all over, even in those parts where they resemble a woman.”

In the centuries that followed, many people claimed to actually see mermaids. In 1608, during an expedition to discover the Northwest Passage, Henry Hudson claimed that several crewmembers spotted a mermaid. From the naval upwards, she was like a woman, with long, black hair, but she had a tail like a porpoise.

By the eighteenth century, many believed that mermaids inhabited the seas surrounding the Dutch East Indies. The official painter of the Dutch East India Company, Samuel Fallours, included a tantalizing mermaid within his 1718 drawing depicting the assortment of exotic biodiversity found around the islands. Francois Valentijn included a copy of Fallours’ mermaid in his publication on the East Indies, entitled Natural History of Amboina (1727). He claims that this “monster resembling a siren” was captured on the coast of Borneo.

Valentijn’s “monster” title alludes to the fact that merpeople were not always represented in a sensual light. Sometimes, they were just plain monsters. Within the 13th century Norwegian manuscript Konungs skuggsjá (linked: English translation by Laurence Larson), we read of the merman:

“The monster is tall and of great size and rises straight out of the water…It has shoulders like a man but no hands…No one has ever observed it closely enough to determine whether its body has scales like a fish or skin like a man. Whenever the monster has shown itself, men have always been sure that a storm would follow.”

And of course, we can’t omit Conrad Gessner from our discussion. His 16th century book Historia Animalium depicts the Sea Satyr, also calling it a sea demon. According to John Ashton, Gessner “tries to pass it off as a veritable merman.” Gessner also claims that, on November 3, 1523, a man-fish, about the size of a five year old boy, was seen at Rome.

Two other curious, merman-esque monsters include the Monk and Bishop Fish. Gessner, and later others including Guillaume Rondelet, Ulisse Aldrovandi, and Gaspar Schott, portray these beasts, claiming that a Monk-fish was caught off Norway, in a troubled sea, and that the Bishop-fish was seen off the coast of Poland in 1531. Despite such observational reports, these monsters were likely a commentary on the religious tension of the day, resulting in an association between cleric figures and monsters.

If an exploration of historic monsters has taught us anything, it’s that most were not fabricated out of pure myth. Usually, they proceed from an attempt to categorize an unknown animal sighting.

Bernard Heuvelmans, considered the father of cryptozoology, studied the process by which unknown animals become monsters and monsters are identified as known animals. Of this transformation, he wrote, “The mythifying process can sometimes be carried to the point of altering its object beyond recognition” (Heuvelmans, 1990).

Case in point: The Manatee.

“Since the manatee has pectoral mammae…and a body that tapers to a fishlike tail, it has always been identified, on both side of the Atlantic, with the fascinating mermaid, despite its (to our eyes) ugly face…” (Heuvelmans, 1990)

The three mermaids that Columbus spotted in 1493 (or sirens as he called them), were undoubtedly manatees. He, and many explorers after him, determined that these aquatic mammals were mermaids in flesh and blood. Sightings of dugongs, a member of the manatee’s order, have also been associated with mermaids throughout history. Indeed, the order containing manatees and dugongs to this day is called “Sirenia.”

Manatees aren’t the only animals that have played the part of a mermaid. In the thirteenth century, a fisherman in Lake Constance, outside Bregenz, Austria, found a mermaid (Shadows in the Sea, 1963). He heard a voice call to him from the sea, saying, “Take my daughter and hang her in the Arch of Martinster. She is begat of a land woman and is of no use here.” He followed the voice’s command and hung the mermaid in the archway, after which it died in a contorted shape. The true identity of the creature? A shark, possibly a Porbeagle. The original mummified shark was replaced with a stone replica so that it could always stand guard over the city.

Of course, mistaking a manatee or a shark for a mermaid with breasts and flowing locks, which so many sailors vehemently claimed to have seen, seems impossible. It’s clear that some good old exaggeration (and blatant lies) contributed to the mermaid myth.

The lies associated with the mermaid’s history are more tangible than exaggerating manatees as beautiful women. “Unlike most other monsters, which, almost by definition are very large” explains Richard Ellis in his book Monsters of the Sea, “’mermaids’ are small enough to tempt people to manufacture them.” (pg. 80). And that’s exactly what they did.

“Monkey” Mermaids made their way into western mermaid lore in the nineteenth century. Apparently manufactured in Japan, these twisted mermaid interpretations were created by combining a small monkey’s head and torso with a dehydrated fish. In the 1840s, P.T. Barnum made a fortune by exhibiting what he claimed, and successfully convinced many people, were the remains of a mermaid. Today it is famously known as the Feejee Mermaid.

Over time the Jenny Haniver also came to be associated with mermaids. The first known illustration of a Jenny Haniver appears in Gessner’s Historia Animalium in the mid-1500s.

What exactly are these disturbing specimens? They are mutilated elasmobranchs – either a ray, skate, or guitarfish. The fins are cut so that they resemble wings, a string is tied around the “neck” area to give it a human appearance, and the tail is twisted into a suitable mermaid-esque form. The charade is then allowed to dry in the sun and varnished for preservation.

In the mid-1600s, Ulisse Aldrovandi published what he called a basilisk but which was created in the same fashion as Gessner’s Jenny Haniver. He includes a caption with his illustrations reading “basilicus ex raia,” indicating his awareness of the illegitimacy of the monster. Both Gessner and Aldrovandi classify these strange beasts as rays, but provide no further information.

Of course, by Gessner and Aldrovandi’s time, the term Jenny Haniver was not yet in use. The name does not appear in published form until 1928, when Gilbert Whitley wrote about these monsters in an Australian Museum Magazine article. The origin of the name is unknown, though it has been suggested that it is a derivative of ‘Anvers,’ the French name for Antwerp and a possible place of origin for the deception.

The Case for the Mermaid

So, does the mermaid exist? Obviously not in the form of a half man or woman, half fish, but, to quote Dr. Ellis in Monsters of the Sea, “The sirens are still with us, however, in the form of the manatees and dugongs. They may not have the sex appeal of their namesake, and they certainly are not as beautiful as the mermaid, but they differ from their historic and literary ancestors in one irrefutable respect: they exist.” (pg. 98). 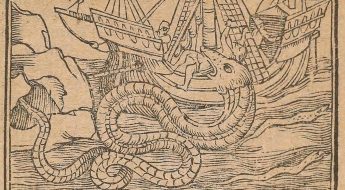 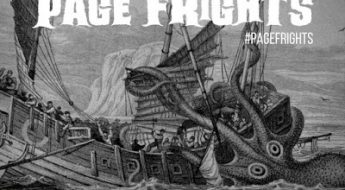 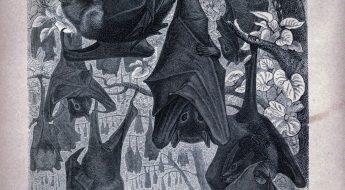 « Previous post
Crowdsourcing and BHL: Current Projects that Allow Users to Help Us Improve Our Library!
Next post »
The Octopus…The Monster that Isn’t