Celebrating President’s Day with a Look at Presidential Pets

It’s President’s Day (recognized as Washington’s Birthday – the event for which this holiday was originally established – on the federal calendar) in the United States. We decided to commemorate the day with a look at the varied and sometimes remarkable biodiversity that has graced the White House since our first president in 1789. There are of course the usual suspects – dogs, cats and birds – and some not as readily available in your local pet store, including tigers, elephants, and pygmy hippos!

By far the most popular type of animal owned by presidents over the years is the dog. Thirty-one of our forty-four presidents owned dogs, breeds of which include Terriers, Labradors, Spaniels, Irish Setters, Collies, Eskimo Dogs, and less-usual breeds like Weimaraners, Mastiffs, Wolfhounds, and Airedales. President Obama’s dogs, Sunny and Bo, both Portuguese Water Dogs, are the current pets-in-residence at the White House.

Significantly less popular among presidential pets are cats (to the chagrin of many a librarian!); only twelve of our Presidents owned them. These cat lovers included Lincoln, Hayes, Theodore Roosevelt, Coolidge, Kennedy, Ford, Carter, Clinton, and George W. Bush. President Hayes, who held office 1877-1881, owned the first Siamese kitten to reach America.

Not all of our presidents preferred four-legged companions. Feathery friends are also popular in Office – more popular, in fact, than cats! Nineteen of our past presidents have owned birds. Some presidents even owned exotic varieties, including a Hyacinth Macaw and Barn Owl (Theodore Roosevelt) and a Bald Eagle (Buchanan). Farmyard-associated Aves have also seen White House time, including a turkey during Lincoln’s tenure and roosters during Theodore Roosevelt’s presidency.

It should not surprise you that a popular presidential pet was the horse. Up until the early 1900s, when the automobile became king, it was commonplace for influential citizens to own horses. Though President Washington owned many horses, his successor, John Adams, actually built the first White House stables. The most recent president to own a horse was John F. Kennedy, whose daughter Caroline’s pony, Macaroni, roamed freely around the White House grounds and was something of an American celebrity. Kennedy’s wife, Jacqueline, also owned a horse named Sardar.

The horse isn’t the only species commonly found on a farm that, at times, has also been a resident at the White House. Many presidents owned cattle, including William Henry Harrison, who kept a Durham variety at the White House, and Rutherford Hayes, who owned pedigreed Jersey Cows. While Taft was the last president to keep a cow at the White House (his cow Pauline provided him with milk during his 1909-1913 presidency), George W. Bush owns a female longhorn named Ofelia, which they keep at the family ranch in Texas. Goats were also popular among Presidents, with both Harrisons, Lincoln, and Hayes claiming them at pets. And let us not forget the Democratic-icon, the donkey! President Coolidge had one named Ebenezer during his 1923-1929 tenure.

Some Presidents preferred much smaller pets. For example, Coolidge and Theodore Roosevelt had raccoons, while Kennedy and Lyndon B. Johnson owned hamsters. Theodore Roosevelt was also one of only three presidents to own reptiles as pets: he owned snakes and a lizard named Bill. Our favorite small pet story, however, is associated with Andrew Johnson, who left flour on his doorstep at night to feed the local mice population during his impeachment.

A Walk on the Wild Side

Though it has been over 80 year since anything more exotic than a lovebird called the White House home, some of our former presidents certainly had a flare for the unusual when it came to pets. For example, John Quincy Adams and Herbert Hoover owned the only other reptile pets claimed by presidents – Alligators! Adams’ was given to him by the Marquis de Lafayette, and Hoover’s son owned a pair that occasionally wandered around the White House lawn.

Not impressed by an alligator? Well, Martin van Buren received a pair of tiger cubs from the Sultan of Oman. Congress strongly requested the animals be given to the local zoo.

And if you think your pet eats a lot, consider owning something that eats up to 660 pounds of food a day! James Buchanan received a herd of elephants from the King of Siam (he wisely donated them to the zoo).

However, when it comes to the extreme in pet-owning, Coolidge and Theodore Roosevelt take the cake. Among his dogs, cats, birds, donkey, and raccoon, Calvin Coolidge also owned a bobcat, lion cubs, a wallaby, a bear, and even a pygmy hippo! Theodore Roosevelt, whom we featured not long ago in regards to his outspoken love for nature, owned not only the typical dogs, cats, birds, and even horses, but also a badger, lion, hyena, wildcat, coyote, bear, and zebra.

Outcasts from the Pet Bandwagon

Think every president owned a pet? Think again! James K. Polk (1845-49) left no record of ever owning any pets.

Our Presidents have certainly owned some remarkable species throughout the years. Check out illustrations of the presidential varieties in our BHL Flickr.

We hope you enjoyed this post. Interested in guest-blogging for BHL? We’d love that! Natural history, biodiversity and conservation topics are especially welcomed. Email us your ideas at 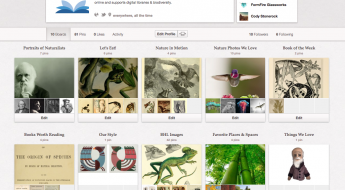