The Pennsylvania Horticultural Society (PHS) is a nonprofit organization based in Philadelphia, Pennsylvania, that offers a variety of gardening programs and activities to its members as well as the surrounding city and state. Its annual Philadelphia Flower Show is the largest and longest-running event of its kind, attracting florists, gardeners, and landscape designers from all over the world. The PHS has also produced many publications over the years, some of which are now available in BHL through the IMLS grant Expanding Access to Biodiversity Literature (EABL).

History of the PHS

Founded in 1827 with 80 members, the PHS provided a forum for serious growers interested in horticulture and its various applications, commercial and academic. At monthly meetings, members exhibited rare or unusual plants, discussed innovations in horticulture, tasted wine, and distributed among themselves cuttings and grafts of plants from all over the U.S. The PHS began a small library in 1828, and the following year held its first annual Philadelphia Flower Show.
Over the next several decades, many prominent seedsmen–some of them PHS members–exhibited at the Philadelphia Flower Show, including Henry Dreer, Robert Buist, Josiah Coates, and David Landreth. These men owned successful nurseries, and many of their catalogs can be found in BHL’s Seed & Nursery Catalogs collection.
By 1842, the PHS library contained 450 volumes. It was expanded, and a librarian hired at a salary of $50 per year. By 1850, the library had doubled in size, becoming one of the largest horticultural collections in the country. In 1854, it narrowly avoided destruction in a fire that claimed the Philadelphia Museum.
Around this time, the PHS began making recommendation to the Philadelphia City Council on which trees to eliminate and which to cultivate in public parks. This marked the beginning of PHS’s longstanding efforts to bring gardening to urban spaces, efforts which continued in the decade preceding the Civil War, despite a decline in the Society’s membership and finances.
While its finances were still precarious after the Civil War, the PHS enjoyed increased membership, and in 1867 built its first Horticultural Hall. The more famous Horticultural Hall was built in Fairmount Park for the Centennial Exposition of 1876; PHS members actively contributed to the planning and execution of the Centennial, and the event afforded its members the opportunity to display their fruits and flowers. After the Centennial, PHS held its annual flower show in the new hall. The original hall was damaged in a fire in early 1881 and rebuilt later that year; it was completely destroyed by a second fire in 1893. A third hall was built in 1896, which was sold in 1917 in a time of financial hardship.

The 20th century saw the PHS shift to a predominantly amateur membership, which continued to grow with each passing decade. During World War 2, its members were involved in the movement to plant “victory gardens” which could sustain families during a time of scarcity. Writing in the 1945 Yearbook of the Pennsylvania Horticultural Society, the Report of the President for the previous year asserted:

I feel we should all take pride in the condition of the Society, especially in the face of the changing economic conditions that have been brought about by the war. A planned economy, with all of its regimentation, has been forced upon us for the duration of the Second World War, and the end is not yet. Our important duty has been to keep alive human interest in the work of our Creator as we find it in plant life, which is the very sustenance of our existence. Horticulture, in truth, is refined from agriculture to fit the home and becomes the basis of its economy, from which our community and national economy and life are but mammoth developments.

By the second half of the 20th century, the amateur-oriented activities of the PHS were clearly reflected in its publications, such as a members’ newsletter that offered gardening tips, brief articles, and book recommendations. Meanwhile, the Philadelphia Flower Show continued to grow in size and prominence.

Currently, the PHS boasts a membership of 27,000. The Philadelphia Flower Show continues to be a major event every year, and in keeping with its early activities, the PHS remains heavily involved in creating civic landscapes, improving public parks, and planting community gardens in Philadelphia.

The PHS McLean Library contains 15,000 volumes and is working to digitize many historic, public domain horticultural works as well as PHS publications. It has given BHL permission to add many of these to its own collection (where they will appear soon!), including:

Janet Evans, Associate Director of the McLean Library, says, “We made a commitment…to contribute to digitization of horticultural material. I think it’s particularly important in horticulture, because so many of the older serials have never been well indexed, and yet they contain information that is of value to researchers today – historians, biographers, academics in the humanities as well as horticulturists.”

We are grateful to the PHS for their commitment to open access and their efforts to promote horticulture in Pennsylvania and across the world! 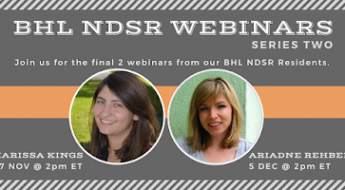