We officially passed the halfway point in our residencies in June and have begun to work on compiling our research into a final report. We are excited to bring you some project updates and report on our conference presentations. 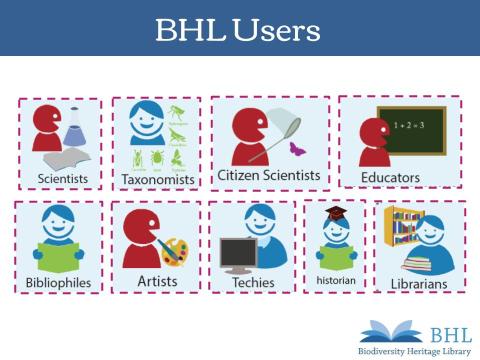 For her NDSR project at Smithsonian Libraries, Pam will be gathering feedback from the users of BHL to help inform the next version of the digital library. She’s had the opportunity to meet with several partners of BHL and sit in on BHL Member, Collection, and Tech Team meetings. Through these interactions, she has been able to learn more about the BHL users and will be developing surveys and interviews to gather feedback directly from the users. Moving forward, BHL looks to enhance current features and implement new features that will enrich the user experience, providing additional insight into the world’s knowledge of biodiversity. Investigating user needs with BHL may also prove useful in identifying user behaviors and preferences that would be applicable for other digital libraries as well.

Last week, Ariadne joined the CoderGirl UX (User Experience) Summer 2017 Cohort. CoderGirl is a technology training program and community for women in St. Louis that is part of the LaunchCode Education initiative. Participation is free; mentors working in the field offer their time to teach on a volunteer basis. The UX track is a 6 month program designed to grow skills in UX research and design in a supportive, creative, and diverse environment. The track centers around the development of a project that will serve as a UX portfolio.

Beyond this, Ariadne is focusing on interviewing BHL Flickr taggers and Science Gossip members to understand the successes and challenges of these programs and the motivations and backgrounds of participants. Most importantly, Ariadne hopes to convey their  perspectives as she makes recommendations for improving access to natural history illustrations and BHL’s future crowdsourcing/citizen science initiatives.

Marissa has been working with several summer interns at NHMLAC to create and edit metadata for the museum’s publication Contributions in Science. This process has involved much fine-tuning, but establishing a clear workflow is important as the museum hopes to contribute more of its in-house publications to BHL in the future!

This project is also timely as the museum’s invertebrate paleontology department is in the process of digitizing some of their thousands of specimens and specimen records, and Marissa has been in contact with them to see how we can possibly connect the digitized specimen information with their occurrences in biodiversity literature.

In May, Katie participated in WikiCite 2017, a conference, summit, and hackathon event organized for members of the Wikimedia community to discuss ideas and projects surrounding the concept of adding structured bibliographic metadata to Wikidata to improve the quality of references in the Wikimedia universe. Generating Linked Open Data citations has the potential to connect objects and concepts with information resources to create context for more accurate and interesting digital representations of knowledge and cultural heritage. And more complete and complex graphs are better at supporting deeper investigations, queries, and visualizations of these data across repositories, collections, and knowledge bases.

One way that GLAMs can begin to integrate their catalog records with Wikidata (and therefore across Wikimedia projects and other repositories across the web that are connected to Wikidata), is by using its power for reconciling messy data. One of the biggest problems with BHL bibliographic metadata is that it comes from lots of different libraries and museums and is often as old and outdated as the content it describes.

For example: BHL attaches Creator IDs to Author names, which is useful for identification and connecting titles and items to their Authors, but they are assigned automatically according to the character strings imported from specific fields in a library catalog’s MARC record. Despite (and perhaps because of) the use of authority files to control Author name strings in catalog records, different libraries have contributed items by the same author whose names are are spelled, punctuated, and identified differently. The process of finding all of the different spellings of author names and colocating them under a single unique identifier is called “reconciling”, and BHL does not do it, choosing instead to focus on improving access to items based on content rather than metadata. Fortunately, there are several different ways to go about reconciling data, and one of them is crowdsourcing.

BHL can use Wikidata by adding a property for a BHL Creator ID in Wikidata (P4081) and adding a table in BHL for Wikidata IDs that can be associated with those same Creator IDs. By adding BHL IDs to Wikidata, it becomes a more robust knowledge base that will improve the discoverability of BHL’s content by enriching its metadata externally and solving some metadata problems internally.

Subscribe to the BHL NDSR blog for an upcoming post that will describe this process in more detail. 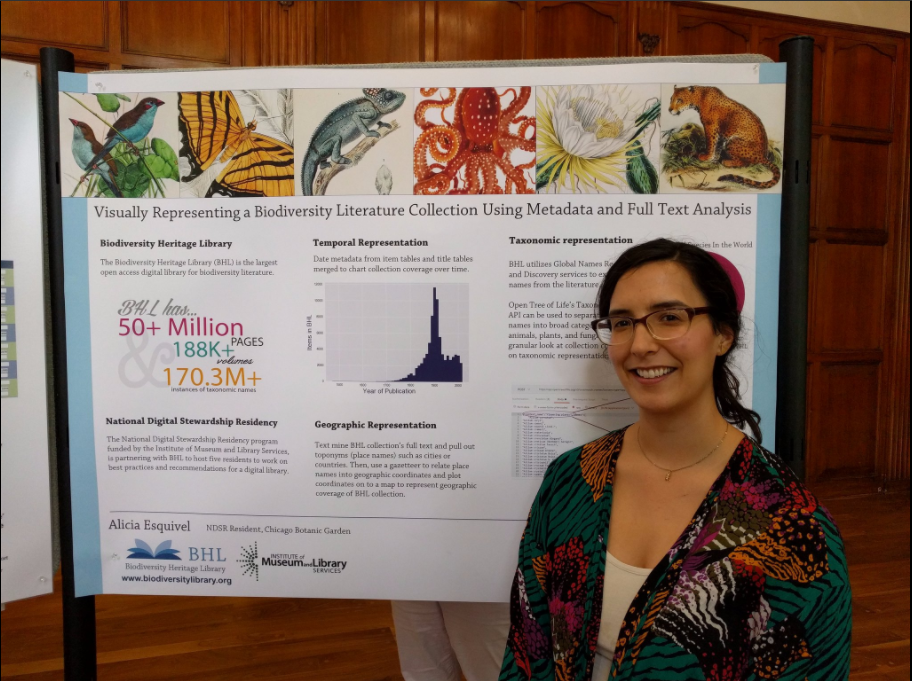 The presentations, posters, and workshops highlighted research trends in biodiversity and projects that have open access missions similar to BHL’s. She was able to give a talk about using statistical analysis to calculate the size of biodiversity literature (using capture-mark-recapture) and present a poster about visually representing the collection at BHL.

And in June, we represented BHL and NDSR at the ALA Annual Conference in Chicago. The conference, hosted by the American Library Association, was held to discuss, learn, and exchange ideas about libraries on the theme “Transforming Our Libraries, Ourselves.” With 25,000 attendees, masses of sessions and talks, and a mountain of freebies, ALA can be an overwhelming experience — we managed to find our way and learned about different library projects and trends from around the country.

One of our main goals was to present our “Halfway Remarks” poster on behalf of all of the BHL NDSR Residents. Alicia Esquivel of the Chicago Botanic Garden and Ariadne Rehbein of the Missouri Botanical Garden attended and presented. 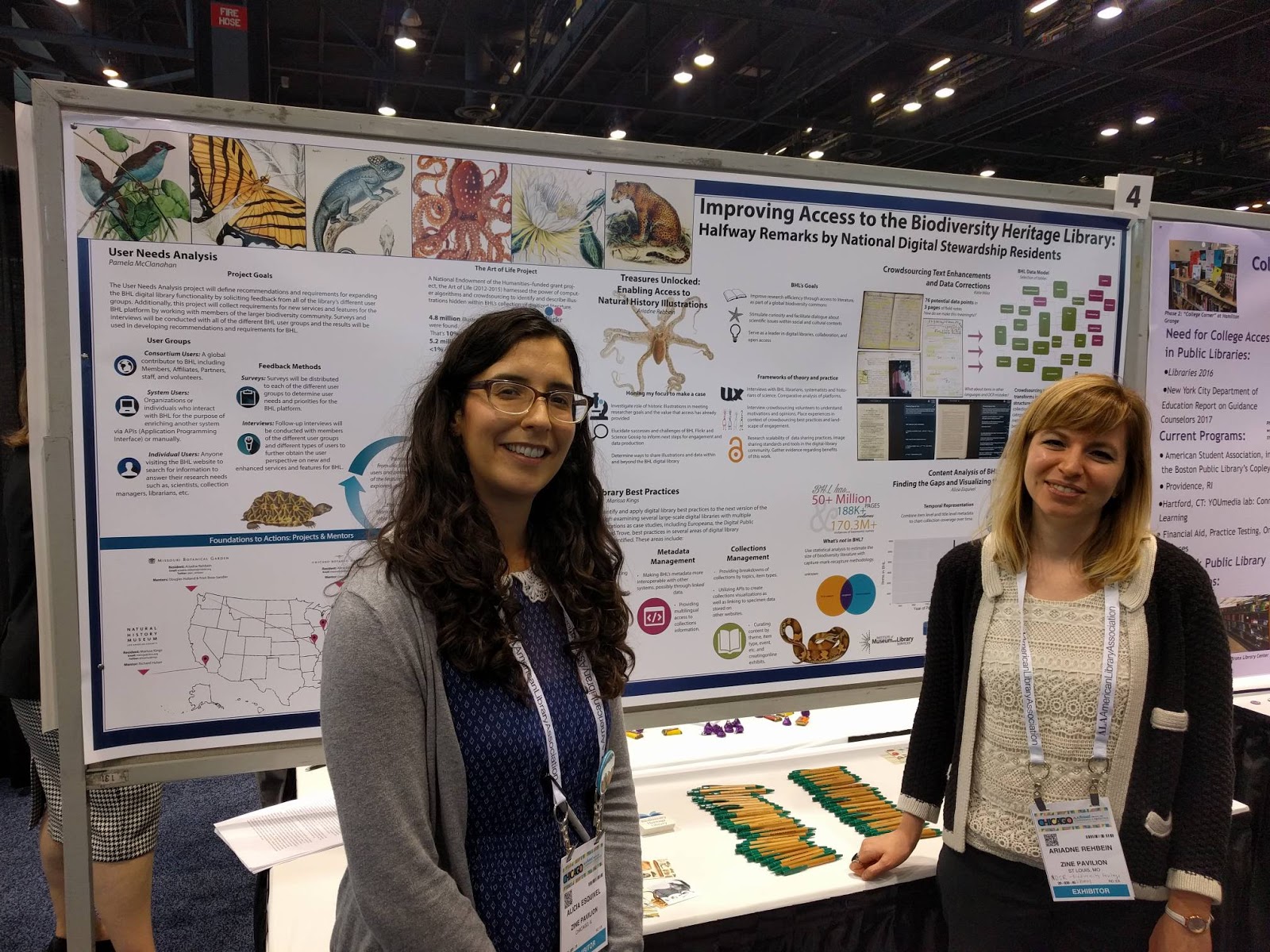 All of us Residents are thankful for the opportunities we have had to attend and present at conferences during the first half of our residencies. Our next professional meeting will be the BHL tech meeting in September where all of the Residents and Mentors will join the BHL Technical Team in St. Louis to discuss our findings of best practices and recommendations for BHL.

An Update from NDSR Residents 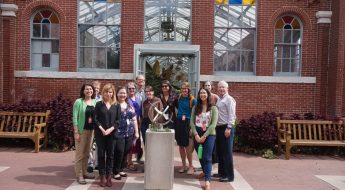