As it turns out, ambling along the beach, collecting shells, and observing tidepool life are not the ageless pastimes one might assume. It was not until the mid-19th century that these practices became widespread (at least in England and the United States). This surge in popularity was largely the result of the works of Philip Henry Gosse, particularly in his 1853 work, A Naturalist’s Rambles on the Devonshire Coast.

Philip Henry Gosse was a talented naturalist and gifted illustrator. He corresponded with Charles Darwin, and was a best-selling author. As a young man, he travelled in Canada, the United States, and Jamaica, where he collected, drew, and wrote about many of the organisms he encountered, including insects, birds, amphibians, and reptiles. When he returned to his native England, he devoted himself to studying, sketching, and describing the shore-dwelling creatures he observed hear his home in South Devon. His books about the local sea stars, anemones, crustaceans, and their ilk made Gosse famous, and they made England sit up and notice the vast array of sea life crawling on her shores.

Gosse was disappointed with the quality of the lithographs in A Naturalist’s Rambles, but even so, their level of detail and realism is astounding. In the introduction, Gosse implores his readers to be more than “idle pleasure-seekers” at the beach, and to observe that “[m]ost curious and interesting animals are dwelling within a few yards of your feet.” In fact, these seashore creatures were so unknown to most people at the time that Gosse’s critics accused him of inventing them to sell more books.

A Naturalist’s Rambles is a fascinating work in that Gosse managed to skillfully combine his precise, scientific observations with engaging narratives about animals in the wild, their habits, and his practice of collecting subjects for further study in his home aquarium. He also includes prayers, poetry, and an interesting epitaph he found during his rambles. Gosse’s book was so inspiring that it prompted crazes for seashore collecting and home aquarium-keeping, which he further discussed in his book The Aquarium: An Unveiling of the Wonders of the Deep Sea.

Later in life, Gosse felt personally responsible for the destruction visited upon his nation’s beaches by unscrupulous home aquarists and shell-hunters. One need only read his books to experience the wonder and reverence he felt for his native shores and the diversity of the creatures he found there.

This week’s book of the week, A Naturalist’s Rambles on the Devonshire Coast by Philip Henry Gosse (1853), was contributed by the Marine Biological Laboratory, Woods Hole Oceanographic Institution Library.

Book of the Week: Welcome to the Orchid Family, Bulbophyllum nocturnum! 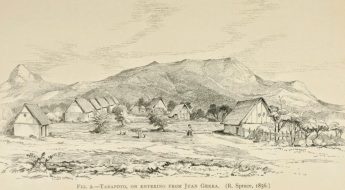