If you were asked who Henry David Thoreau is, chances are you’d have a least a general idea along the lines of an author who wrote, among other things, works centered around natural history themes. If we ask you who John Burroughs is, however, would you be able to confidently respond? The fact is, John Burroughs is recognized as “the most important practitioner after Thoreau of that especially American literary genre, the nature essay.” Given the nickname “The Grand Old Man of Nature,” Burroughs was a “virtual cultural institution” of the American Conservation Movement by the turn of the century. He authored many natural history titles that his biographer Edward Renehan described as the works of “a literary naturalist with a duty to record his own unique perceptions of the natural world.” However, though his style perfectly harmonized with the cultural movement occurring during the time of his career, he has become relatively obscure in our present day.

Though Burroughs was first published in 1860, he worked as a clerk and federal bank examiner, writing only on the side, until the 1880s. It was not until 1871 that, encouraged by friend Walt Whitman, Burroughs published his first nature-oriented work entitled Wake-Robin. In 1874, Burroughs purchased a 9-acre farm in New York, where he grew many crops, including fancy table grapes, while he continued to write and work as a bank examiner. In 1895, he built a cabin near Riverby, where he grew celery and entertained visitors.

Burroughs wrote many popular nature works about such locales as the Catskills, Peekamoose Mountain, Mill Brook Ridge, and the Delaware River. He was very active in the debates of the “Nature Fakers Controversy,” which “highlighted the conflict between science and sentiment in popular nature writing.” A new style of nature writing took hold in the late nineteenth century in which “the natural world was depicted in a compassionate rather than realistic light.” Burroughs was against “fantastical representations of wildlife,” and published an article in 1903 entitled “Real and Sham Natural History” to express his views.

This week, we feature a book by John Burroughs all about squirrels and other “fur-bearers.” Descriptively named Squirrels and Other Fur-Bearers (1900), this works contains fifteen illustrations completed after Audubon. Besides squirrels, it features chipmunks, skunks, raccoons, porcupines, and more. We selected some of our favorite illustrations from the book and included anecdotes from Burroughs about the species. You can see all of the illustrations from our Book of the Week on our Flickr account, and be sure to check out the book in BHL to learn more about the critters, including an enigmatic chapter entitled “A Life of Fear.” 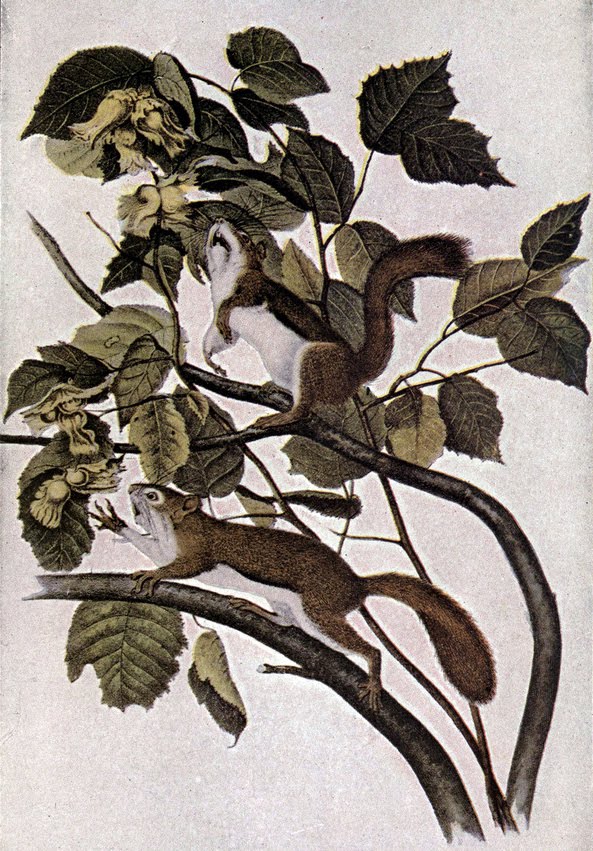 Red Squirrel: “The red Squirrel is more common and less dignified than the gray, and oftener guilty of petty larceny about the barns and grain-fields…At home, in the woods, he is very frolicsome and loquacious. The appearance of anything unusual, if, after contemplating it a moment, he concludes it not dangerous, excites his unbounded mirth and ridicule, and he snickers and chatters, hardly able to contain himself…There is something very human in this apparent mirth and mockery of the squirrels. It seems to be a sort of ironical laughter, and implies self-conscious pride and exultation in the laughter. ‘What a ridiculous things you are, to be sure!’ he seems to say; ‘how clumsy and awkward, and what a poor show for a tail! Look at me, look at me!’ – and he capers about in his best style.” 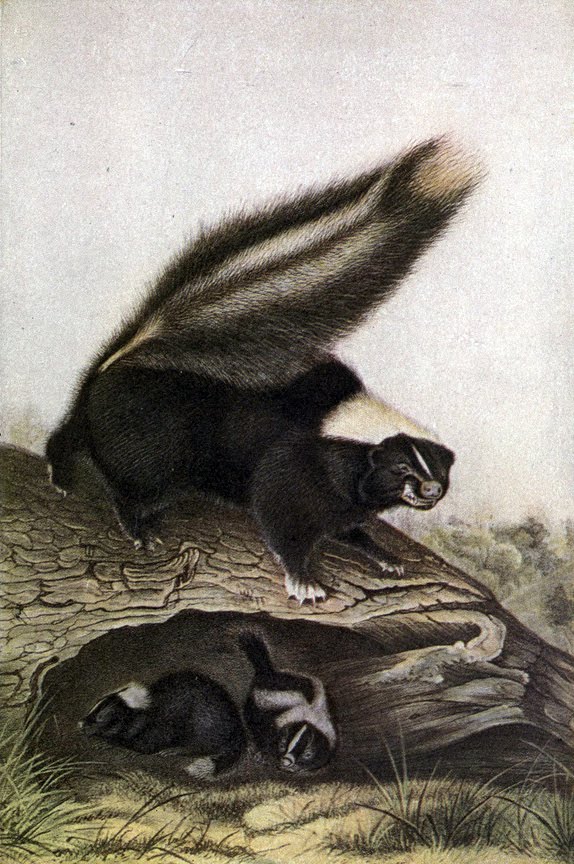 Skunk: “The secretion upon which he relies for defense, and which is the chief source of his unpopularity, while it affords good reasons against cultivating him as a pet, and mars his attractiveness as game, is by no means the greatest indignity that can be offered to a nose. It is a rank, living smell, and has none of the sickening qualities of disease or putrefaction. Indeed, I think a good smeller will enjoy its most refined intensity. It approaches the sublime, and makes the nose tingle. It is tonic and bracing, and, I can readily believe, has rare medicinal qualities. I do not recommend its use as eye-water, though an old farmer assures me it has undoubted virtues when thus applied. Hearing, one night, a disturbance among his hens, he rushed out to catch the thief, when Sir Mephitis…discharged the vials of his wrath full in the farmer’s face, and with such admirable effect that, for a few moments, he was completely blinded…But he declared that afterwards his eyes felt as if purged by fire, and his sight was much clearer.” 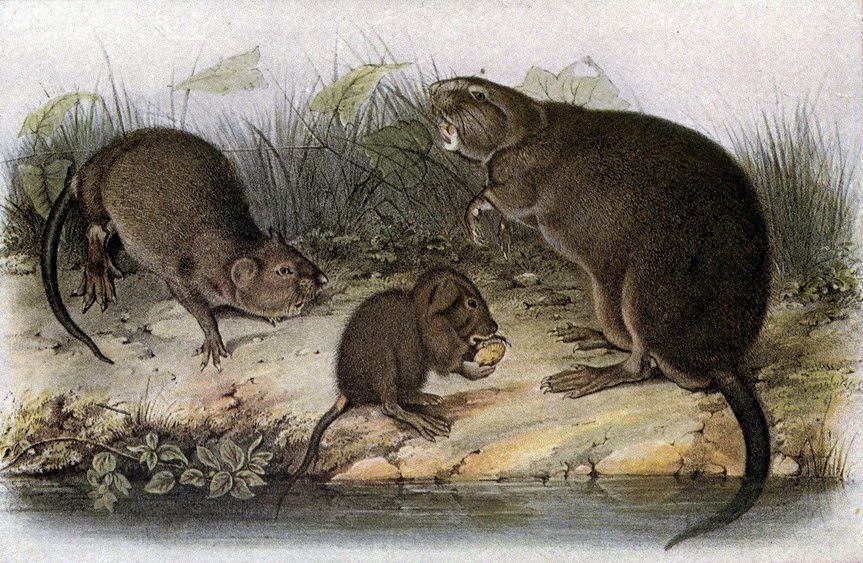 Muskrat:”It sometimes looks as if the muskrat were weather-wise and could forecast the coming season. I doubt if a long series of observations would bear out the truth of this remark, yet I have noticed that in his nest-building he sometimes hits the mark with surprising accuracy…In the fall of 1880, while the weather-wise were wagging their heads, some forecasting a mild, some a severe winter, I watched with interest for a sign from my muskrats. About November 1, a month earlier than the previous year, they began their nest, and worked at it with a will…When the cold wave struck us, about November 20, my four-legged ‘I told-you-so’s’ had nearly completed their dwelling…I approached their nest at this time, a white mound upon the white, deeply frozen surface of the pond, and wondered if there was any life in that apparent sepulchre. I thrust my walking-stick sharply into it, when there was a rustle and a splash into the water, as the occupant made his escape. What a damp basement that house has, I thought, and what a pity to rout a peaceful neighbor out of his bed in this weather, and into such a state of things as this!” 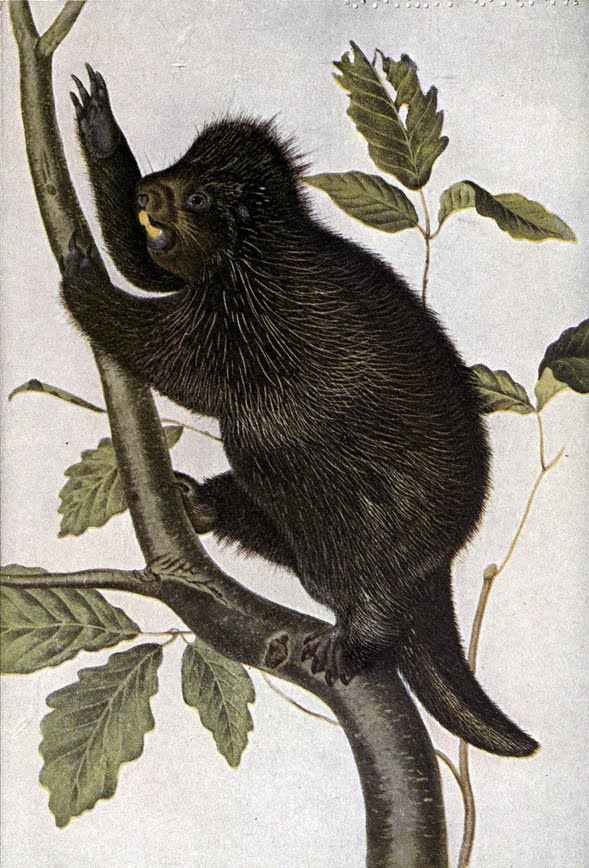 Porcupine: “One day my boy and I encountered a porcupine on the top of one of the Catskills, and we had a little circus with him; we wanted to wake him up, and make him show a little excitement, if possible. Without violence or injury to him, we succeeded to the extent of making his eyes fairly stand out from his head, but quicken his motion he would not, – probably could not.

“What astonished and alarmed him seemed to be that his quills had no effect upon his enemies; they laughed at his weapons. He stuck his head under a rock and left his back and tail exposed. This is the porcupine’s favorite position of defense. ‘Now come if you dare,’ he seems to say…

“With a rotten stick we sprang the animal’s tail again and again, till its supply of quills began to run low, and the creature grew uneasy. ‘What does this mean?’ he seemed to say, his excitement rising…When we finally drew him forth with a forked stick, his eyes were ready to burst from his head. In what a peevish, injured tone the creature did complain of our unfair tactics…His game after we led him forth was to keep himself as much as possible in the shape of a ball, but with two sticks and a cord we finally threw him over on his back and exposed his quill-less and vulnerable side, when he fairly surrendered and seem to say, ‘Now you may do with me as you like.’ Then we laughed in his face and went our way.”