Contrary to what one might think, a curiosity cabinet is not a piece of furniture, rather it is an entire room(s) dedicated to the collection of objects that are meant to bring shock, awe, inspiration, and stimulating conversation to its viewers. During the 16th-19th centuries, the curiosity cabinet became a popular way for aristocrats and aspiring bourgeoisie to show off personal wealth and erudition. These “rooms of wonder” are considered the precursors to the modern museum. However, unlike a museum collection that is organized around a specific theme e.g. archaeology, art, natural history, and sculpture, a cabinet of curiosities celebrates its own bedlam, juxtaposing disparate objects in a jumbled mass to prompt serendipitous discoveries, new connections, and eureka! moments about the manifest world.

By the 18th century, order began to coalesce out of chaos and curiosity cabinets became a bit more focused. Such was the case with a famed apothecary from Amsterdam, Albertus Seba, and his cabinet of natural history curiosities. Today, we will examine what exactly was in Seba’s celebrated collection and see if we can still find hints of the fabulous, wondrous, exotic, and down-right strange. And how are we able to peer into this almost 300 year old room of wonder that is no longer in existence? Seba was thoughtful enough to record his collected specimens in this week’s Book of the Week: Locupletissimi rerum naturalium thesauri accurata descriptio, et iconibus artificiosissimis expressio, per universam physices historiam : opus, cui, in hoc rerum genere, nullum par exstitit.

Did you know that a copy of Seba’s Thesauri was sold in 2000 at a Christie’s auction for $442,500 US dollars? The pricey memento of a time past, published between 1734 and 1765, can now be enjoyed for by you on the BHL for free. It is composed of four volumes and 446 plates: 175 of which are double-page spreads. Seba commissioned 13 artists to draw every single specimen that he owned. Plate tinting was done at the buyer’s expense therefore most of the existing copies of Seba’s Thesauri are only found in black and white. For bibliophiles interested in scientific illustration, the BHL happily provides three copies of Seba’s work in both black and white and in color> Compare a butterfly from the three copies in the BHL:

Which is the prettiest? Which one provides you with the most information about the butterfly?

While the color copies are naturally prettier, it is widely known by the research community that black and white illustrations are better scientific resources because of their ability to convey details, texture and dimension in a way that color cannot. We’re just so glad to have access to all three. Let us all thank the Museums Victoria, the Smithsonian Libraries and the Missouri Botanical Garden for contributing their copies of this magnificent work.

At the time, the boundary between art and science had not yet been drawn. Hence, Seba’s snakes slither fancifully across the page and his crustaceans and shells are arranged in pleasing patterns for the sole purpose of delighting the reader:

18th century Amsterdam was the center or European international maritime trade largely due in-part to the Dutch East India Trading Company. There couldn’t have been a better home-base for a man such as Albertus Seba, an apothecary with a penchant for collecting exotic specimens of animals, plants, and minerals to use in his medicinal concoctions. According to accounts, Seba eagerly greeted sailors at the city’s port, especially those who arrived ill and in need of medicine, because it meant he would get first dibs on the newly imported stock. In exchange for his services, medicine, or a bargain price, the apothecary was able to purchase the choicest specimens for his ever-growing natural history collection. Quickly, the collection’s reputation grew and began to be widely used by scholars all over Europe. In 1717, the entire collection was bought by a long-time patron, Czar Peter the Great for 15,000 guilders. Our book of the week actually represents Seba’s second endeavor to amass an even grander collection than the first– and grander it was – with 72 drawers of shells, 32 drawers of 1,000 European insects, and 400 jars of animal specimens preserved in alcohol, many of them containing Seba’s favorite specimen: snakes.

5 reasons to explain all the hoarding

Seba like all serious collectors amassed specimens for both practical and more abstract reasons:

1. Showing-off: Wealthy friends and respected colleagues came from all over Europe to use Seba’s collection and marvel at his magnificent treasures. The collection was a prestige magnet. As related earlier, Peter the Great was impressed.

2. Investment: Like modern collectors, owning rare and exotic items was viewed as a sound investment: “this mermaid hand will surely go up in value.”

3. Scientific Inquiry:  Apothecaries were some of the most avid collectors in Europe at this time, often experimenting with different natural compounds and searching for new cures and medicines. The work of the apothecary is regarded as the foundation of the modern sciences of pharmacology and chemistry.

4. Validation of Sensory Experience: Unlike us, Seba didn’t have the convenience of using Google Image Search to validate phenomena occurring in the natural world. To validate the existence of a new organism one needed to see, touch, hold, and experience it — in person. This might explain why it was so difficult at that time to distinguish between the veracity of a seven-headed hydra and a narwhal tusk. Both seem equally fantastic yet, we all know that the hydra is just a myth. Collecting was a way to prove to others that you weren’t crazy or just plain making stuff-up. 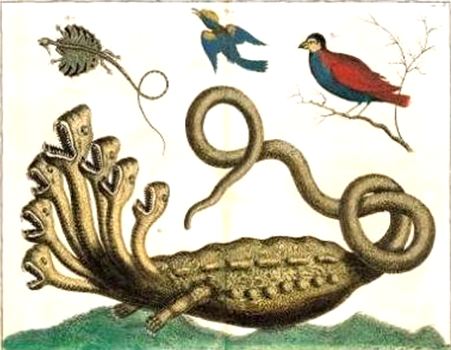 Seba admits to being doubtful at first of the hydra’s existence, but  later became convinced that the specimen was true to nature based on first-hand accounts.

5. Provide a Microcosm of the Macrocosm: In Historian Michael Wintroub’s excellent paper, Taking Stock at the End of the World, he explains that the curiosity cabinet “contain(s) specimens of every category of things and help(s) to render visible the totality of the universe, which otherwise would remain hidden from human eyes,” he goes on to say that “The wonder cabinet was a response to the apparent disorder of the world; through it the collector sought not only to win prestige, but to piece the variegated and multifarious mosaic of existence into a coherent—microcosmic—whole” (405-407) Talk about a pretty philosophical and deep reason to collect!

Clearly the reasons behind collecting are multifaceted and complex but, bring obvious advantages and joy for the inquisitive.

The fate of the curiosity cabinet

Today, while curiosity cabinets still exist, much of the meaning and purpose behind them is lost. Our view of the natural world is much more complete than ever before and many scholars claim that the Internet is the ultimate ‘Cabinet of Curiosities.’ Old rooms full of weird stuff seem less relevant than ever. However, one might also argue that to digital natives, the analog experience becomes a curiosity in itself which might explain the popularity of aesthetic movements like Steampunk that celebrate anachronistic technology in a futuristic setting —  analog has become the new sexy. Whatever your view, it is important to recognize that the Curiosity Cabinet serves an important role in the history of information, science, and intellectual inquiry. It is the antecedent to the modern museum and digital curation platforms like Tumblr and Pinterest that essentially allow an individual to collect and curate objects based on personal interests. However, the nice thing about these virtual tools is that now we don’t have to stalk sailors with scurvy to add new objects to our collections.

Want to enjoy Seba in the comfort of your own home? Now you can. Taschen Books published a reprint of the Thesauri in 2006. You can own Seba’s Thesauri reproduction for a mere 40 dollars. For taxonomists, the very best thing about the 2006 edition is the fact that they have assigned the Linnaean binomials to all of Seba’s specimens. I can assure you that I will be adding the book to my very own cabinet of curiosities — guaranteed to prompt wonder, awe and stimulating conversation whenever things get boring.

Read more about this first pictorial representation of a renaissance humanist’s cabinet of curiosities in BHL Blogger and Program Manager, Grace Constantino’s piece: The Good, the Bad, and Pest Control.