Over 210 years after Alexander von Humboldt and Aimé Bonpland’s work titled Essai sur la géographie des plantes was published, climate science, book conservation, and botanical research have converged around this 1805 work. This book was digitized and made available in 2008 by the Missouri Botanical Garden for the Biodiversity Heritage Library.

In 2015, scientists published a paper detailing their findings as they retraced the path that Humboldt and Bonpland took on their ascent up the dormant volcano, Chimborazo, in Ecuador. The paper, “Strong upslope shifts in Chimborazo’s vegetation over two centuries since Humboldt,” utilized the data and map contained in Essai sur la géographie des plantes and presented modern data from the same locations as detailed in Essai to reveal the effects of climate change on the volcano.

As Stephen T. Jackson writes in the 2009 book, Essay on the geography of plants, the significance of Humboldt and Bonpland’s work describing their ascent up Chimborazo lies in the detailed data they collected at various elevations. Jackson and historian Andrea Wulf have noted that while most people have forgotten Humboldt, his significance in unifying early scientific disciplines into an inter-connected web of life cannot be understated. Measurements taken on Chimborazo include light intensity, temperature, barometric pressure, and gravitational force. Descriptions of the flora and fauna at various levels of Chimborazo were described and illustrated on the map contained with Essai sur la géographie des plantes.

Morueta-Holme et al., the scientists who retraced Humboldt and Bonpland’s course up Chimborazo, also took measurements and made observations at the same locations that were originally recorded in 1802. More specifically they noted the migration of the flora up Chimborazo to look at the effects of anthropogenic climate change upon the region (something Andrea Wulf notes that Humboldt warned about in the early nineteenth century). And one more final fact, Humboldt’s expedition was record setting at that time for the highest ascent.

While the aforementioned paper was being written, in early 2014, the Peter H. Raven Library at the Missouri Botanical Garden loaned its copy of the Essai’s map to the Americas Society for an exhibition entitled, Unity of Nature: Alexander von Humboldt and the Americas. While the Americas Society did not want the text to accompany the map, the condition of both was given a cursory examination at that time. The Library’s director decided that the volume should be scheduled for a complete conservation treatment.

In December of 2014, the Library’s book conservator examined the volume more thoroughly to assess damage and make decisions about the book’s treatment.

The Essai still had what was apparently its original, early 19th century binding. It was bound in a style called half leather, which means that there was leather on the corners, the spine, and the edges of the covers next to the spine. The rest of the covers were lined with a marbled paper. The volume’s covers were detached from the textblock, and the leather on the spine was badly decayed. There were some other relatively minor issues, such as missing endbands and a few paper rips, but the detached covers and the decayed leather were the most significant problems that needed to be addressed in order to make the book functional again.

Because the Essai is a physical artifact as well as a text, the conservator attempted to save as much of the original binding as possible. The covers, with their attractive marbled papers, were reused, but the leather along the spine was so badly decayed that it had to be removed and replaced with new leather.

Board reattachment is a very common procedure in book conservation. Our conservator began the process by removing all of the decayed leather from the spine and the edges of the covers. She then cleaned the old glue and paper liner off of the book’s spine. Once the back of the book was clean, she adhered new paper and cotton cloth linings to the spine, using a water-based adhesive that can easily be removed if need be by conservators in the future.

The cotton cloth lining was cut to extend beyond the edge of the spine, and the boards were reattached to this cotton hinge, again using water-based adhesives.

After reattaching the boards, the conservator cut and adhered a new piece of leather to the spine and the edge of the boards closest to the spine. Enough of the original spine was left to provide clues about its original appearance—it had 5 false raised-bands, gold lines on the sides of the bands, and a label of black leather. The conservator recreated this original, early 19th century style spine treatment in her new spine.

The finished book was functional and true in appearance and materials to the early 19th century.

Dr. Ulloa Ulloa, whose research focuses on the páramo regions (the area of high elevation on mountains above the tree line yet below the snowcaps), has published numerous articles and books on the flora of the páramo regions of the Andes. Her favorite family of plants in the páramo is Berberidaceae (barberry).

To aid in the identification of Berberidaceae and other plants including many of the páramo region’s flora, a free app (available on Android phones) called Flóramo, developed by two young Ecuadorian computer engineers, Luz Marina Unda (Dr. Ulloa Ulloa’s niece) and Valetín Zapata, is also available for download. Additionally, people can explore images of Berberidaceae on both the Flora of the World website and on the Encyclopedia of Life website.

Dr. Ulloa Ulloa describes Humboldt’s visit to Ecuador as inspirational and an influence upon her own career. She splits her time conducting research between the U.S. and Ecuador. She also has a presentation about her recent experience of following in the footsteps of Humboldt that has been presented to various audiences.

After 200 years, the significance of Humboldt and Bonpland’s expedition to Ecuador and Chimborazo have not diminished. His original work is being preserved to aid modern science and science is still turning to the Essai sur la géographie des plantes for modern answers. 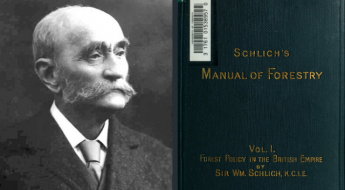