John Bartram was born in Marple, Pennsylvania in 1699. Although he received limited formal education, he eventually distinguished himself as one of the leading botanists of his day. Through an early and intense interest in botany, he collected rare and useful plants and seeds throughout the colonies which he provided to the gentlemen of Europe, an opportunity which arose from his close friendship with the English botanist, Peter Collinson.

He also established one of the finest botanic gardens of the colonial period in Kingsessing (now part of the park system in south Philadelphia). He grew dozens of species of trees, shrubs, and other plants collected on his travels. He even experimented with breeding and selection of cultivars to meet a demand abroad for exotic plants. His botanical supply business was so successful that it provided the income and incentive that enabled him to travel around the colonies and to Florida in search of new specimens.

One such collecting trip occurred in July 1743, when Bartram accompanied Conrad Weiser and Lewis Evans, a skilled cartographer, on a journey to the Iroquois capital, Onondaga (modern day Syracuse). Interestingly, the primary purpose of this trip was more diplomatic than scientific. Weiser was officially Pennsylvania’s main ambassador to the Native Americans. There had been a clash between settlers in Western Virginia and an Iroquois hunting party in the fall of 1742, and rumors of a possible war in Virginia had alarmed those in Pennsylvania. The trip was meant to encourage peace between the Iroquois Confederacy and Virginia. Bartram saw this trip as an opportunity to explore the vast forests in this little known Indian territory, as yet undisturbed by European settlers.

In addition to plant material, Bartram’s English botanist friend, Peter Collinson, had requested a written account of the trip. Unfortunately, in the spring of 1744, the ship carrying Bartram’s manuscript and specimens to London was captured by the French. Bartram had to make another copy of his journal and this copy did not reach Collinson until 1750.

The account of Bartram’s six week journey from Pennsylvania to Upstate New York was so popular among Collinson’s circle that Collinson had the work printed in 1751 by J. Whiston and B. White in London. The published work was entitled Observations on the inhabitants, climate, soil, rivers, productions, animals, and other matters worthy of notice, made by Mr. John Bartram, in his travels from Pensilvania to Onondago, Oswego and the lake Ontario in Canada; to which is annex’d, a curious account of the cataracts at Niagara, by Mr. Peter Kalm, a Swedish gentleman who traveled there and included a brief description of Niagara Falls by the naturalist Peter Kalm.

Unfortunately, at the time, this work was criticized by some for not including enough detail in the descriptions of the plants that Bartram encountered. This criticism does not account for the fact that the journal had been written as a running account for Collinson, who would already have been familiar with the plants that Bartram mentioned. Others criticized the errors in spelling and syntax found throughout the work, due to lack of editing and because the printer had trouble interpreting Bartram’s handwriting and spelling. Today, this work is viewed as an important early insight into the region’s ecology and the activities of the Native American population during the colonial period.

The American Museum of Natural History (AMNH) Library recently digitized its copy of this work and has made the volume accessible via BHL at this link: http://dx.doi.org/10.5962/bhl.title.112297. This volume was purchased by the Library in 1941 from a local bookseller. The original owner of this copy was Frank Hayward Severance (1856-1931), a leading authority on the Buffalo /Niagara area during the early twentieth century. After graduating from Cornell University in 1879, Severance spent the early part of his career as a reporter, editor and lecturer. He later authored several books about the Niagara frontier.

Mai Reitmeyer is the Senior Research Services Librarian at the American Museum of Natural History Library. 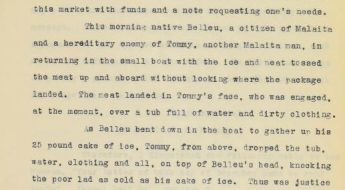