At the end of the eighteenth century, the “father of German ornithology” began publishing a German translation of General Synopsis of Birds, an important work by John Latham, the “grandfather of Australian ornithology” [5][6].

This German edition, entitled Johann Lathams Allgemeine Uebersicht der Vögel ([1792] 1793-1812), was translated and edited by Johann Matthäus Bechstein (1757-1822). As his moniker suggests, Bechstein was a pioneer in German ornithology, having produced what is often regarded as the “first modern handbook of German birds,” Gemeinnèutzige Naturgeschichte [5]. With his translation of Latham’s work, Bechstein made descriptions of worldwide bird species more accessible to German readers.

Latham’s General Synopsis of Birds, published in three volumes between 1781-1785 followed by supplements in 1787 and 1801, not only provided a natural history of the birds of the world but also importantly presented many Australian species to the European public for the first time.

Born at Eltham, Kent, England in 1740, Latham trained as a physician and set up a medical practice in Darenth at the age of 23. After he was established, Latham began a more concentrated study of natural history, amassing a library and collection of specimens to support his research. By 1800, Latham had recorded around 3,000 bird species [3].

Latham’s period of ornithological study coincided with the arrival in England of a wealth of specimens and drawings from Australia. These collections, resulting from Captain Cook’s voyages to Australia and Polynesia (1769-75), included many new-to-science bird species [1]. As a friend and correspondent of many of England’s leading naturalists, Latham had access to these collections. He included descriptions and illustrations of many of these new species within his General Synopsis of Birds [2].

Latham provided only vernacular descriptions for the species in his General Synopsis and its first supplement. In 1790, after realizing that he would only receive credit for naming the species if he provided Latin binomials under the Linnaean system, Latham published Index Ornithologicus, a systematic catalog assigning binomial names and taxonomic classifications to the birds in the three volumes and first supplement of General Synopsis [7].

Unfortunately, between 1788-1789, German naturalist Johann Friedrich Gmelin had published an expanded edition of Linnaeus’s Systema Naturae, providing Latin names for many of Latham’s birds. These names have priority over those published in Index Ornithologicus, and as such Gmelin is credited as the first to scientifically describe many of the species first introduced through Latham’s General Synopsis [2].

However, Latham is still the authority for many of the names in the Index and second supplement, and he is recognized as the first to scientifically describe many iconic species, such as the hyacinth macaw (Anodorhynchus hyacinthinus), and Australian species, including the emu (Dromaius novaehollandiae). His extensive contributions to Australian ornithology earned him the nickname the “grandfather of Australian ornithology” [2].

The four volumes of Bechstein’s Johann Lathams Allgemeine Uebersicht der Vögel constitute German translations of the three volumes and first supplement of General Synopsis as well as the Index Ornithologicus. In addition to the translation, Bechstein added “much additional matter” [7]. Each volume (or band) was issued in two parts (or theils). The plates are largely reproductions of those from General Synopsis, many of which Latham designed and etched himself [6].

Bechstein’s legacy extends well beyond his translation of Latham’s ornithological work. He was not only a pioneer in German ornithology, but he also contributed extensively to studies on forestry, founding the school of forestry at Waltershausen in 1795 and being named the director of the forestry school at Dreissigacker in 1800. He was also an early advocate for wildlife conservation, encouraging protection for many species then deemed pests, including bats [4].

You can browse more of Bechstein’s works in BHL.

Thanks to the Natural History Museum Library, London, you can freely explore all four bands, constituting eight volumes in total, of Johann Lathams Allgemeine Uebersicht der Vögel in BHL. 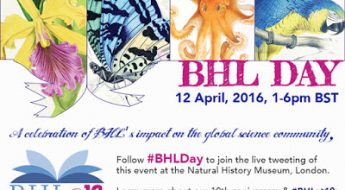