This post was written by Alexandra K. Alvis, reference librarian in the Joseph F. Cullman 3rd Library of Natural History. The Cullman Library holds the Smithsonian’s collection of rare books in anthropology and the natural sciences. Its world-class collection contains approximately 20,000 volumes published before 1840, all of which are available for consultation in our reading room. The Cullman has contributed over 4,700 volumes to BHL, with more being added every week. 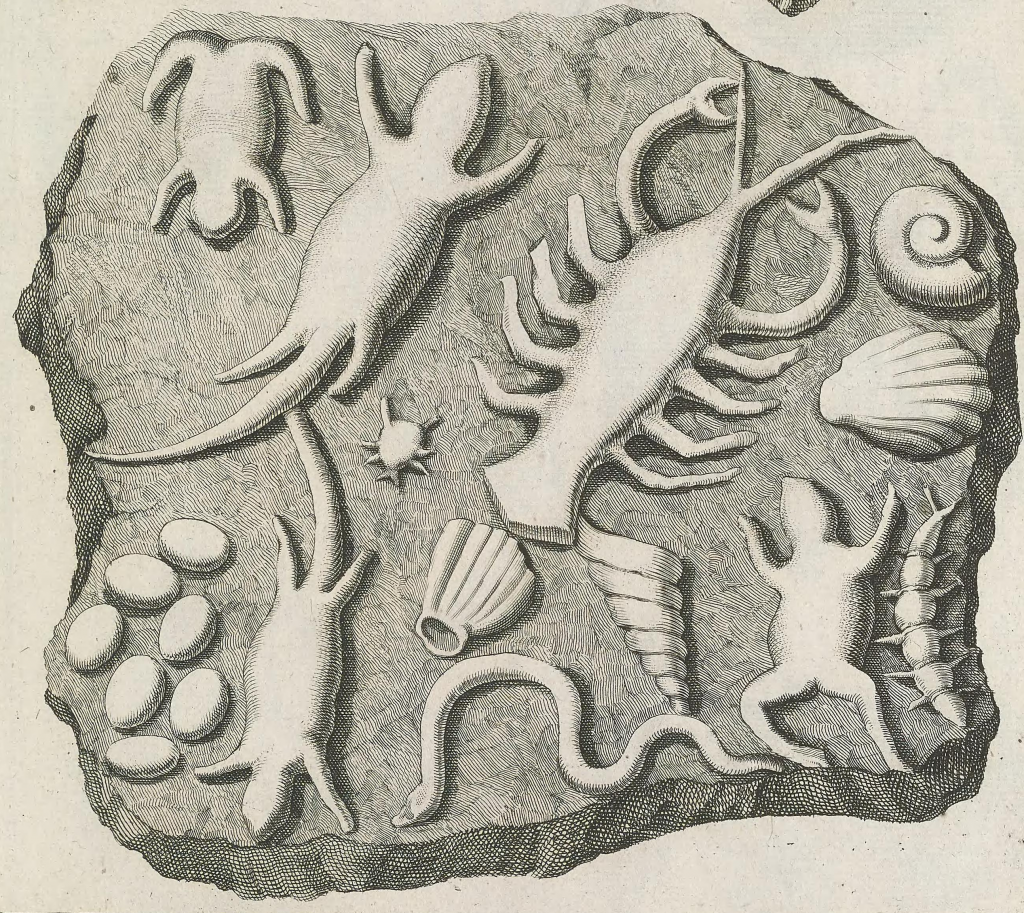 Tab. I from Beringer’s Lithographia (1740). Contributed in BHL from Smithsonian Libraries.

This tale of stony deception began when the twenty-seven year old Beringer was named professor at the University of Wurzburg in 1694, only a year after achieving his doctorate in medicine there.[2] In 1695, he was summarily appointed keeper of the botanical gardens of the University. In this period, medicine was heavily anchored by botanical knowledge; the main components of most cures and salves were plant-based concoctions. Beringer was particularly enthralled by the natural history side of his career, and passionately expanded his personal cabinet of curiosities to display his collection of interesting objects from the natural world. He also began to pepper his lectures with references to “petrifactions,” a catch-all term for what modern science now understands as fossilized remains of plants and animals. 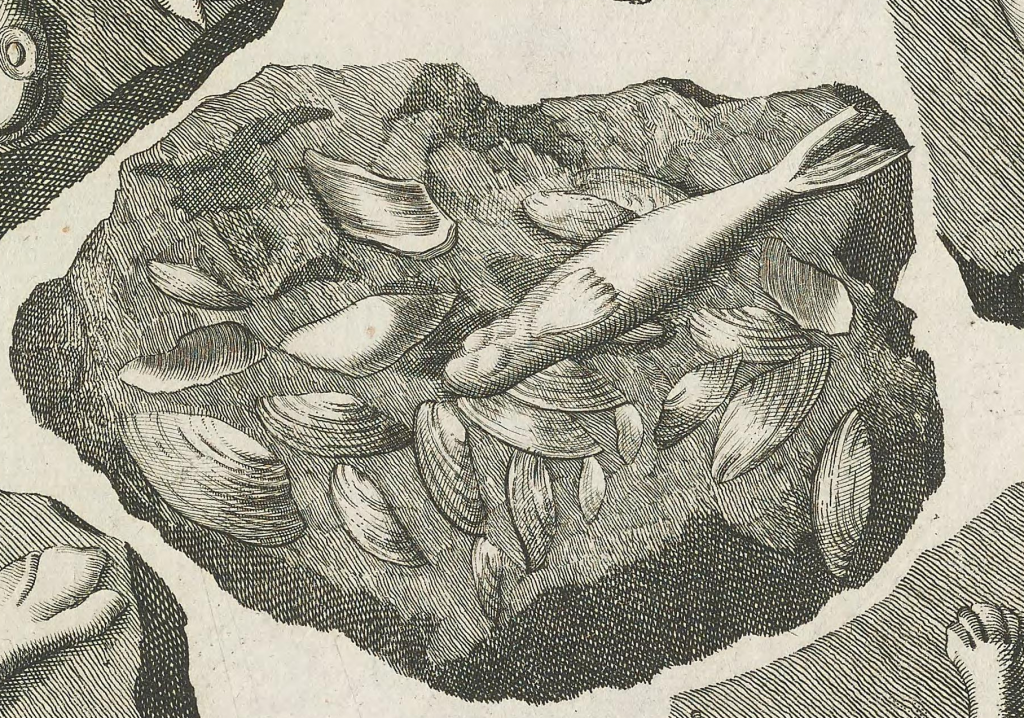 Beringer’s rise through the academic ranks did not go unnoticed. J. Ignatz Roderick, a University of Wurzburg professor of geography, algebra, and analysis, and Georg von Eckhart, the University librarian, resented what they saw as Beringer’s arrogance[3] and plotted to deflate his ego. Aware of Beringer’s fascination with the fossils in the shell lime deposits of Mount Eibelstadt[4] and his collecting practices, Roderick and Eckhart formulated a plan to carve and plant fake fossils on the mountain. In 1725, they placed their first specimens and enlisted the assistance of Beringer’s “diggers”— three boys that Beringer had hired to search the mountain for “figured stones” for his cabinet— although only one of the boys knew the full extent of the deception.[5]

And so, their trap was laid: when the boys returned from the mountain with the first three fakes, Beringer was thrilled. News of the fantastic stones spread, and the boys began receiving requests for their stone-hunting abilities from local pharmacists, rich gentlemen, and even some of Beringer’s fellow medical doctors.[6] Beringer himself visited the mountain on several occasions, and remarked on the fact that the hillside which he had “frequented and examined in the past but had never scrutinized very closely, revealed a treasure.”[7] As the false stones continued to turn up, Beringer began to display them to friends and colleagues, not all of whom were as certain of their veracity as he was. He writes that “to dispel these misgivings from their minds, I led some companions on the pleasant jaunt to the site… where they dug out these portentous symbols of natural things with their own hands.”[8] 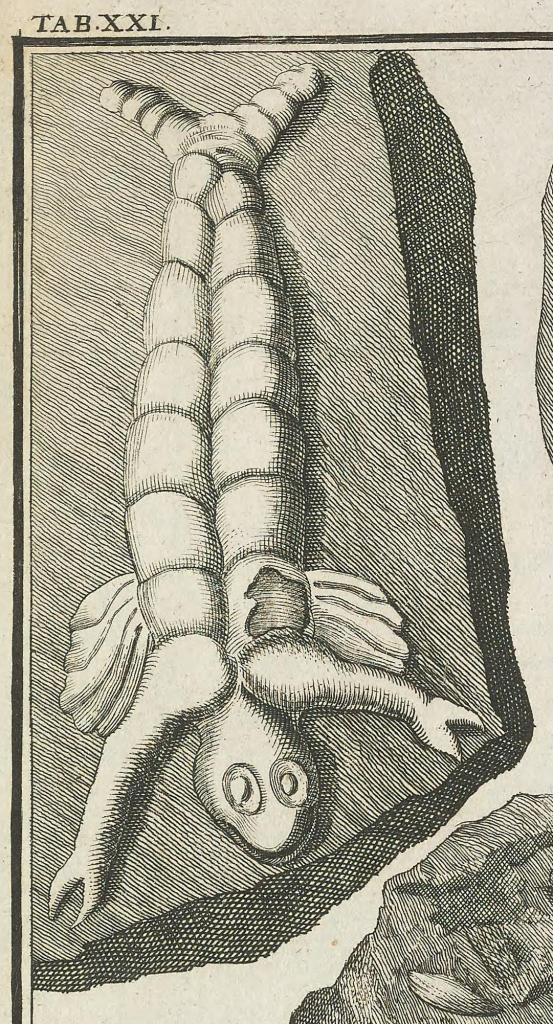 Many of the fossils found on the mountain were genuine, which certainly contributed to Beringer’s unwillingness to consider the possibility of deception in the more whimsical examples. Although his cabinet no longer survives, Beringer’s records show that it contained numerous specimens of these real fossils until Roderick and Eckhart began to surreptitiously contribute to his collection. He developed complex theories to explain the more fantastical items: the stones with writing, even with their occasional spelling and orthographical mistakes, were the work of God, to ensure that “when forgetful men grow silent, these mute stones might speak.”[9] The images of celestial activity such as shooting stars and radiant suns could be explained in reference to the Archimedian method of using a parabolic mirror to “collect [sunlight] in a bowl” in order to focus it to set fire to an enemy fleet.[10] 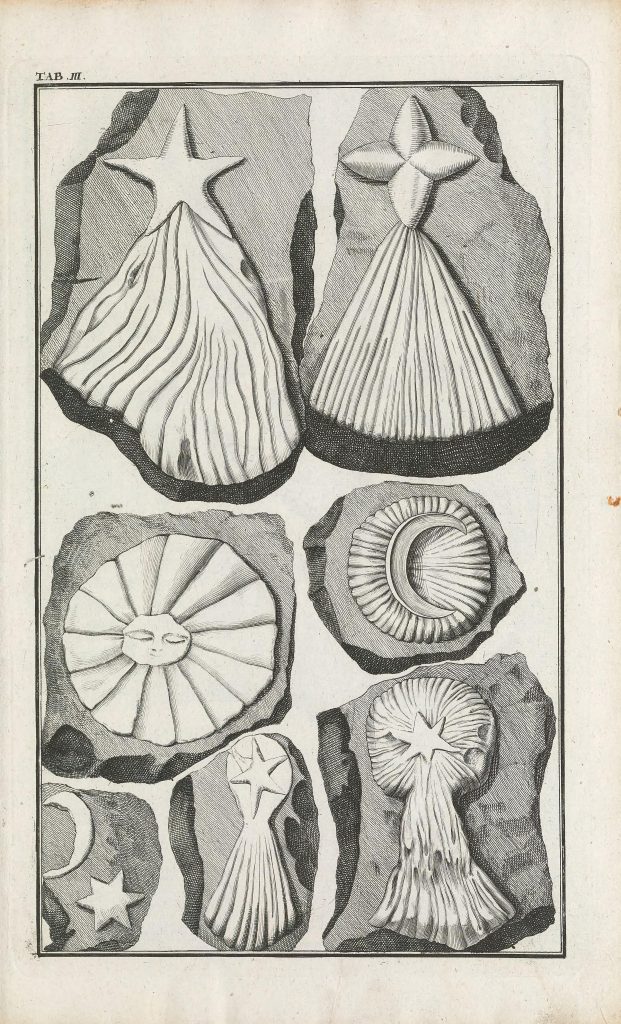 Beringer compiled these theories and justifications, along with engraved plates of the figured stones, into a dissertation to be titled Lithographia Wirceburgensis. As word reached Roderick and Eckhart that Beringer intended to publish on their hoax, it seems they felt a pang of guilt; they started a rumor that the stones had been false all along, and even sold some of them to him directly, later informing him of how they were made.[11] But Beringer put no stock their words, instead criticizing the rumor and confession as an attempt to discredit him in chapter 12 of the Lithographia.[12]

History does not record what catalyst finally changed Beringer’s mind about the origin of the stones; the story passed down through generations of scientists claims that, in translating one of the Hebrew inscriptions, he discovered his own name after the publication of the Lithographia. Disgraced, Beringer immediately sought to recall and buy back the printed sheets distributed to booksellers.[13] Historical lore describes how this process bankrupted him, although there is no evidence that this was ultimately the case. He subsequently brought a court case against Roderick, Eckhart, and the three diggers in 1726; the term “lying stones” (Lügensteine in German) was used in the case to describe the fraudulent fossils. In the course of the lawsuit, the boys were found not guilty, but the duplicity of Roderick and Eckhart was fully exposed.[14] Beringer spent his remaining thirteen years of life on staff at the University, where he published two further books.[15] But criticisms of his Lithographia have dogged his reputation as a scientist since, to the point that even his entry in the Dictionary of Scientific Biography is principally concerned with his mistake. Roderick and Eckhart suffered more immediate effects: Roderick was banished from Wurzburg, and Eckhart was denied further access to archives of the Duchy.[16] This dealt a crushing blow to his scholarship, much of which was left unfinished at his death.[17] 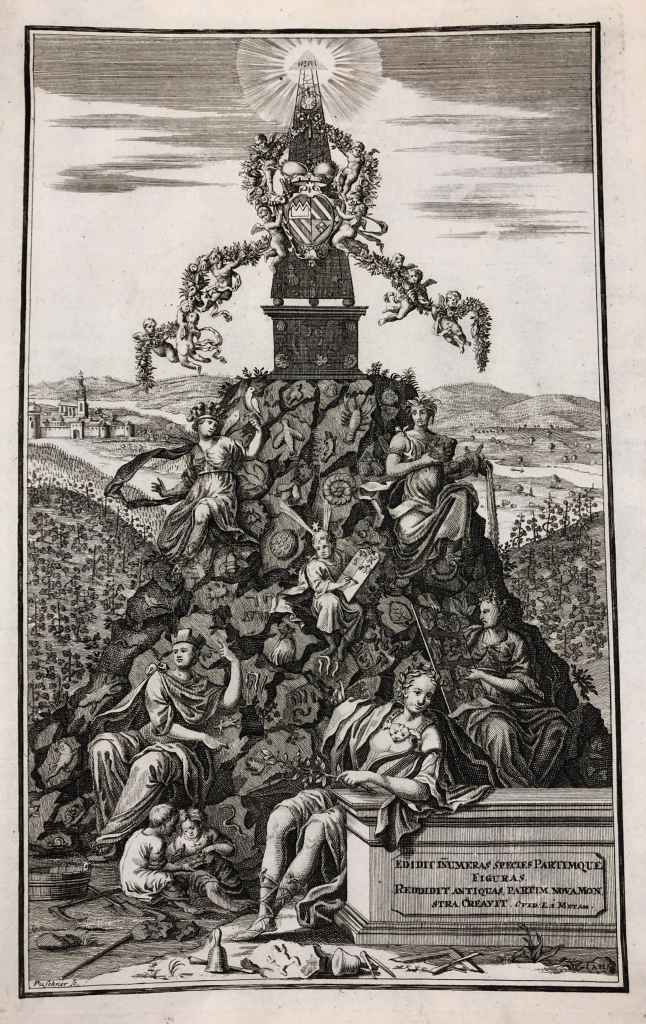 The end of Beringer’s story is just the beginning for the Smithsonian Libraries’ copy of the Lithographia. It is housed in our Joseph F. Cullman 3rd Library of Natural History, and is somewhat of a bibliographic curiosity. While the title page of our copy claims it is the second edition, it is actually the second issue, incorporating the recalled sheets from the first printing. It is speculated that one of Beringer’s sons is responsible for this re-issue, perhaps to recoup some of the costs from their father’s failed effort.[18] Curiously, it lacks any sort of permanent binding, although material evidence of former binding structures suggests it had one in the past. Instead, it is loosely glued together with a scrap of a German map of Sardinia and Piedmont dated 1793. It further features its frontispiece bound in with the plates. The frontispiece is a work of art in itself, depicting the Roman poet Ovid in repose, gesturing to a mountain composed of Beringer’s figured stones as cherubs and other symbolic figures look on. In the foreground sits one of the stones surrounded by carving tools, meant by Beringer to be a nod to the divine hands that crafted them, but more ironically representative of Roderick and Eckhart’s deceit.

Before coming to the Cullman, this copy of the Lithographia belonged to Austrian lawyer and botanist[19] Josef Bonaventura Holzinger (1835-1912). Holzinger was an avid antiquarian book collector with a distinctive bookplate, and the Cullman also holds another item from his collection, Euricius Cordus’ 1534 Botanologicon. But the Lithographia has a closer Smithsonian connection: it was most recently owned by Dr. Norman F. Sohl, a scientist with the United States Geological Survey. Dr. Sohl was an invertebrate paleontologist particularly interested in mollusks, and collected numerous fossil specimens that are still housed in the National Museum of Natural History. The Smithsonian Institution Archives also holds two boxes of Dr. Sohl’s papers.[20] Despite the fact that the items described in the Lithographia are known to be fakes, it is clear that the work is valuable to collectors in the field. 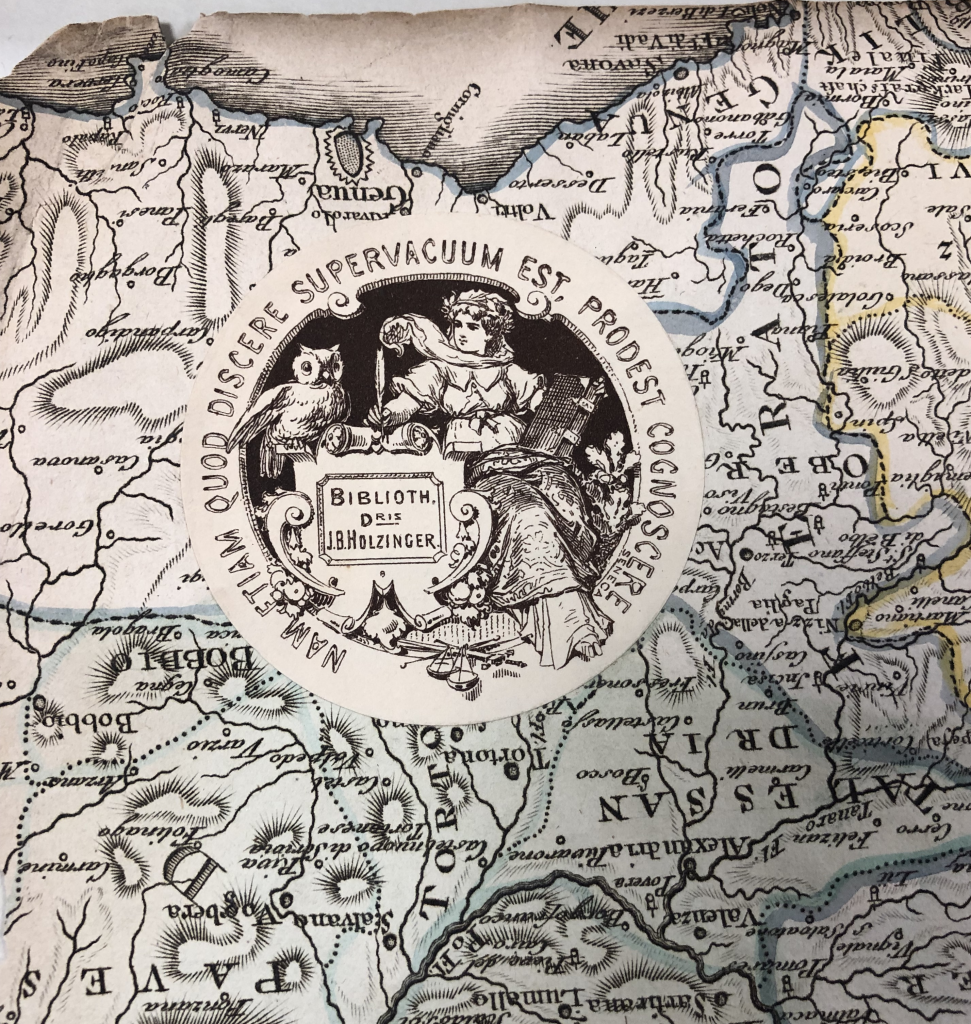 Holzinger’s bookplate from the Cullman copy of Beringer’s Lithographia (1740). Contributed in BHL from Smithsonian Libraries.

While Beringer and the Lithographia are now best remembered for the deception associated with them, his work is actually an important benchmark in the history of paleontology. As Melvin E. Jahn and Daniel J. Woolf describe in their 1963 work The Lying Stones of Dr. Johann Bartholomew Adam Beringer, the period in which the Lithographia was published was a time of seismic changes in how fossils and their origins were understood.[21] The very fact that Beringer presented numerous theories for the formation of his stones is indicative of how the science of the time was in flux. The Lithographia then is more than a reputation-shattering hoax, and is instead a window into paleontological thought of the 18th century. Its second issue is a precious survivor of a time before science was certain about fossils, and shows a crossroads between the theory that fossils were distributed in Great Flood of the Old Testament and the theory that the world is old enough to have changed dramatically over the ages.

[19] As described in the University of Glasgow Library’s catalog record for a book once part of his collection, a c. 1483 edition of the Secreta Mulierum et Virorum of Psuedo-Albertus Magnus: https://www.gla.ac.uk/myglasgow/incunabula/a-zofauthorsa-j/albertusmagnuspseudo-secretamulierumetvirorumcumcommentostrassburgca1483/ 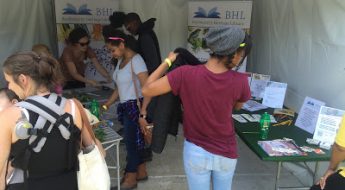 Inspiring Discovery at the 2016 BioBlitz and Biodiversity Festival in Washington, D.C. 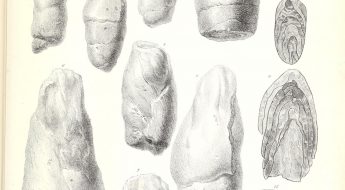 « Previous post
Between Nature and Society: Empowering Research on the History of Science
Next post »
Lydia Moore (Hart) Green, Illustrator for The Fishes of Illinois