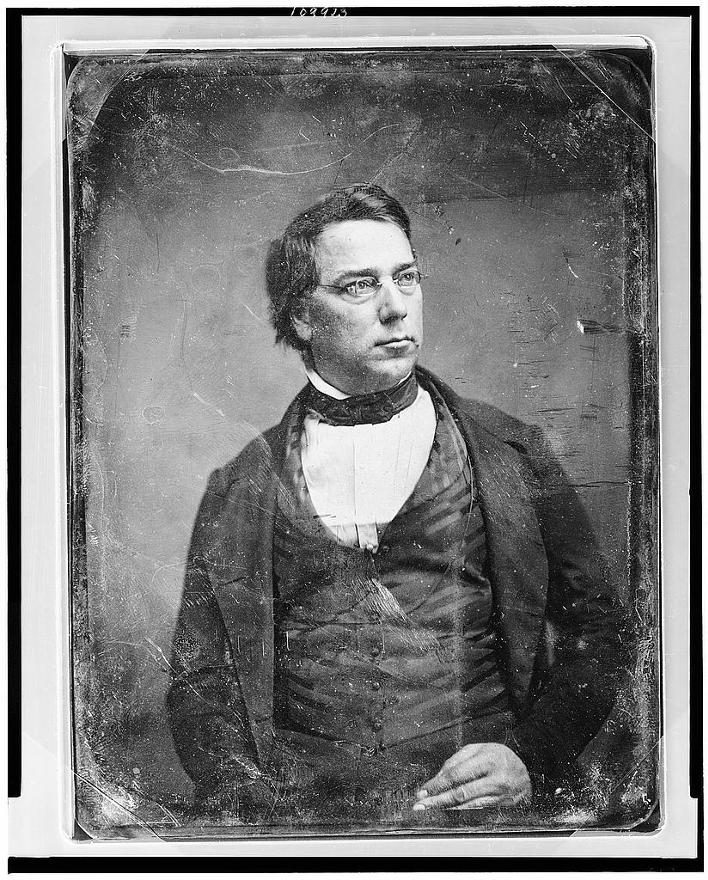 George Perkins Marsh (1801-1882) was a talented linguist, scholar, and diplomat. He served as a member of the U.S. House of Representatives from Vermont’s 3rd district from 1843-1849, and, in 1850, went on to become United States Minister to the Ottoman Empire. In 1861 he was appointed by President Lincoln as the first Ambassador to the Kingdom of Italy, where he served until his death at Vallombrosa in 1882. A Vermonter raised close to the forests of the Adirondack Mountains, Marsh is remembered today chiefly for his role as an early and influential pioneer of the conservation movement in the United States. His book Man and Nature:Or, Physical Geography as Modified by Human Action, published in 1864, is recognized for his early recognition of the interdependency of the natural world, the effects that human actions can have upon it, and the responsibilities that humans bear for those actions.

“The importance of the restoration of disturbed harmonies…” (Preface)

The publication of Marsh’s book followed a celebrated lecture which he gave before the Agricultural Society of Rutland County, Vermont in 1847. This lecture is often pointed to as a remarkably early warning about humankind’s ability to affect the climate of the Earth. What stands out in Marsh’s book is his argument that human activities can have far-reaching effects far beyond what is immediately observable. Felling a forest, far beyond just cutting trees, can disturb an entire ecosystem. In his Preface, Marsh advocates for the “restoration of disturbed harmonies” through a combination of wilderness preservation and enlightened practices for forest management.

“But man is everywhere a disturbing agent. Wherever he plants his foot, the harmonies of nature are turned to discords…” (pg. 36)

Man and Nature looks at various ways man has transformed the environment, affecting both major and minor components of the earth’s overall systems in comprehensive and unforeseen ways. Forests, rivers and waterways, sand dunes and soil are all interconnected in a greater ecological system that supports life on the Earth. Marsh paints a picture of overall interconnection between living things: trees, scrub, sea cows, worms, wild trout and “minute organisms.”

Still, it should be noted that Marsh was not categorically opposed to human actions that produce change. Rather, he was a pioneering advocate for sustainable development and of well-considered improvements based on observation and scientific knowledge. His chapter on Geographical Changes expresses mixed admiration for some engineering feats such as the Suez Canal, but in general his assessments of the long-term effects of human improvements to nature carried out in Europe, and even in the Ancient World, are mixed.

“I have spoken of the needs of agriculture as a principal cause of the destruction of the forest…” (pg. 325)

Marsh also discusses agricultural cattle and the ways in which “the extent of cleared ground required for agriculture use depends very much on the number and kinds of cattle bred.” When heritage cattle, traditionally foragers able to survive in rugged environments, are replaced with less robust hybrids that must be sheltered and fed with cultivated cereal grasses, there is a heavy toll on the environment. In addition, large-scale agricultural operations were already in place in Marsh’s time, with cotton, tobacco and feed grains for cattle taking up large swathes of cleared and tilled land. This monocropping trend continued into the 20th century; by 1950, the number of farms was the smallest ever enumerated by the Census, while the acreage was the largest on record. 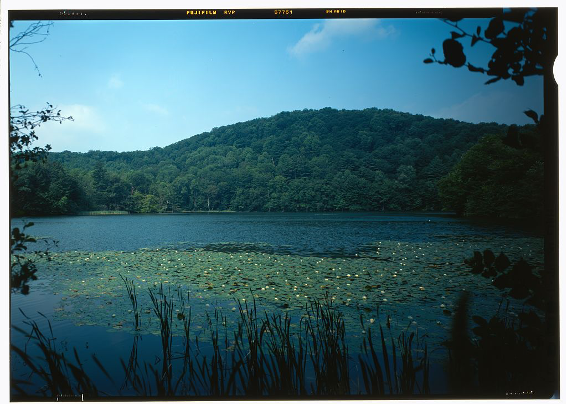 “With the disappearance of the forest, all is changed” (pg. 214)

Marsh also looks to the influence of the forest on water systems and the many ways in which forests regulate natural springs and waterways. Cleared land, he writes, especially arable land, is prone to flooding and erosion – events that would naturally be controlled by forest management. Forests control flooding naturally: “the surface of a forest in its natural condition can never pour forth such deluges of water as flow from cultivated soil.” Flooding, soil compaction, aridity, runoff, erosion: all are deleterious effects of deforestation and interference with natural processes.

He also discusses the influence of the forest on temperature; cleared land is warmer than forest and “we must conclude that the forests in Northern America exert a refrigerating influence”. Forests are made up not only of trees, but of mosses and fungi, among other organisms, as well as animals, soil and water, and these all play a role in regulating moisture and temperature.

“It is time for some abatement in the restless love of change which characterizes us, and makes us almost a nomadic rather than a sedentary people. We have now felled forest enough everywhere, in many districts far too much. Let us restore this one element of material life to its normal proportions, and devise means for maintaining the permanence of its relations to the fields, the meadows, and the pastures, to the rain and the dews of heaven, to the springs and rivulets with which it waters the earth.” (pg. 328)

This impassioned plea, central to the chapter titled Instability of American Life, and to the entire book itself, follows a lengthy, sometimes rambling but painstakingly detailed, investigation of the interconnectedness of life on Earth. Marsh’s chief message is his repeated call for humans to accept their responsibilities as stewards of the Earth, and especially as stewards of the forests. He calls for humans to re-examine their relationship with nature and their too-often destructive actions.

Marsh’s advocacy for a new understanding of forestry systems and implementation of human responsibility in forest management practices resulted in Marsh’s work contributing greatly to the conservation movement and the creation of one of the earliest forest preserves in America, Adirondack Park. His book ends with the statement that there is nothing small in nature:

“…in the vocabulary of nature little and great are terms of comparison only; she knows no trifles, and her laws are as inflexible in dealing with an atom as with a continent or planet.” (pg. 548) 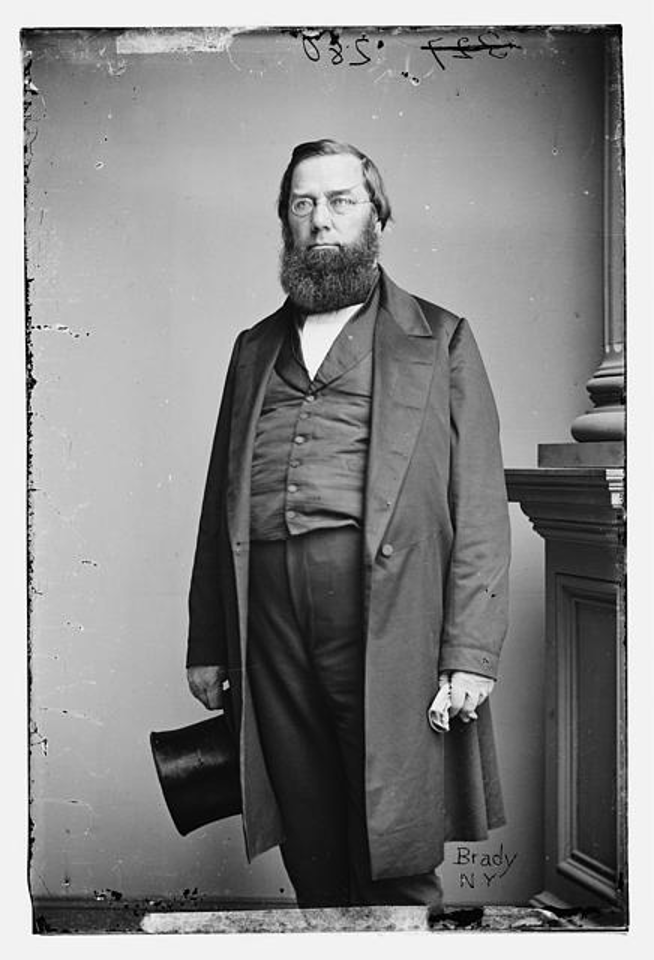 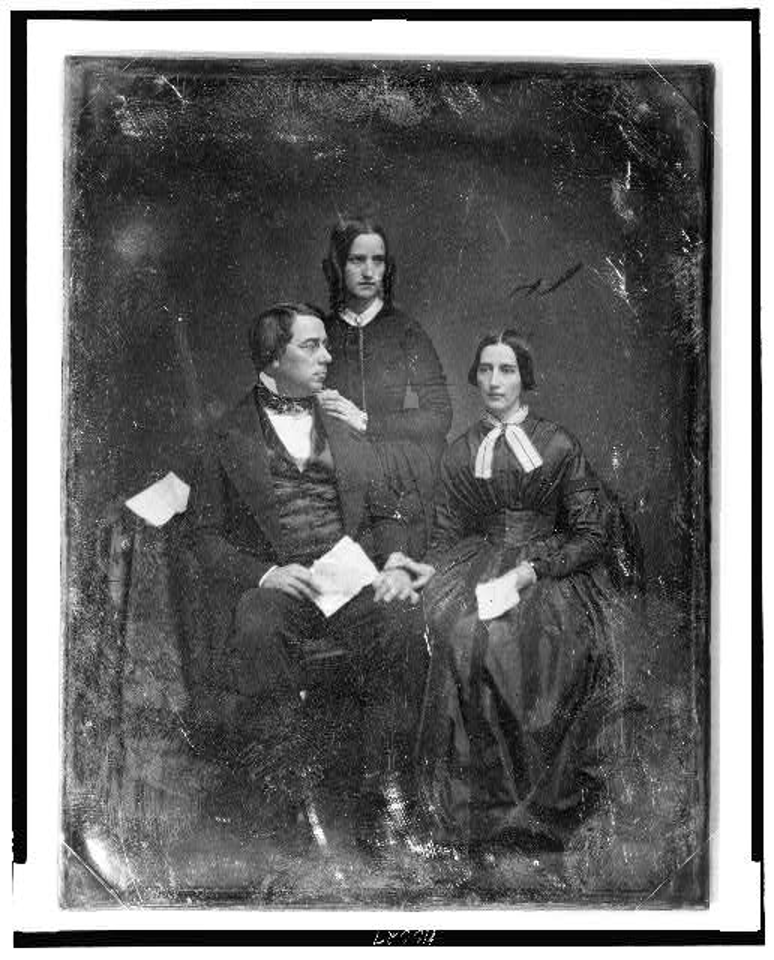 George Perkins Marsh family. Marsh seated on the left, his wife, Caroline (Crane) Marsh, seated on the right; Caroline’s sister, Lucy Crane, standing behind and between them. Between 1844 and 1849. Mathew B. Brady, photographer. Library of Congress Prints & Photographs Division. https://www.loc.gov/item/2004664023/.

Report made under authority of the legislature of Vermont, on the artificial propagation of fish, by George P. Marsh. LCCN: https://lccn.loc.gov/06012522. BHL: https://www.biodiversitylibrary.org/bibliography/34497. 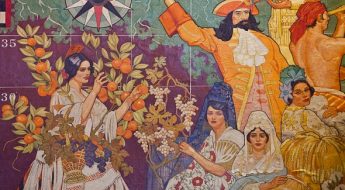