Have you ever wondered what a fish looks like inside? With the advent of x-ray technology, your curiosity can be sated, all without having to dissect a fish. And with the new Smithsonian exhibit, X-Ray Vision: Fish Inside Out, you can explore the evolutionary development of fish through a progression of x-rays from cartilaginous to bony fish. Our friends at EOL brought this exhibit to our attention through their online collection by the same name, which not only displays the incredible x-ray images seen in the Smithsonian exhibit, but also provides links to species pages providing more information about the fish showcased in each x-ray. Browsing through the EOL collection, we realized that one of the books in our collection features illustrations of a majority of the fish-types represented, and we thought that it would make a perfect book of the week post.

Celebrating the awesome power of x-rays, bringing us fish from the inside-out, we proudly present fish from the outside-in, aligning the Smithsonian and EOL exhibits X-Ray Vision with our book of the week: Our Country’s Fishes and How to Known Them: A Guide to all the Fishes of Great Britain (1902), by W.J. Gordon. In this post, we highlight just a few of the species featured in the exhibit, alongside portraits of them or members of their genus in our book of the week, and garnished with a few fun facts. Enjoy! 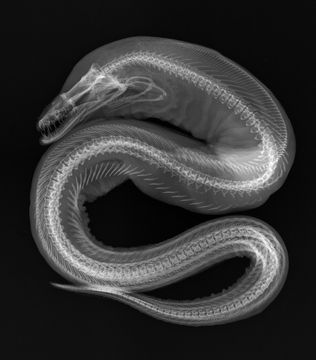 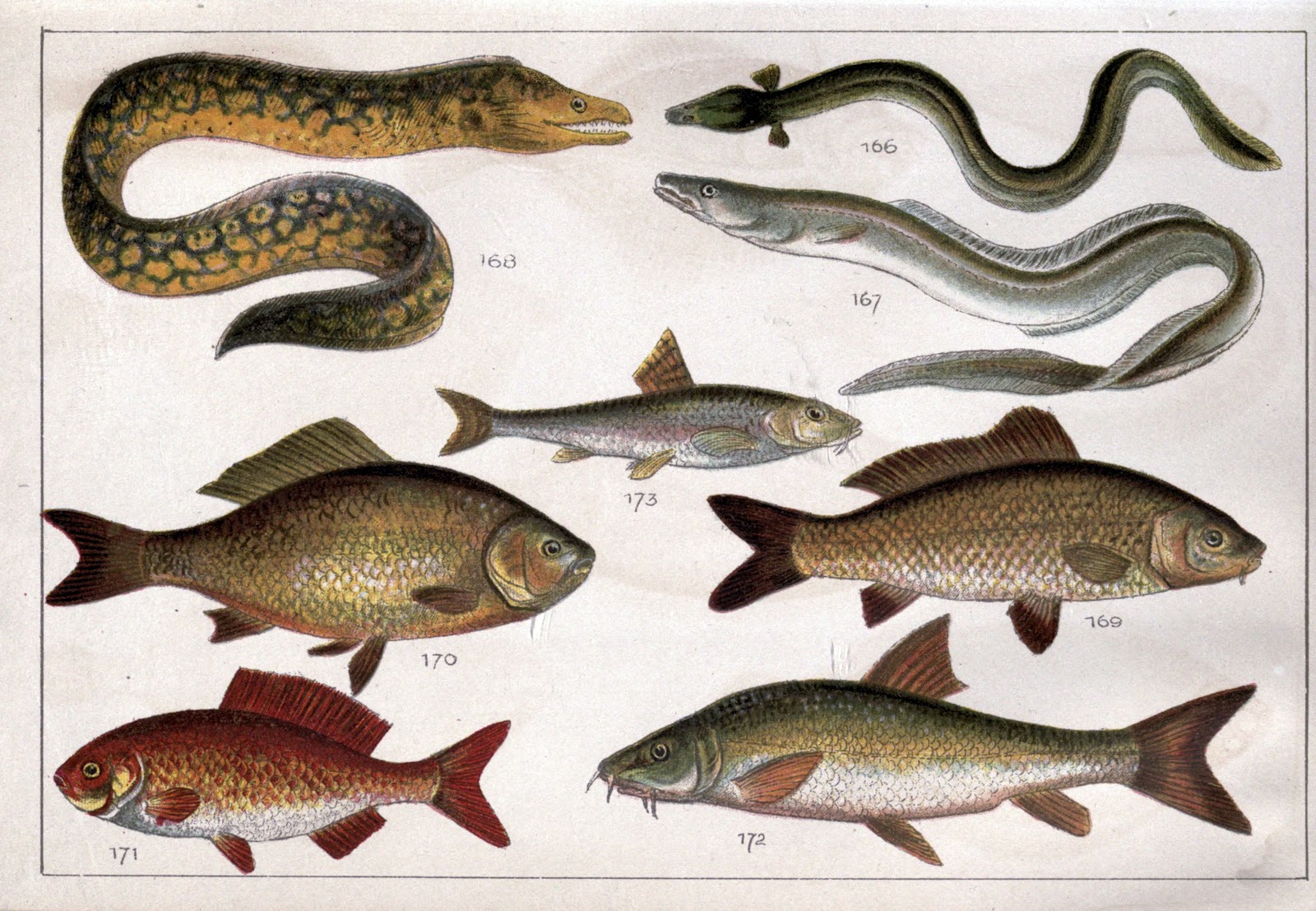 This is an x-ray of the Viper Moray, which is a Moray Eel of the family Muraenidae. The x-ray is presented alongside an illustration of the Mediterranean Moray (fig. 168).

Moray Eels are known for a second set of jaws, called pharyngeal jaws, found in the back of their throat. These jaws possess teeth, and when an eel bites down on its prey with its first set of teeth, the pharyngeal jaws come forward to grab the prey and drag it back down the throat towards the esophagus for swallowing. 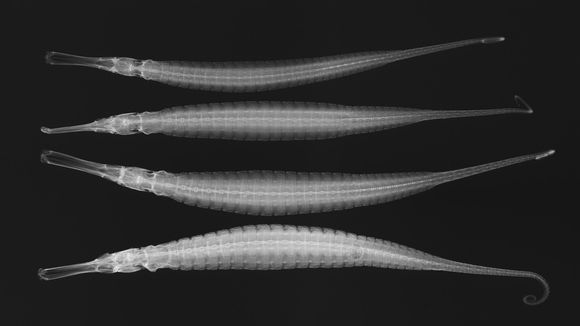 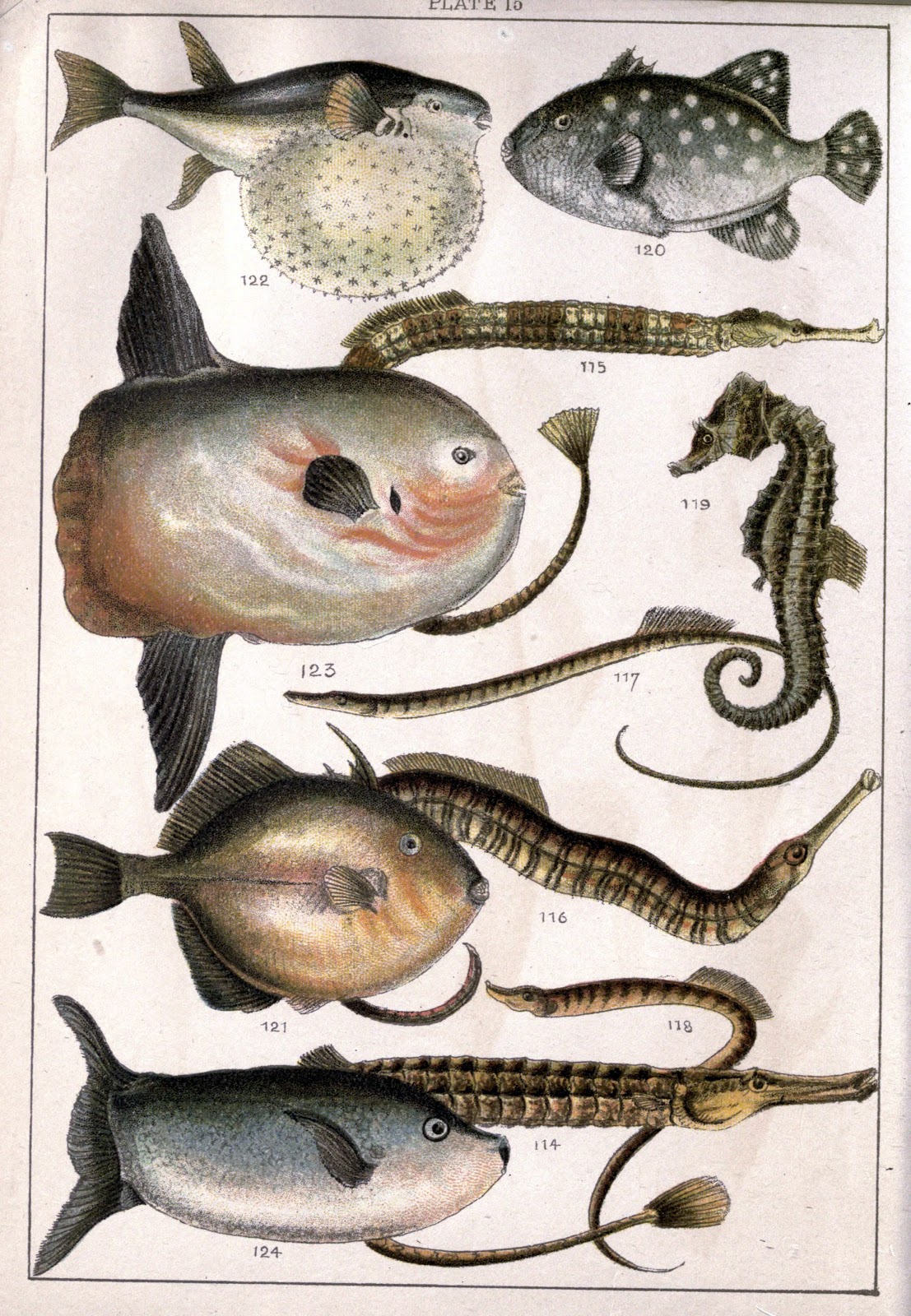 Seen here is an x-ray of an Alligator Pipefish, of the Syngnathidae family and in this case a member of the Syngnathoides genus. Accompanying the x-ray is an illustration of a variety of pipefish, including members of the Syngnathus genus and the Nerophis genus (figs. 114-118).

Sometimes thought of as “seahorses unfurled,” pipefish have a highly modified skeleton formed into armored plating. The numerous bony body rings are used to differentiate one species of pipefish from another. 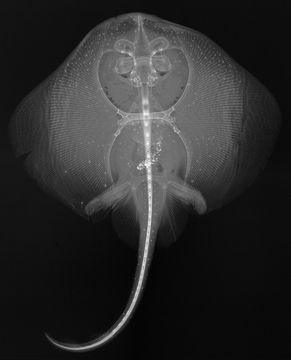 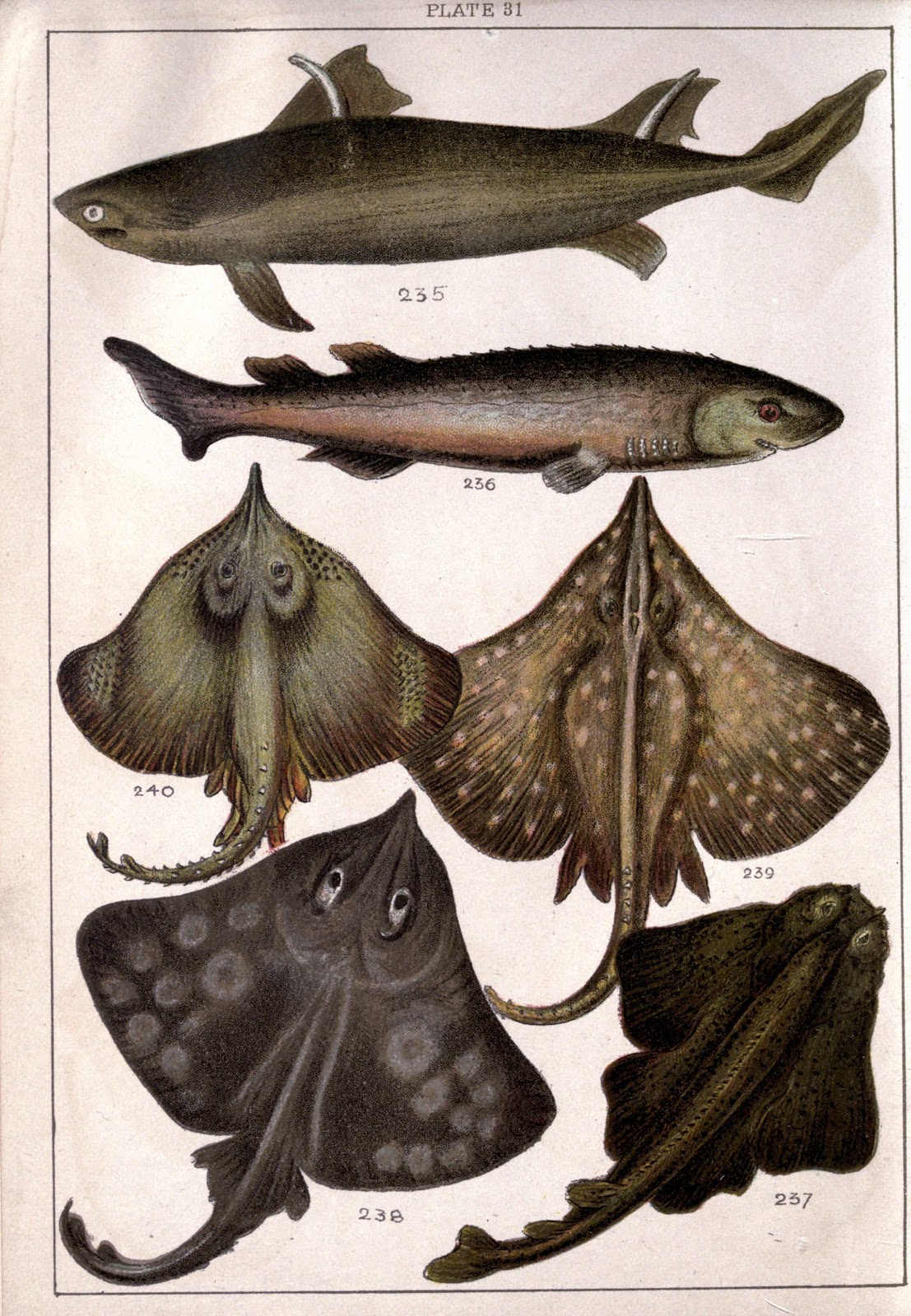 Presented here in lovely x-ray detail is the Monterey Skate, of the family Rajidae and genus Raja. This image is presented alongside illustrations of several other members of the skate family, including the flapper skate and white skate (figs. 239-240).

Skate mating typically occurs in the spring, when females lay numerous eggs which are encapsulated in leathery cases called “mermaid’s purses.” The fossil record dates skates back to the Upper Cretaceous period, 100-65 million years ago. 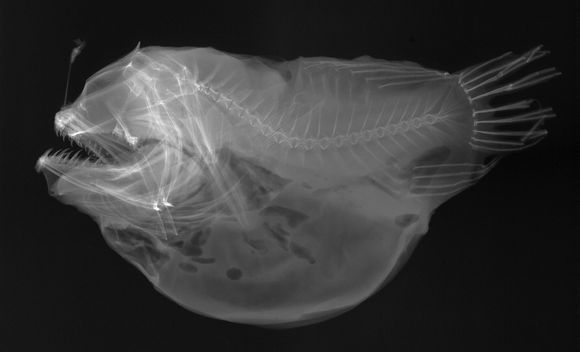 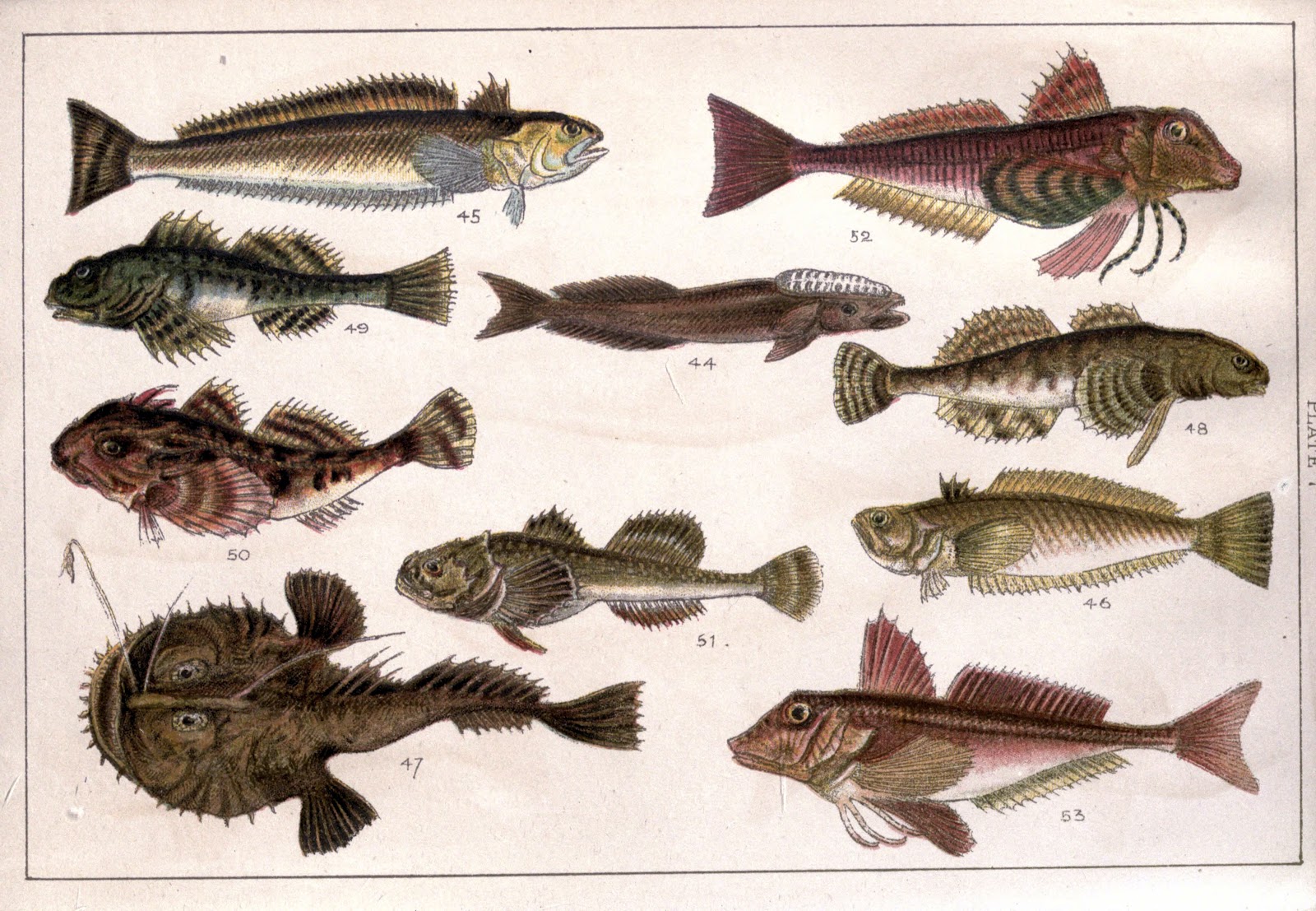 Our final featured x-ray is that of the Bulbous Deep Sea Angler, of the order Lophiiformes and the only species in the genus Dermatias. This species is known only from three specimens. In compliment to the x-ray, we feature Lophius piscatorius, or The Angler, sometimes known as a frog-fish or sea-devil (fig. 47). The Bulbous Deep Sea Angler is of the family Oneirodidae (deep-sea anglerfish), while The Sea-Devil is from the family Lophiidae, or Monkfish.

Anglerfish are so named because of their mode of predation, which involves luring prey with a fleshy lobe on top of the angler’s head. Anglerfish like those of the Ceratioid group exhibit extremely unusual mating practices. Male ceratioids, tiny in size compared with the females, become parasites attached to females. After locating a female anglerfish, the male will bite onto her, release an enzyme that digests the skin of his mouth and her body, and fuze to her at the blood vessel level. Over time, the male slowly atrophies, losing eyes, heart, and even brain, till he is nothing more than a pair of gonads that release sperm in response to hormones in the female’s bloodstream.

You can explore all of the wonders of X-Ray Vision: Fish Inside Out on the official website. Learn more about all of the species featured in the x-rays on EOL’s collection. Finally, browse all the beautiful illustrations in our book of the week on Flickr.

« Previous post
Celebrating Nature’s Best with BHL
Next post »
Book of the Week: The Cabinet of Natural History