Did you know that every second breath you take, you owe to the ocean? Yes, it’s true: the ocean produces more than half of the planet’s oxygen supply which accounts for one out of every two human breaths. More specifically, we owe gratitude to microscopic phytoplankton. These varieties of algae are atrophic organisms, able to produce their own food via photosynthesis. Oxygen is a major by-product of this fascinating process that transforms sunlight into food therefore, algae underpins ALL earth’s ecosystems and life on earth.

Algae may be one of the most altruistic lifeforms I’ve ever heard of. Can you imagine being able to create your own food just by absorbing the sun’s rays and on top of that creating the very oxygen that sustains life? Algae why are you so good to us?

So this week, let’s pay homage to this unassuming and oft overlooked life-form and give it the proper credit it deserves. After all, without algae we wouldn’t be here today.  We are pretty sure that Kintaro Okamura (1867-1935), a famous Japanese algologist from the Meiji Era knew how critical algae organisms are to our continued existence. He was so beloved in Japan for his work on algae that the Japanese Emperor and government conferred on him the Decoration of the Third Class of the Order of the Sacred Treasure. Quite the honor.

It is clear that this man had an intense love affair with algae! Over the course of his career, he self-published a series titled Nihon sorui zufu; english translation: Icones of Japanese Algae, which is this week’s book of the week. You can thank our partner institution the MBLWHOI Library at Woods Hole, Mass. for this wonderful contribution to our beloved, ever growing digital library.

And fret not, if you don’t speak Japanese because Okamura includes all of the taxonomic names and important details in Japanese as well as English. What a champ!

You can also view the illustrations from Icones of Japanese Algae v. 2 in Flickr.

If you are ravenous for more Japanese algae, check out Okamura’s seminal work, Nihon kaisozusets or Illustrations of the marinealgae of Japan, digitized by Smithsonian Libraries.

We’re pretty sure Okamura would want you to know as much about algae as possible so, that you too might come to appreciate and value its complexity, diversity, and role as a foundational building block in the planet’s food chain, i.e., its status as a Primary Producer.

Algae produces about 330 billion tons of oxygen each year.

2.4 billion years ago marks the Great Oxidation Event — the beginning of photosynthesis.  It took another couple hundred million years for enough oxygen to build-up in the atmosphere to support complex life.

The earth’s tallest forests are not on land but, in the ocean. Giant kelp forests, Macrocystis pyrifera, can reach 100 meters (328 feet) in height.

In the future, algae may become a major source of food and fuel. In fact the Navy is already purchasing algae biofuels.

Various types of algae are being studied and used to create anti-cancer drugs.

Why should we take care of the ocean, home of our algae friends?

If you aren’t already convinced of algae’s vital importance to humankind, last May, in the wake of thedevastation caused by the Deep Water Horizon oil spill in the Gulf of Mexico, Barack Obama decreedthat the upcoming month of June will be National Oceans Month. Obama wasn’t the first president to understand the vital role that the ocean plays for all Americans:

Among President John F. Kennedy’s many famous quotes were these:

“Knowledge of the oceans is more than a matter of curiosity. Our very survival may hinge upon it.” – John F. Kennedy, Jr., March 1961 message to Congress.

And a year later he said this…

“All of us have in our veins the exact same percentage of salt in our blood that exists in the ocean, and, therefore, we have salt in our blood, in our sweat, in our tears. We are tied to the ocean. And when we go back to the sea — whether it is to sail or to watch it — we are going back from whence we came.”– John F. Kennedy, Jr., September 1962, Speech given at Newport

So in the spirit of JFK, ask not what the ocean can do for you – ask what you can do for the ocean and its algae citizens.

In June, look for more posts about the ocean and the wondrous life contained therein!

Jacqueline Ford served as the Digital Collections Librarian for the Biodiversity Heritage Library at Smithsonian Libraries. 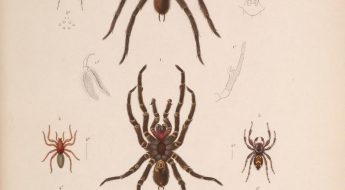