The relationship between man and cow is ancient. Evidence for domestication of cattle dates back to Mesolithic times (10,000 to 5000 BCE). For thousands of years, humans have made use of cows for labor, leather, milk, butter, cheese, meat and manure – among other things. (see diagram below) It is humbling to know that  our modern society, an urbane environment seemingly so far removed from the life of a shepherd, is built on the foundation of pastoralism and animal husbandry. We are indebted to cows, who in-part have helped transform human subsistence into secure existence.  In return for their contributions to mankind, cows only require that we feed, shelter, and defend them against wild animal attacks and disease. Regrettably, the commercialization of the beef industry has changed our ancient relationship with the cow dramatically for the worse.

Over the past century, humans have been reneging on their end of the bargain to provide for the general welfare of these docile creatures. Common today are news stories like ‘Farmers Feed Cows Candy to Reduce Costs’; ‘The Case of the Cannibal Cows’; which led to ‘Mad Cow Disease Kills Mother and Son’. And there is always your standard run-of-the-mill cow cruelty story — all highly disturbing reads, in varying degrees.

This stream of horror lays bear man’s broken contract with the cow. Isn’t it high time we make good on our end of the bargain? Appearing on the scene in the early 1970’s, one young woman named Temple Grandin seemed to think so. 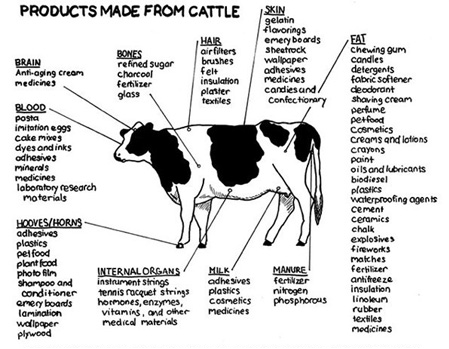 For those of you who have yet to see the Emmy award-winning biopic on Ms. Grandin, the story begins with a brilliant young autistic girl whose affinity with cows commits her to an up-hill journey to reform the beef industry and the inhumane treatment of livestock. The rise of the modern meat-packing industry and the commodification of “cow products” have effectively altered the delicate, and in some cultures highly revered relationship, with our kindly bovine friends.

As a rule, mass-production focuses exclusively on economic bottom-lines rather than respect and fair treatment of Life.  Mentioned earlier, a few of these news stories describe humans being cruel for the sake of being cruel but, in most cases these ghastly stories are motivated by systemic greed. Profit, not barbarism, is the root cause of the perversion of our relationship with cows.

In light of this modern dilemma between profitability and animal welfare, Grandin brought us good news: unlike global warming, the damage that we have done is not irrevocable, we can treat cows humanely and it can make good business sense.

Instead of asking everyone to become a vegan tomorrow, Grandin takes the more pragmatic approach maintaining that humans have always been omnivores, herself included. By working within the realm of possibility, focusing on what people can do rather, than what people should do the famed animal behaviorist revolutionized the beef industry by designing better facilities for cows. Her point-of-view is unique (Temple sees in pictures) and it has helped her understand the needs of cows in a way that you or I cannot.  She has worked tirelessly on policy to train and reform meat-packers, handlers, farm workers, agricultural companies, and big beef purchasers.

The secret to her success is that she rarely uses emotional arguments to win her battles but rather, helps to implement change by working with regulatory bodies that economically punish meat-packing plants that do not pass regular audits. She has also persuaded big beef purchasers like McDonalds and Wendy’s to sever ties with meat-packers that fail these audits. She has proven that economic consequences typically get fast results.

In addition to helping to transform the meat-packing industry, she also worked to change society’s negative perception of autism by showing that her condition is an asset that informs her work. Most laud all of Ms. Grandin’s accomplishments yet, there is some heated rhetoric aimed at Temple for not advocating veganism altogether. In response, Temple cites the laws of nature:

“Unfortunately, most people never observe the natural cycle of birth and death. They do not realize that for one living thing to survive, another living thing must die.”

Added as a corollary to this statement is:

“any animal that has the capacity to suffer when raised for human food deserves to live in an environment that prevents suffering and provides it with a life where it has opportunities to experience positive emotions. Nature cannot be moral or evil because it has no intent.”

Whether you agree with Grandin or not, one thing is for certain, she has worked tirelessly to ease the suffering and preserve the dignity of cows.

Book of the week: The Biggle Cow Book

Since it was Temple’s birthday this past Wednesday, we wanted to gift her with a lovely selection from the BHL. The Biggle Cow Book(1898), has jewels of advice about how to care for our lowing friends:

Agrobiodiversity needs our attention too.

Alongside sound cow care advice, the Biggle Cow Book touches on an important area of biodiversity that gets very little attention: Agrobiodiversity. Conservation of a genetically diverse livestock population is a component of global biodiversity efforts that struggles to get proper exposure. Most conservation efforts are aimed at preserving wildlife biodiversity, a far sexier cause. However, this does not change the fact that the diversity of livestock animals is under threat. Surprised? Did you know that there are over 800 breeds of cattle that have been accounted for, and most of these breeds are at great risk of being wiped out?

The very definition of “domestication” negates the process of natural selection. Instead cattle are bred via artificial human selection of certain high-performing breeds and thus determines which taxa will dominate the livestock landscape. The unfortunate consequence is reduced genetic variation.

The future danger of emphasizing certain genotypes over others is best summarized by author of Livestock Biodiversity, Genetic Resources For the Farming of the Future, Stephen J.G. Hall: “the thousands of breeds that exist were mostly developed in very different circumstances from those of today, but they are not anachronisms, they represent the genetic diversity that will enable the livestock farming of the future to respond to new challenges.”

This is especially true in light of global climate change; who can predict which breed of cow will be better adapted to the environment of tomorrow? Current breeding practice is predictably only concerned with short-term gains like high-milk production or large meat yielding breeds—these are called high-input, high-output breeds (HIHO). Breeding that is driven by profits ignores the long-term viability of cattle and a vulnerable cow population flies in the face of the growing demand for meat: by 2020 global meat demand will increase from 209 tons to 327 tons, milk demand will rise from 422 million to 648 tons. Sound like another sustainability crisis?

Where do we go from here?

As our collective ethical consciousness edges ever closer to a moral crisis, the subjects of livestock conditions, treatment, and breeding practices is often a depressing discourse that most of us would much prefer to avoid. Yet, if you look for the silver-lining you will find it: as with the recent case of the cruelty violations by the Central Valley Meat, California-based fast-food chain supplier to In-N-Out Burger and McDonalds. Both fast-food companies immediately suspended their supplier relationship with Central Valley Meat after a video of brutal treatment by handlers went viral. Grandin’s strategy that stresses the importance of economic consequences as punishment for poor meat-packing practices was at work here.

Additionally, there has recently been more focus on the preservation of cattle breeds. In regards to agrobiodiversity conservation, we can look to the UN’s Food and Agricultural Organization, one of the few organizations whose mission includes promoting research and increasing awareness about livestock biodiversity. They maintain one of the most important resources for researchers, the Domestic Animal Diversity Information System or DADIS database which is a data source for the worlds’ livestock breeds. Additionally, regional efforts in countries like the UK have been leading the way with the established Rare Breeds Survival Trust. The organization has spurred other smaller organizations to form and work to gain funding for agrobiodiversity studies and policy.

When and if you eat red-meat, realize that you are eating a once living breathing creature that gave its life so that you may continue to live yours. This sacrifice should be honored and respected. Let’s wish Temple a very happy birthday this week and thank her for helping us to uphold our end of this ancient contract betwixt cow and human. 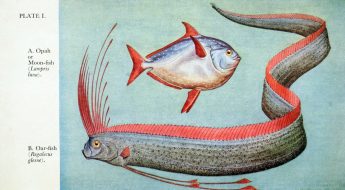