More than just a legacy: Let’s look at the post-1922 literature in BHL

It’s no secret that the Biodiversity Heritage Library (BHL) is a top-notch resource for legacy biodiversity publications.  The current U.S. copyright law states that if a title was published over 90 years ago, that title has entered the public domain and is out of copyright.  This allows the BHL to digitize and provide access to an astounding number of volumes published before 1923.  However, that 1923 cut-off isn’t the end-all, be-all for BHL.  An often overlooked aspect of the portal is that it provides access to several post-1922 titles.

There are four main reasons a post-1922 title would be available on BHL: it’s a U.S. federal government publication, its copyright has expired (relevant to the murky 1923-1963 time period of copyright renewal), it’s been made available via the Internet Archive, or the BHL has obtained permission from a third-party publisher to digitize the title.  Additionally, many BHL partners have digitized titles published by their institutions.  In the case of permissions contracts, they may include a cut-off date, e.g., only pre-2004 volumes may be digitized, a practice often used with subscription-based databases.  For more information about third-party permissions and copyright, check out the BHL Permissions and Licensing & Copyright pages.

In this post, we’ll highlight a few of our favorite contemporary titles, but keep in mind they are just a small portion of what is available.

Digitized by the Boston Public Library, this short pamphlet offers a look into the different animals and plants found in Boston’s network of parks, often referred to as the Emerald Necklace.  Yes, it is a coloring book, but what better way to interest children in urban ecology and their local neighborhood wildlife?  The Boston Park Rangers Nature Book is ready to be printed and shared.  Fair warning though: the maze where you help a red-tailed hawk catch a mouse has already been completed.

Fieldiana is a perfect example of a BHL partner providing access to one of its best known publications.    This Field Museum title has been through a few title changes (currently it is published under two series: Anthropology, and Earth & Life Sciences), and most can be accessed through BHL.  The Botany and Geology series are available up to their respective 2005 volumes.  The Zoological series, on the other hand, is available up to volume 114 of the new series, published in 2008.  That means there’s over 100 years of material available to users!  This includes access to the Flora of Peru (1936) and Tropical American Plants (1961-1975).

ICZN is responsible for the uniform system used for zoological nomenclature around the world.  It goes without saying that keeping up with their rulings is imperative.  Whether in search of a proposal to reject new names from a particular publication or a recommended change in procedure for the electronic age, users can refer to the quarterly Bulletin all the way through 2007.  The ICZN has also given permission for other titles, such as the Official Lists and Indexes of Names and Works in Zoology.  Access to this material can be attributed to the ICZN’s home base: the Natural History Museum, London.

The U.S. National Arboretum Contributions series is comprised of eight specialty publications beginning in 1953 and ending in 1995.  All are horticultural in nature and many are about research on the grounds of the Arboretum.  All are available on BHL.  One that might appeal to a wider readership is about how the cherry trees came to Washington.  It tells the story of how the now famous and much anticipated cherry trees came to be planted around the tidal basin in West Potomac Park in 1912.  It’s a fascinating tale of international diplomacy with details on how the first shipment of trees had to be destroyed after their arrival.  Part history lesson and part insight as to why the U.S. needed to develop an effective monitoring system for foreign plant introduction, which it eventually did.

The Swedish Museum of Natural History

The publication began in 1975 and is useful to anyone with a taxonomic interest in the family Asteraceae, commonly known as the daisy or sunflower family.  Asteraceae is a large plant family with 23,000 accepted species spread across 1,620 genera.  Bertil Nordenstam, who recently retired as editor, is responsible for publishing the journal in its improved form, with announcements and lists of types, research articles and comprehensive works.  A nice history of the publication can be found in Volume 50 of the publication.  Currently, the print publication is held by 34 libraries worldwide, with a print distribution of approximately 600 copies.  Providing it electronically through BHL allows for more researchers and libraries to learn about the publication and have access.

We hope these few examples have inspired you to explore BHL for more recently published works.  Providing both pre- and post-1923 titles to a worldwide audience is all part of making BHL a truly global comprehensive resource in biodiversity literature.  So make sure to explore BHL yourself for modern titles.  You never know what you’ll find! 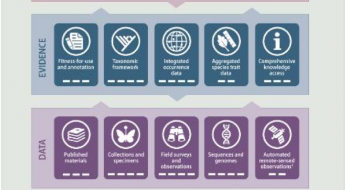