Beauty can be too much for words. So it is with the charm of what many consider the loveliest of the world’s birds, the hummingbirds: Overcome by the dazzling colors of those first tiny skins, early European naturalists reached to the limits of their vocabularies to describe them. The result, nearly five centuries after the first specimens were brought back from a then truly New World, is a large set of remarkably evocative names, hillstars and woodstars, helmetcrests and plumeleteers, jacobins and incas, metaltails and thornbills, emeralds and sapphires and topazes and rubies. 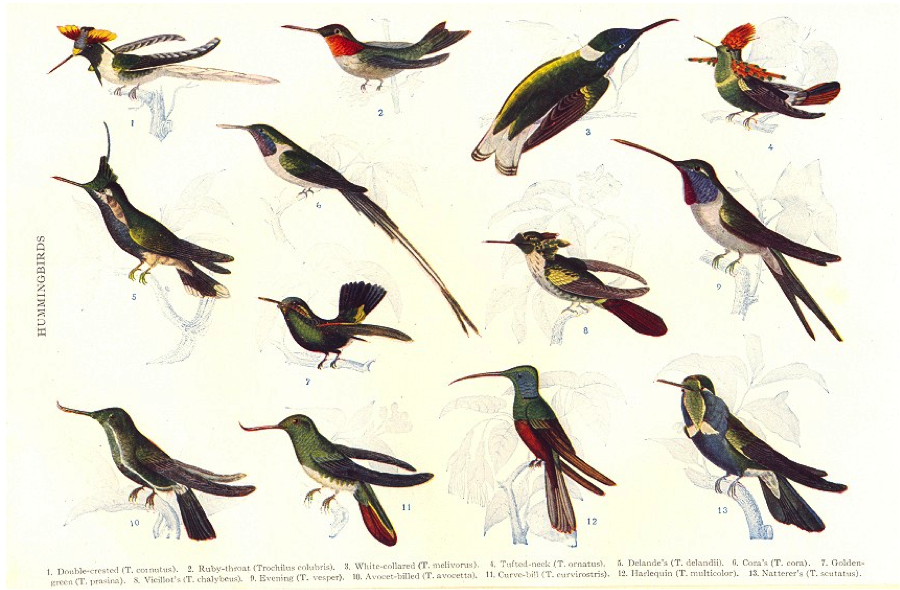 The birds, of course, are every bit as fantastic as their monikers. The 1907 edition of The Americana, the authoritative North American encyclopedia of its day, gave its readers a glimpse into the vast variety of color and adornment so typical of this large family, from the Horned Sungem to the Hyacinth Visorbearer. One of the thirteen birds shown on this appealing plate, however, is conspicuously absent from any modern list of hummingbirds: the extraordinarily colored Harlequin Hummingbird.

That bird was first made known to science a century and a quarter before it was depicted in The Americana. In 1782, John Latham described his new species from a specimen in the collections of the British Museum.

Unfortunately, Latham notes, that unique skin had “no history annexed to it,” and so he was unable to offer any information about the range or the habits of the species he named the Harlequin Humming-Bird.

Five years later, Latham came across another source of information, a drawing by the famous watercolorist Thomas Davies, who had been in the West Indies in 1786. Davies’s rendering of the bird differs from the British Museum specimen, Latham tells us, in its greater length—five inches rather than four and a half—and in the presence of a narrow band of blue green on the back of the head, a character well shown by Latham’s plate in the Supplement to his General Synopsis of Birds. 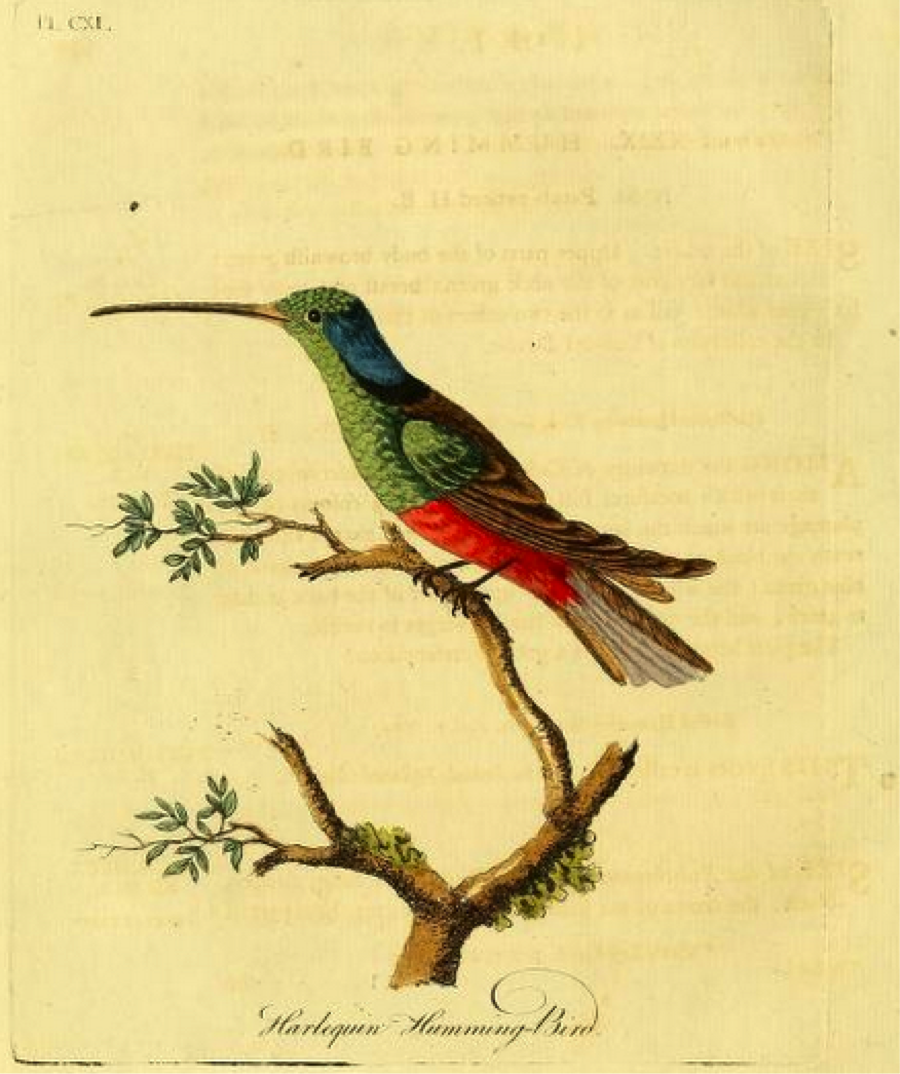 That image and the accompanying description provided the “type” for Johann Friedrich Gmelin, who gave the species its rather bland Linnaean label in 1788, Trochilus multicolor. Latham in turn adopted that name for his 1790 Index ornithologicus, where his brief description of the bird could be read to imply that he had seen further specimens, “in some of which there is a blue-green patch below the nape.”

George Shaw, in his Naturalist’s Miscellany the following year, was able to narrow the range of the Harlequin, “among the rarest species of its genus,” to South America, hardly a bold conjecture in the case of a large, colorful hummingbird. Shaw’s account was accompanied by an awkwardly executed plate by Frederick Nodder, painted, Shaw claims, from the British Museum specimen; the telltale turquoise panel on the upper back, however, reveals that Nodder based his work on Davies’s—or, more likely, on Latham’s description of Davies’s sketch. 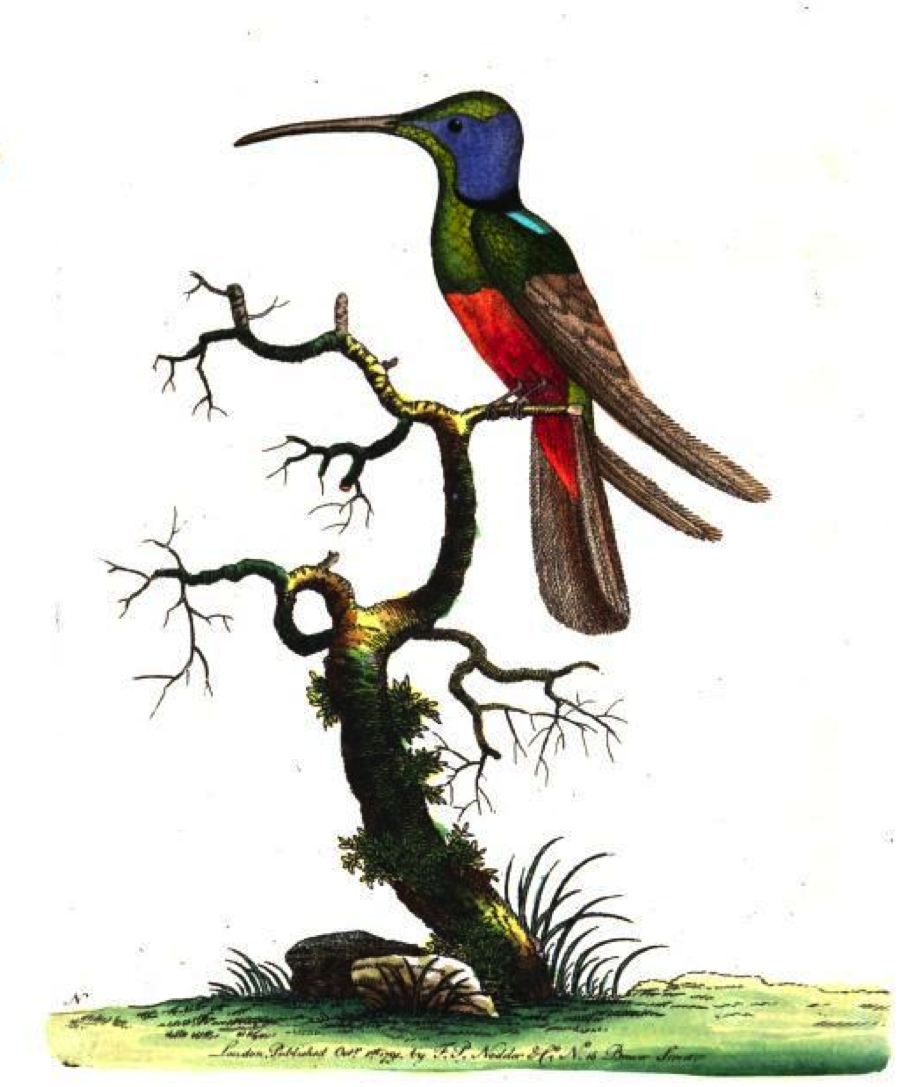 The Harlequin Hummingbird was painted again, by Sydenham Edwards, for Louis Pierre Vieillot’s 1802 continuation of the Oiseaux dorés, a lavish work begun by Vieillot and his collaborator Jean-Baptiste Audebert, who had died in December 1800. Vieillot claims that Edwards had worked directly from the skin in the British Museum; whether that was true or not, a close look suggests that Edwards was quite familiar with Nodder’s plate, too, from which it differs in omitting the nape patch Latham had noticed in the Davies drawing, a mark Vieillot says is indicative of a “variety” of the true Harlequin. 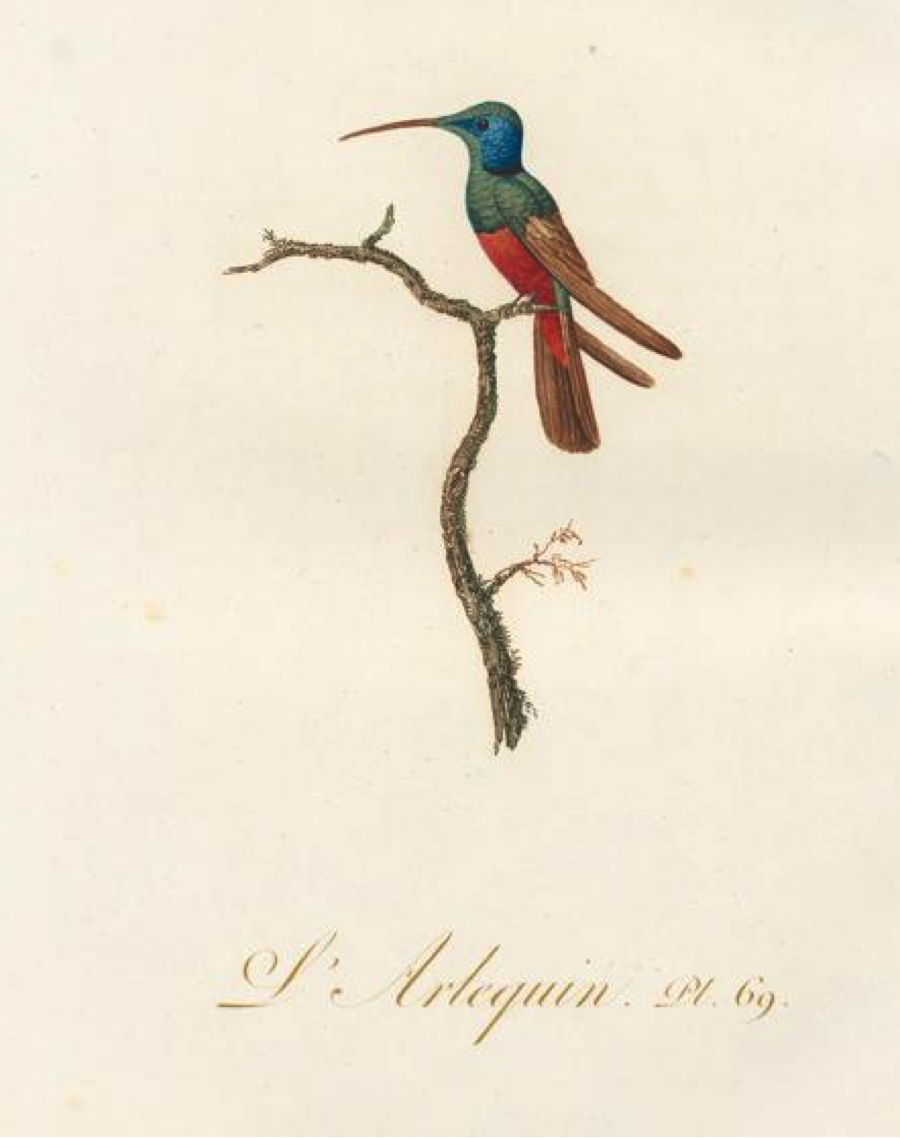 Nearly fifty years after its discovery in a museum drawer, this hummingbird was as mysterious as ever. In 1829, René Primevère Lesson wrote of the oiseau-mouche arlequin that 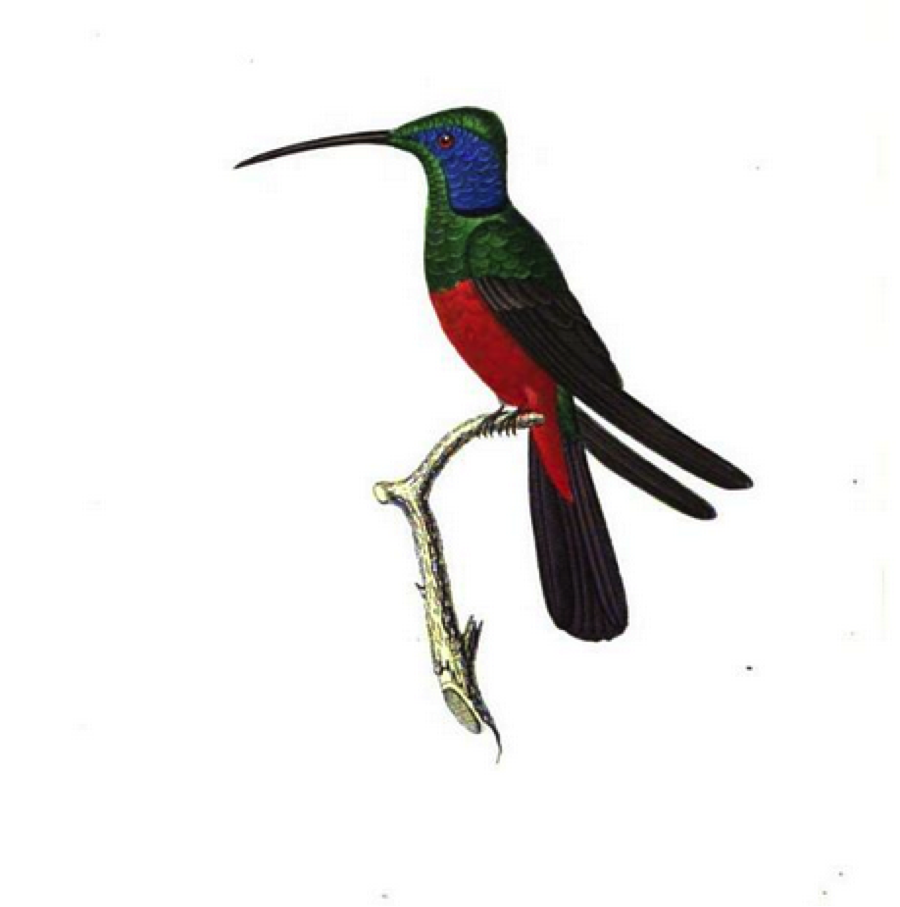 But Lesson had his doubts:

In 1831, Lesson had his answer. In his Trochilidées, he reported that the colibri arlequin of the British Museum had been examined by a Mr. Stokes,

It is a measure of the uncertainty that still obtained in neotropical ornithology—and, perhaps, of the antagonisms that still lingered between French and British naturalists—that William Jardine, two years after the publication of the Trochilidées, could write that

Lesson’s debunking (which Jardine cites) was far more than a hint. Jardine notes, however, that Latham, who would live into the year 1837, had been aware of the rumor. In a footnote to the 1822 edition of the General History, Latham writes that

Jardine included the bird in his own work 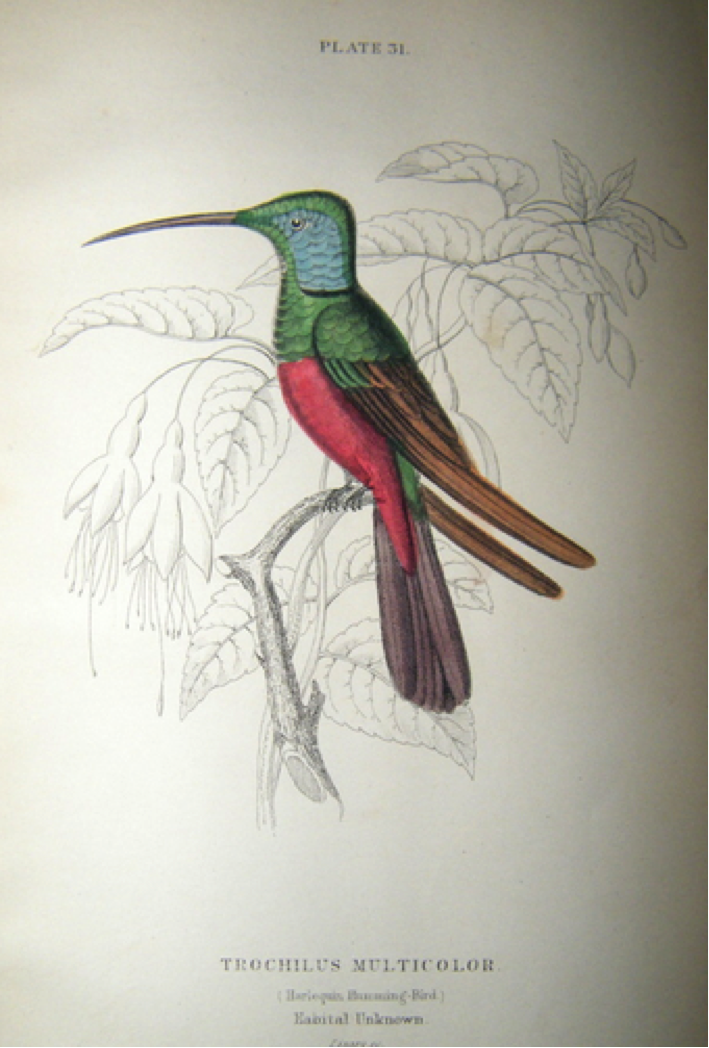 In preparing his great Monograph of the Trochilidae, John Gould was “at all times favoured … with both information and the loan of specimens” from the collections of the British Museum. Nowhere could he find a skin attesting to the existence of the Harlequin Hummingbird—Lesson’s Mr. Stokes most likely had felt no obligation to reassemble the composite hoax once it was revealed. In relying on Latham, Gould writes, Gmelin had described a new species based on

Indeed, of the 95 hummingbirds Latham included in the revision of his General History, Gould considered only about two-thirds “real species,” the other 30 or more, among them the Harlequin, all “so indefinitely described” as to be unassignable to any known bird.

It seems very unlikely that we will ever know who the ingenious and whimsical creator of Latham’s specimen was, or what bird was depicted in Thomas Davies’s equally mysterious drawing. What is entirely certain, though, is that this is not the only case in the history of “trochidology” where a bird turned out to be something else entirely than what its original discoverers thought or hoped. 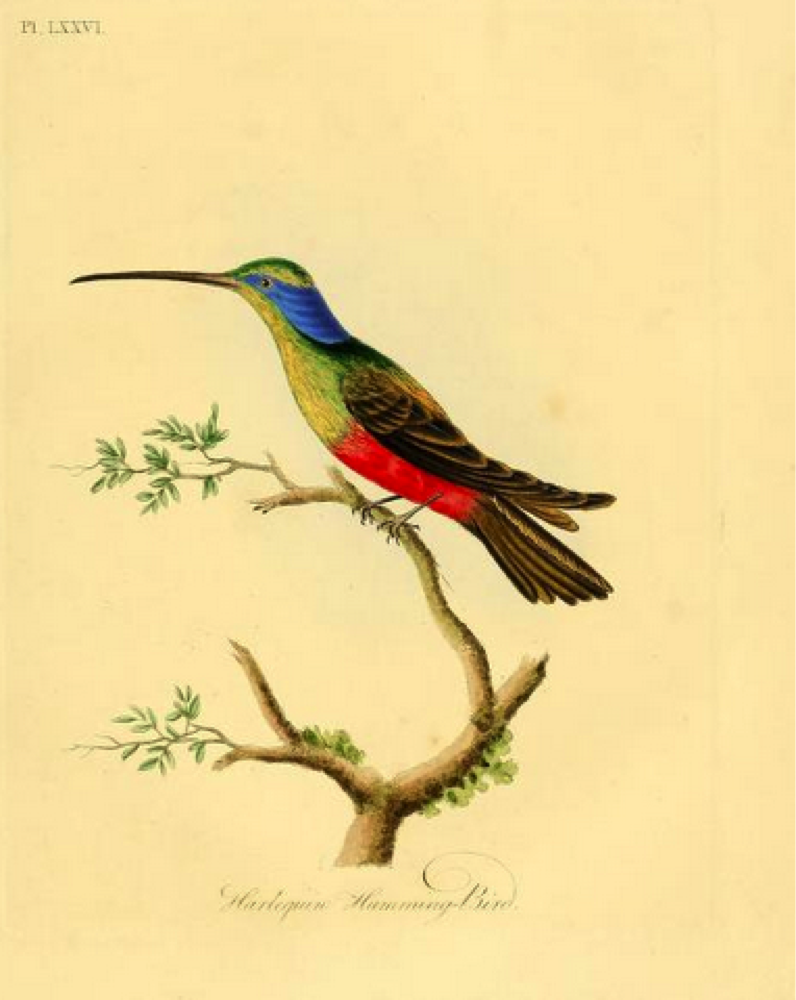 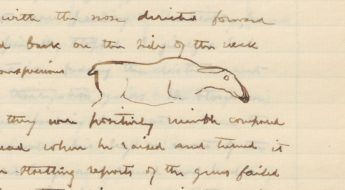 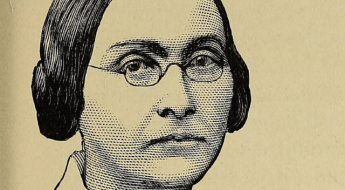 « Previous post
Geoffrey Mwachala from the National Museum of Kenya visits BHL at Smithsonian Libraries
Next post »
More than just a legacy: Let’s look at the post-1922 literature in BHL