Breathing Life Into a Museum Exhibit About Extinction

You are living in the midst of earth’s sixth great extinction event. You’ve been living in it since you were born. So have your parents, your grandparents, your great-great-great-great-grandparents, and all of your ancestors for about 10,000 years. It dates back to the extinction of the mammoths and has been increasingly accelerating as human actions and climate change reshape the balance of our planet.  Within the next century, 75% of the conservatively estimated 8.75 million species on earth may be extinct.

When many of us think of extinctions, we think of the countless species disappearing in the Amazon rainforest, the ocean’s coral reefs, or the forests of South-east Asia. But the truth is that extinctions happen in every corner of the globe. Some are noticeably notorious, others occur without us even knowing that the species existed in the first place. One of the most infamous North American extinctions is the demise of the Passenger Pigeon.

By the time Europeans first came to the New World, approximately 40% of all land birds in North America were a member of the species Ectopistes migratorius, or the Passenger Pigeon. Their population numbered in the billions, and their abundance spurred intense human hunting in the mid-1800s. Less than a century later, the Passenger Pigeon was extinct.

The fate of the Passenger Pigeon, and three other extinct North American bird species (Great Auk, Carolina Parakeet, and Heath Hen), are the focus of the new joint BHL/Smithsonian Libraries‘ exhibit at the National Museum of Natural History: Once There Were Billions.

The exhibit represents the culmination of three years of work for its curators, Gilbert Borrego (former BHL Library Technician for Smithsonian Libraries) and Dr. Helen James (Curator in Charge, Division of Birds, National Museum of Natural History). The histories of these lost species are told through compelling narratives, taxidermied specimens (including Martha, the last Passenger Pigeon), books from the Smithsonian Libraries’ collection (many of which are available digitally in BHL), and images from BHL.

Most people are unaware of how involved and sometimes challenging building an exhibit can be. Several years, countless meetings, copious research, and dozens of individuals are required to bring an exhibit from conception to public launch. Sometimes the most difficult part can be simply honing in on the exact story you want to tell.

“The most challenging part of the exhibit was narrowing down our source material,” said Borrego. “The topic [of the exhibit] was originally much more general, focusing on extinct species. We knew Martha the Passenger Pigeon was to be included, but we looked at many other types of animals and plants before settling on the plight of birds from North America.”

Borrego first presented the proposal for “Once There Were Billions” in 2011, and since then he, James, and an army of scientists, librarians, and museum support staff defined the scope, drafted a script, selected specimens and images, and fashioned layouts for the physical and supplementary digital exhibits.
Once all the foundational work was complete, it was time to bring the exhibit to life. Plaques fresh off the press, freshly-cleaned bird specimens, and carefully conserved books were artistically arranged within two mammoth exhibit cases in the Evans Gallery on the Ground Floor of the National Museum of Natural History.

And voila! This specialized hub for extinction education opened to the public this past Monday, June 24, 2014, and will remain open until October, 2015.

If you’re visiting D.C., be sure to check out the exhibit. And if you’re an art fan, take some time to see the massive bronze sculptures of the birds crafted by artist Todd McGrain as part of “The Lost Bird Project” and situated around the Smithsonian grounds.
If you’re not in the area, you can still enjoy “Once There Were Billions” via the online exhibit, by browsing digital versions of select exhibit books in BHL, or by downloading free, spectacular illustrations of the featured species.
Educating each and every person about the plight of biodiversity on our planet, and the repercussions of doing nothing, is a critical part of ensuring that today’s species do not become just another extinction statistic. Exhibits like “Once There Were Billions” are just one way we can achieve this global awareness. But while you might not be in a position to build a museum exhibit, there are other ways you can help change the fate of doomed species. Supporting initiatives like BHL, which enable the research of scientists trying to document and conserve species around the world, helps prevent species decline.

Everyone can make a difference. What will you do to help curb the tide of the Sixth Great Extinction Event? 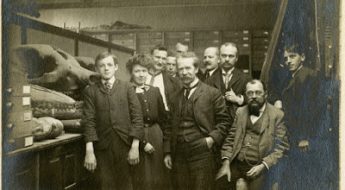