As part of BHL’s mission to ‘improve research methodology by making biodiversity literature openly available to the world as part of a global biodiversity community’, the BHL Secretariat and Partners regularly participate in meetings and initiatives centered on collaborating with other biodiversity organizations throughout the world. One such recent event was the 2nd Global Biodiversity Informatics Conference (GBIC2) held in Copenhagen from 24-27 July 2018.

Organized by the Global Biodiversity Information Facility (GBIF), the meeting convened stakeholders from across the biodiversity informatics community to explore a model for coordinating across geographic and political boundaries to share and link data managed by various biodiversity infrastructures. GBIC2 was organized to build on outcomes and recommendations from the first GBIC meeting held in 2012. The Global Biodiversity Informatics Outlook (GBIO) framework (pictured below), developed as part of that first GBIC meeting, served as a foundation for exploring various considerations–from the cultural to the technological–involved in managing and sharing resources related to biodiversity data, evidence, and understanding. 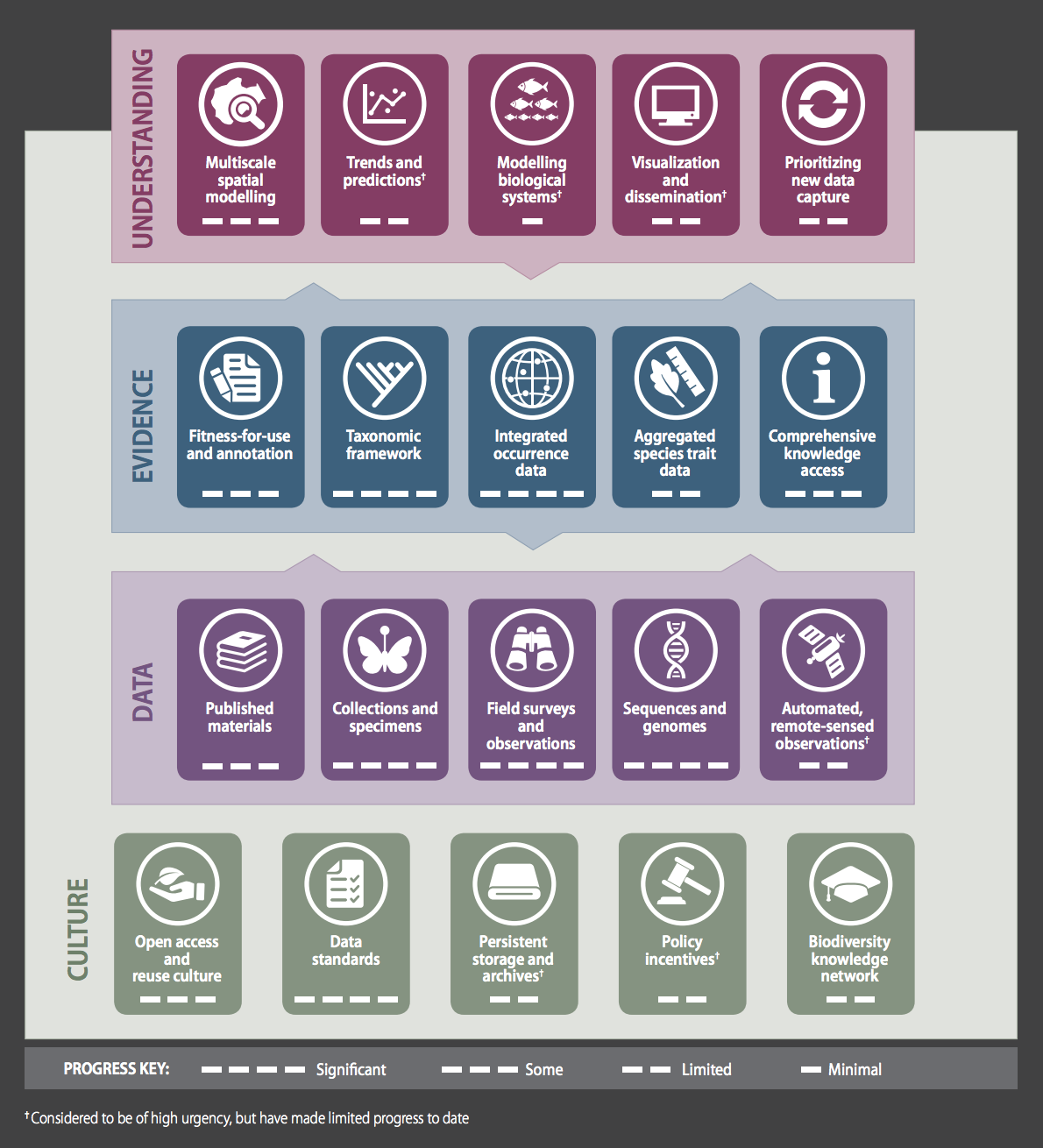 The meeting kicked off with three plenary presentations followed by an interactive exercise to illustrate some of the key components of the current biodiversity informatics landscape. The presentations provided various perspectives from within and beyond the immediate biodiversity informatics. Topics covered experiences in other scientific domains on coordinating international collaboration, perspectives of funding agencies, and background on the GBIO framework and the high-level vision for a coordinating mechanism that would help guide discussions through the rest of the meeting. Speakers included Robert Hanisch, Director of the Office of Data and Informatics in the Material Measurement Laboratory at NIST; Maria Uhle, Program Director for International Activities at the National Science Foundation; and Donald Hobern, Executive Secretary of GBIF.

Following the presentations, the professional consultant firm Taylor + Tyler conducted an exercise with Donald Hobern, Executive Secretary of GBIF, to identify overarching goals, key stakeholders, and the connections as well as challenges between those, all through an interactive use of various toys and bits and other representative figurines. The resulting candidate model was used as a starting point for discussions on global coordination of biodiversity knowledge management, notably in ways that might help inform decisions and policies to protect biodiversity, particularly as related to Aichi Targets and Sustainable Development Goals (SDGs).

On the second day, conference attendees broke out into four groups and held parallel sessions, each organized around one of the following four GBIO components: Biodiversity Knowledge Network; Published Materials; Integrated Occurrence Data; Trends and Predictions. Each of these four groups was co-facilitated by GBIF staff with an invited representative. BHL’s Program Manager, Carolyn Sheffield, worked with GBIF Science Communications Coordinator, Daniel Noesgaard, to facilitate the Published Materials group. Approximately twenty attendees participated in this group, including several of our BHL colleagues from BHL Partner institutions including Patricia Koleff (CONABIO/BHL Mexico), Nicole Kearney (Museums Victoria/BHL Australia), and Lawrence Monda (National Museums of Kenya/BHL Africa). In addition, other participants also hailed from BHL Partner institutions (e.g., Harvard University and Museum National d’Histoire Naturelle), and while they themselves may not be directly involved in BHL, it was a pleasure to have the opportunity to meet and work with them.

The four groups participated in a series of exercises throughout the day to identify challenges facing the component areas, define sample investments for addressing those challenges, and then rank those investments according to criteria such as cost and value. Breakout groups were encouraged to consider not just technical challenges but also social and cultural challenges.

Some themes that emerged in the Published Materials Group included connecting taxon names to literature, assigning and appropriately managing DOIs for historic literature, and enabling more robust linkages between the literature and other biodiversity resources. The day concluded with a discussion of the process as a potential operating model for a coordinating mechanism for globally collaborative initiatives around sharing and linking about biodiversity data.

On the third day, all participants reconvened to debrief. Paul Taylor (of Taylor + Tyler) facilitated a discussion with the session leads to reflect on the experiences of the four groups. All told, the consensus seemed to be that while there were undoubtedly elements that couldn’t be addressed in a day-long exercise, the overall model was one that could be expanded and scaled up.

The report-outs were followed by two plenary presentations on governance models adopted by the intergovernmental organization ELIXIR and the Apache Software Foundation. Jerry Lanfear, Chief Technology Officer of ELIXIR, presented on their collaborative infrastructure and governance for coordinating life science resources across Europe. Ismaël Mejía, Member of the Apache Software Foundation, presented on the values that underlie the distributed network of programmers that form Apache. Specifically, he highlighted the commitment to open source development and merit-based opportunities. The day concluded with open discussions on the models presented and their potential applications for coordinated efforts across the wider biodiversity community.

The final day of the conference provided opportunities for further discussion on the proposed establishment of a coordinating mechanism. Participants reflected on the types of goals that might be achieved—and the types of coordination that might be required—by establishing a coordinated approach to biodiversity data sharing and linking. The group revisited the significance of extending beyond short-term, locally-based project initiatives to seek more globally coordinated opportunities in order to contribute to high impact outcomes such as those outlined in the Aichi Targets and Sustainable Development Goals (SDGs). All told, participants reached consensus on the value of establishing a “light weight coalition” and called on GBIF to take the lead.

The GBIC2 Organizing Committee is now in the process of producing consultation documents outlining a path forward and plans to make these available in multiple languages, including the 6 UN languages. In addition, information from the meeting has already been shared via two sessions at the recent SPNHC-TDWG 2018 Conference in Dunedin, New Zealand:

We look forward to the forthcoming report and continued developments and opportunities for working with our colleagues across the global biodiversity informatics landscapes. Learn more about GBIC2.