Recently, the librarians at the Smithsonian Libraries’ Botany-Horticulture Library uncovered a “mini-mystery” involving one of our titles. It started when the botanical illustrator in the Smithsonian’s Department of Botany got a call from a colleague asking why a work in BHL was appearing with black and white illustrations rather than the beautiful color originals.

The work in question is Britton and Rose’s The Cactaceae, Descriptions and Illustrations of Plants of the Cactus Family (The Cactaceae). The four volume set is an early definitive taxonomic work on the family Cactaceae. When the first volume was published in 1919 it sold for $18, the equivalent of $242.19 today. Noted by a contemporary reviewer as “the most sumptuous botanical publication since Dykes’ ‘The genus Iris,’” The Cactaceae was an ambitious project funded by the Carnegie Foundation. The final work was a result of the combined effort of botanists across North and South America, and the Caribbean islands. One of the reasons the work is so important is that it reexamined type specimens and original descriptions. As noted in the introduction to volume one, it was a necessary task due to many species having been incorrectly identified, descriptions incorrectly interpreted, and common names attributed to the incorrect species.

By doing further investigating on the BHL website, it was discovered that the New York Botanical Garden’s LuEsther T. Mertz Library had provided its copy for scanning, now available in all its technicolor glory.

However, why did BHL have a copy with black and white illustrations in its database? As it turns out, that black and white copy of The Cactaceae had been ingested into BHL from the Internet Archive (IA) through a scan done at North Carolina State University Libraries (see Volume 1 here). For BHL to capture as much of the digitized biodiversity material as possible, it accepts scans of books and journals already present within the Internet Archive corpus that meets a set of subject heading and call number criteria in line with its collection development policy. This was the case with the NCSU Libraries’ copy of The Cactaceae, which is a reprinted version of the original 1919 publication. The publisher reissued it with black and white illustrations. For more information about our ingest of non-BHL member materials from the Internet Archive see this post.

Using BHL’s Feedback link, the librarians requested that the black and white version’s URL be redirected to the color version of The Cactaceae, so this misunderstanding will not happen with a future user. 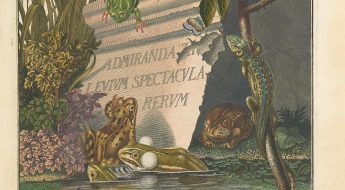