This post was originally published on the Inside Adams blog from the Library of Congress. See the original post here.

In the 19th century naturalists and enlightened amateurs in the U.S. cultivated an understanding of the natural world of this new country by documenting new and known varieties of plant and animal species. One of these scientific pursuits was conchology- the study and collection of marine, freshwater and terrestrial shells. The story of American conchology has the makings of a great screenplay – there is adventure, discovery, and a cast of passionate characters who sought to advance science, but also personalities who practiced ‘species- mongry” that sought fame and money.

Conchology was a popular area of study which is evidenced by the large portfolio of published shell indexes, catalogs, and papers in the 19th century. The Library of Congress has a variety of material that traces the history of 19th century U.S. conchology, but it also has earlier titles including the 1684 edition of Filippo Buonanni’s (1638-1725) Recreatio Mentis et Oculi: in Observatione Animalium Testaceorum Curiosis Naturae Inspectoribus considered to be the first book specifically dedicated to conchology, and as a result, the author became known as the father of conchology. We also have a book on conchology owned by Thomas Jefferson (1743-1826) that was part of the collection sold to the Library of Congress in 1815, Elements of Conchology, or, An Introduction to the Knowledge of Shells by Emanuel Mendes da Costa (Ernst Mayr Library, Harvard MCZ copy in BHL here). Thankfully it survived the 1851 Capitol Hill fire and is available for scholars to use.

There is such an abundance of individuals associated with early American conchology that mentioning every single one would be a dissertation, not a blog post. Therefore this post will only highlight a selection of characters who helped to lay the foundation of conchology in the U.S. If you want to read more about the early pioneers, see “A Sketch of the History of Conchology in the United States” in American Journal of Science and Arts, March 1862.

First up is Thomas Say (1787-1834) who was one of the earliest noted American conchologists, although he is best known for his work in entomology. He was a founding member of the Philadelphia Academy of Natural Sciences and published some of the first accounts of American shells in the Journal of the Academy of Natural Sciences (1817-1826) as well as American Conchology (1830-1838).

Next is Timothy Abbott Conrad (1803-1877) who is more known for his work in geology, so his focus was mainly on the Cretaceous and Tertiary mollusks. He helped edit Say’s American Conchology, and authored American Marine Conchology (1831) and the Monography of the Family Unionidae (1836).

Isaac Lea (1792-1886) was another important figure in conchology. He criticized and corrected some of Conrad’s work regarding classification of the Unionidae- see the Lea and Conrad controversy papers. In my opinion these scientific duels makes history all the more interesting.

Amos Binney (1803-1847) and William G. Binney (1825-1909) are two scientists who played significant roles in 19th century conchology. Amos was an avid collector of rocks, birds’ eggs, and shells and was a founding member of the Boston Natural History Society. He is most notable for his work in malacology (study of the Mollusca animals, not just the shells) of land mollusks. His monumental publication The Terrestrial Air-Breathing Mollusks of the United States (1851-1878) was published after his death. His son William followed in his father’s footsteps and continued to collect and document shells in the U.S. He edited the Complete Writings of Thomas Say (1858) and his father’s Terrestrial Air-Breathing Mollusks of the United States, as well as published checklists, and compiled bibliographies of North American shells.

The history of U.S. conchology would not be complete without mentioning Augustus Addison Gould (1805-1866) who described nearly 1,100 molluscan species. He was a physician, as well as a conchologist, whose research on Massachusetts invertebrates remains a standard reference still used today. He helped found the Boston Society of Natural History with Amos Binney and was a curator for its mollusk collection for many years. He helped to identify and describe the new shells collected during the Wilkes (or U.S.) Exploring Expedition to the Pacific (1838-1842), which was published in Atlas Mollusca and Shells (volume 12 of the Expedition series).

Another figure in 19th century conchology is Constantine S. Rafinesque (1783-1840) who embodied the definition of a passionate 19th century naturalist. He was well-traveled and liberally documented the natural history of the animal and plant kingdom in the Americas and Europe. While many of his contemporaries suspected him of “species-mongry” – creating imagined species to gain fame and money – he was a significant, albeit intense, character among the early 19th century naturalists. To get an impression of his immense body of work related to conchology see The Complete Writings of Constantine Smaltz Rafinesque, on Recent and Fossil Conchology (1864) and for a biography see Constantine Samuel Rafinesque: A Voice in the American Wilderness by Leonard Warren (2004).

The practice of conchology was not limited to those formally educated in the sciences, but also included enlightened amateurs.

In 1839 Edgar Allan Poe (1809-1849) – yes that Edgar Allan Poe – “wrote” The Conchologist’s First Book. In reality, while his name is on title page, he only created a less expensive copy of an existing book to “offer to the public” in which he contributed an original introduction and rearranged the illustrated plates. To learn more about the history of this book see the Poe Museum’s website.

There were also important 19th century government figures such as Senator Benjamin Tappan (1773-1857) and Major-General Joseph G. Totten (1788-1864) who practiced conchology. Major- General Totten, a founding member of the National Academy of Sciences and a regent at the Smithsonian (National Museum), published and described many new species of New England marine Mollusca.

While researching for this post I found that many of the wives or sisters of these conchologists assisted with collecting and documenting specimens. Timothy Abbott Conrad’s sister hand colored many of his illustrations in American Marine Conchology (1831). Thomas Say’s wife Lucy illustrated numerous plates in American Conchology (1830-1838?). The website for the library at the Academy of Natural Sciences of Philadelphia has more on Lucy including images of her work.

Beginning in the 20th century, American women conchologists and malacologists began to publish their own research. Ida Shepard Oldroyd (1856-1940), a pioneer of West Coast conchology, authored The Marine Shells of the West Coast of North America (1924-27) that documented 2,000 species of mollusks from the West Coast. Martha Burton Woodhead Williamson (1843-1922) published “An Annotated List of the Shells of San Pedro Bay and the Vicinity” in the Proceedings of the United States National Museum, 1892: 179-220. Along with reviewing books for Nautilus, Woodhead became a member of the national executive committee of the Isaac Lea Conchological Chapter of the Agassiz Association and was involved with conservation measures related to the abalone industry.

Many of the Library of Congress’s 19th century conchology materials are part of the Rare Books and Special Collections because they contain valuable beautiful illustrated plates or are deemed prized rare items that need special care. However, there are also wonderful examples that can be accessed from the Science and Business Reading Room. Beyond the Library of Congress, there are other resources to explore, including The Academy of Natural Sciences of Philadelphia malacology/conchology resources, which was established in 1812 and is now at Drexel University. Of course, many of the items mentioned above can be found in the Biodiversity Heritage Library (BHL) – they are linked in this blog post where appropriate.

I hope I have piqued your interest in the history of American conchology, so much so that you want to explore more and, perhaps, do some shell documenting of your own. So channel the spirit of a 19th century naturalist – collecting or documenting shells is easy. You don’t even need to be near the ocean because you can also find shells near other bodies of water such as rivers and lakes, and you can also discover shells on the land (terrestrial shells). You can draw and color what you collect like a 19th century naturalist or be a 21st century naturalist by photographing them. For inspiration see the BHL Flickr album from Exotic Conchology, Conchologist’s Textbook, and Conchological Manual. Also, your local library will have field guides to help you identify shells in your location or more general shell field guides that will help you identify the classes of shells.

Jennifer Harbster was a Research and Reference Specialist at the Library of Congress. 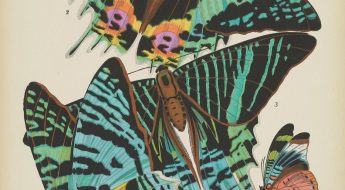 Fashion in the Natural World: Fusing Science with Art